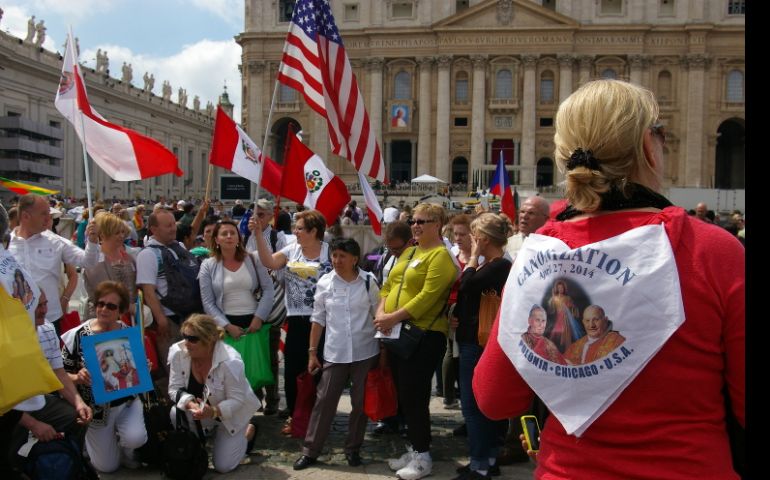 A groups of pilgrims from Chicago of Polish descent gather in St. Peter's Square at the Vatican April 26, a day before the canonizations of Popes John XXIII and John Paul II (NCR photos/Joshua J. McElwee)
This article appears in the Papal canonizations feature series. View the full series.

Vatican City — The sound of singing -- accompanied by guitars, drums, and even flutes -- was wafting through St. Peter's Square Saturday, which has taken on a bit of a carnival feeling as pilgrims around the world converge for Sunday's canonizations of Popes John XXIII and John Paul II.

By mid-afternoon, traffic around the Square had come to a bit of a standstill and walking about it was nearly impossible not to bump into groups from just about every part of the globe.

But clearly prominent among the crowd are pilgrims from Poland, the home of John Paul II, who led the Catholic church from 1978-2005.

Adrianna Jaroszewska, a young woman from the country, said she felt she had to be in Rome for the event.

"My heart tells me that," said Jaroszewska, who was standing in the Square at about noon with 50 others from her parish in Poland. "Because we can't meet our papa in life, so we have to come here to honor him. This is something in our hearts we must do. I know that sounds simple, but it is right."

Yolanda Opiela, a native Pole who emigrated to the U.S. and now lives in Chicago, said something similar.

"We always wanted to come here when [John Paul II] was here -- to meet him, to greet him -- but we couldn't, so now we have a chance," said Opiela, standing with a separate pilgrim group of Chicagoans of Polish descent.

"I think he was such a good person," Opiela continued, after joining her group to sing a Polish hymn. "He's going to be a great saint. He's going to be keeping all of us in a safe place, the whole world."

Jaroszewska and Opiela are just two of hundreds of thousands expected to attend Sunday's ceremony, at which Pope Francis will declare his two predecessors saints. The Vatican said Saturday that retired Pope Benedict XVI will be taking part as well, and will concelebrate Mass with Francis and some 150 cardinals, 1,000 bishops, and 6,000 priests.

Officials at the diocese of Rome said earlier in the week they would not make estimates of the total numbers expected Sunday, but had prepared for "up to 1 million people."

One U.S. bishop told NCR Saturday that Sunday's canonizations were a chance to celebrate separate models of saintliness for the church.

"I think it's just a wonderful thing that we're able to celebrate the sanctity and life example of two holy fathers in my living memory," said Baltimore Archbishop William Lori, speaking by phone from elsewhere in Rome.

Lori also said he thought the news that Pope Benedict would be joining the ceremony is a "sign of communion and continuity" for the church.

"It's a way of saying that although the styles of these four pontiffs vary tremendously, nonetheless they are each in their own way embracing the teaching of the Second Vatican Council and the mission of the new evangelization," said Lori.

"I would say it is a sign of great ecclesial unity and it is a tremendous example for the whole church."

Gabi Weis, a young German woman from Bavaria -- Pope Benedict's native region in Germany -- said "it will be great" to see the retired pontiff.

But Weis, who traveled to Italy for the event with others in the international Catholic movement for young people "Youth 2000," said she also wanted to specifically honor John Paul II.

Some Italian young people, however, were in the Square Sunday to celebrate John XXIII, an Italian who led the Catholic church from 1958-63.

Paola Baiguini said she had travelled some ten hours through the night Friday to Rome from the northern Italian town of Brescia, which is close to John's hometown of Bergamo.

"I am very happy because he's a person from Italy and especially for Bergamo," said Baiguini, standing with a group of some 60 other young people who were laying on mats and in sleeping bags in the Square.

"It is very gracious for Pope Francis to make [John] a saint," said Baiguini.

Logistics to handle the numbers expected by Sunday are intensive.

By Saturday morning, streets near the Vatican had been cordoned off with yellow tape, advising travelers they will be closed to traffic most of the day Sunday. Notices have likewise been placed in nearby neighborhoods, advising residents to move their cars and to consider buying any necessary goods before the event.

Some 2,200 local police are also expected to be deployed near the Vatican Sunday, along with some 2,700 volunteers. There are to also to be some 14 medical advanced medical centers, some 79 ambulance vehicles on call, and a special point for emergency resuscitation.

Some 980 public toilets have also been placed near St. Peter's Square, with some even sitting under the grand 17th Century colonnades designed by Gian Lorenzo Bernini.

The Rome diocese and the Rome government have also set up 19 giant screens in different places throughout the city to allow people to watch the event away from the Vatican. The road leading towards Rome's ancient Colosseum -- where the remains of the Imperial Forum are -- will also be closed to traffic, allowing people to gather there to try and avoid the crowd at the Vatican.

The Rome officials have also set up a giant screen with a direct live link to the event in Milan, several hours north of Rome.

Weis, the young German woman in St. Peter's Square Saturday, said she will be trying to see Francis close-up on Sunday.

"He's just great -- his whole spirit, his mentality," she said. "He's always putting an emphasis on poverty. He's so close to his people, to us normal people. And all of his speeches are just so simple, so that everyone can understand what he wants to say."

Speaking in a crowded pizza shop during lunch Friday, one couple from Sydney, Australia, said they had come to honor John Paul II.

But as the husband turned away for a moment to grab another slice of pizza, the woman confessed: "I'm really here for Francis."

"He's just so humble," she said. "I don't know how to say it right but he just interests me so much more than Benedict."

Following are some short videos of some of the jubilation in St. Peter's Saturday:

Reflections from the water's edge: canonizations in perspective

Newly canonized popes were voices for the voiceless

Where are all the saints without cassocks?

The creation of Sts. John XXIII and John Paul II, as told in tweets