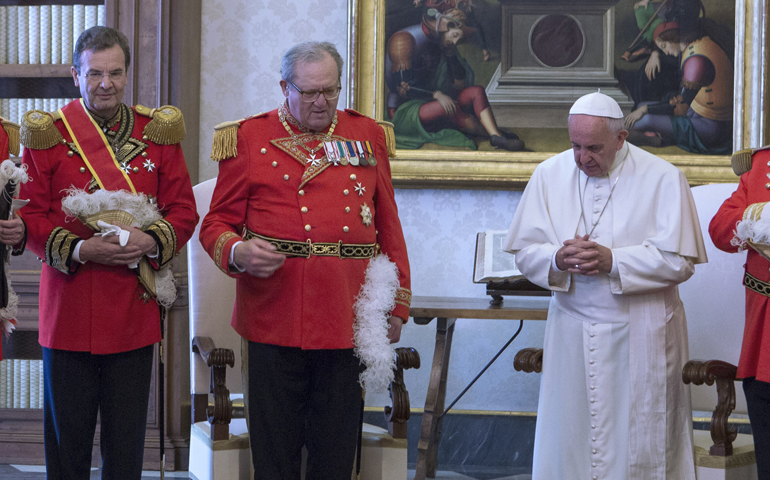 Pope Francis prays with Albrecht Freiherr von Boeselager, left, then-grand chancellor of the Sovereign Military Order of Malta, and Fra Matthew Festing, grand master of the order, during a private audience at the Vatican in this June 23, 2016, file photo. (CNS/Maria Grazia Picciarella, pool)

The showdown between the Vatican and the Knights of Malta has come to a brusque end, with the leader of the historic sovereign order resigning at the apparent request of Pope Francis.

In a statement Wednesday, the Vatican said the pontiff would also be taking over control of the order with the appointment of a new papal delegate in the coming days.

The resignation caps an unusually tense month for the prestigious Catholic lay order, which had been openly resisting a Vatican investigation into Festing's firing of one of their top officials. At times it seemed that one of Catholicism's most storied organizations was challenging the authority and power of the pope.

Festing's resignation appeared to surprise the order's headquarters, which was unable to answer questions about the leader's status with the group until mid-Wednesday morning. The order's website was down throughout the morning, with visitors receiving a message that the server hosting the site was overloaded.

The dispute between the Vatican and the Knights had centered on Festing's decision to fire his order's grand chancellor, Albrecht Boeselager. After Francis appointed a Vatican commission to study the situation surrounding the firing, Festing fought against that move, saying his order's historic status as a sovereign entity gave the Vatican no legal grounds to interfere.

Festing also made unsubstantiated accusations that members of the commission had conflicts of interest, leading the Vatican to issue an unusually pointed statement reaffirming confidence in the group.

A Vatican source with knowledge of the situation said Francis decided to ask for Festing's resignation Tuesday in concern for the health of the spiritual life of the order following the continuing controversy.

The Vatican's statement Wednesday appeared to disregard normal procedure for the resignation of a grand master, which would require Festing to submit notice to the order's governing council and seek their approval of the move.

The Vatican simply stated that the pope had accepted the resignation and the order would be led for the moment by Festing's second-in-command, "pending appointment of the Papal Delegate."

The Knights are not normally led by a papal delegate, as they are considered a sovereign order independent from the Vatican. It is unclear what authority Francis may give the delegate and how their role would fit into the Knights' governance structure.

By Wednesday afternoon, the order had posted a statement on its website saying that Festing had called a meeting of their governing council for Saturday "for the acceptance of his resignation from the office of Grand Master."

The tense saga started Dec. 6, when Festing asked Boeselager to resign following reports that under his leadership a Knights-backed charity had distributed condoms in Myanmar. According to reports, Boeselager was asked for his resignation in a meeting that was also attended by U.S. Cardinal Raymond Burke, the order's spiritual patron.

In a personal statement distributed to members of the order Dec. 23, Boeselager said that he refused to resign because there were "no valid grounds" for his dismissal. He said that the decision to distribute condoms was made by local leaders without his knowledge in the context of three ongoing projects aimed at preventing the spread of HIV/AIDS.

The chancellor said two of the projects were closed immediately, while the third was closed after review of the appropriate ethics committee.

Adding to the controversy were reports that while the order told its members the firing was "in accordance with the wishes of the Holy See," Vatican Secretary of State Cardinal Pietro Parolin had written to Festing earlier clarifying that Francis did not want to see Boeselager sacked.

"These measures must not be attributed to the will of the Pope or his directives," Parolin wrote in a Dec. 21 letter, as first reported by The Tablet.

The Sovereign Military Order of the Knights of Malta, as it is formally known, is a lay religious order that was founded at the end of the 11th century to defend the faith and assist the poor.