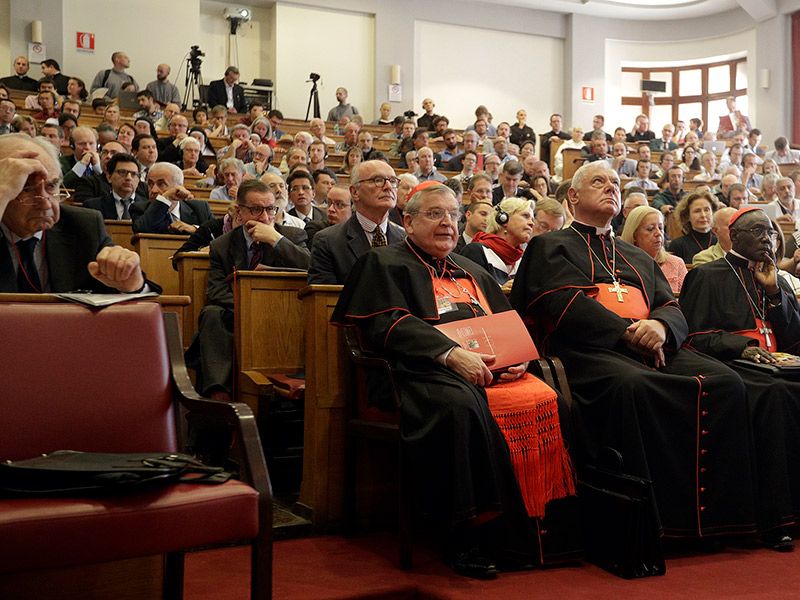 From left, former Chairman of the Vatican Bank Ettore Gotti Tedeschi and Cardinals Raymond Leo Burke, Gerhard Ludwig Mueller and Robert Sarah attend a conference on the Latin Mass at the Pontifical University of St. Thomas Aquinas in Rome on Thursday (AP/Gregorio Borgia)

Vatican City — Fans of the old Latin Mass have descended on Rome for their annual pilgrimage, facing indifference to their cause, if not outright resistance, from none other than Pope Francis.

Ten years after Pope Benedict XVI passed a law allowing greater use of the Latin Mass, Francis seems to be doing everything possible to roll that back or simply pretend it never happened.

In recent weeks, he has affirmed with "magisterial authority" that the reforms of the 1960s allowing for Mass to be celebrated in the vernacular rather than Latin were "irreversible." More recently, he gave local bishops conferences authority to oversee those translations, rather than the Vatican.

The moves underscored that the age-old liturgy wars in the Catholic Church are very much alive and provide a microcosm of the battle lines that have been drawn between conservative, traditionalist Catholics and Francis ever since he declined to wear the traditional, ermine-trimmed red mozzetta cape for his first public appearance as pontiff in 2013.

At a conference Thursday (Sept. 14) marking the 10th anniversary of Benedict's decree liberalizing use of the Latin Mass, the meeting organizer, the Rev. Vincenzo Nuara, didn't even mention Francis in his opening remarks. The current pope was mentioned in passing by the second speaker and ignored entirely by the third.

In fact, it was Sarah's deputy, Archbishop Arthur Roche, who signed the explanatory note to Francis' new law allowing bishops conferences, rather than Sarah's office, to have final say on Mass translations.

Despite the sense of belonging to a previous era, the conference was nevertheless upbeat about the future of the Latin Mass even under a pope who has openly questioned why any young person would seek out the old rite and disparaged traditionalists as rigid and insecure navel-gazers.

Monsignor Guido Pozzo, in charge of negotiations with breakaway traditionalist groups, gave encouraging statistics about the increase in the number of Latin Masses being celebrated each Sunday around the world, with notable increases in the U.S., France and elsewhere in western Europe.

"The old liturgy must not be interpreted as a threat to the unity of church, but rather a gift," he said. He called for it to continue to be spread "without ideological interference from any part."

The program for the 10-year anniversary pilgrimage included vespers celebrated by Benedict's longtime secretary, Monsignor Georg Gaenswein; a religious procession led through the streets of Rome; and multiple Masses. Conspicuously absent from the four-day program was an audience with Francis.

The current pope, though, let his thoughts be known when he delivered a recent speech to an Italian liturgical society. He said there was no need to rethink the decisions that led to the liturgy reforms from the Second Vatican Council, the 1962-65 meetings that modernized the Catholic Church

"We can affirm with security and magisterial authority that the liturgical reforms are irreversible," he said.

Nuara, the conference organizer, denied sensing any resistance to traditionalists from Francis, saying in an interview that the current pope "is a respectful man, so he recognizes all the good that the old liturgy has given the church."

"We are also absolutely respectful of Pope Francis," he added.