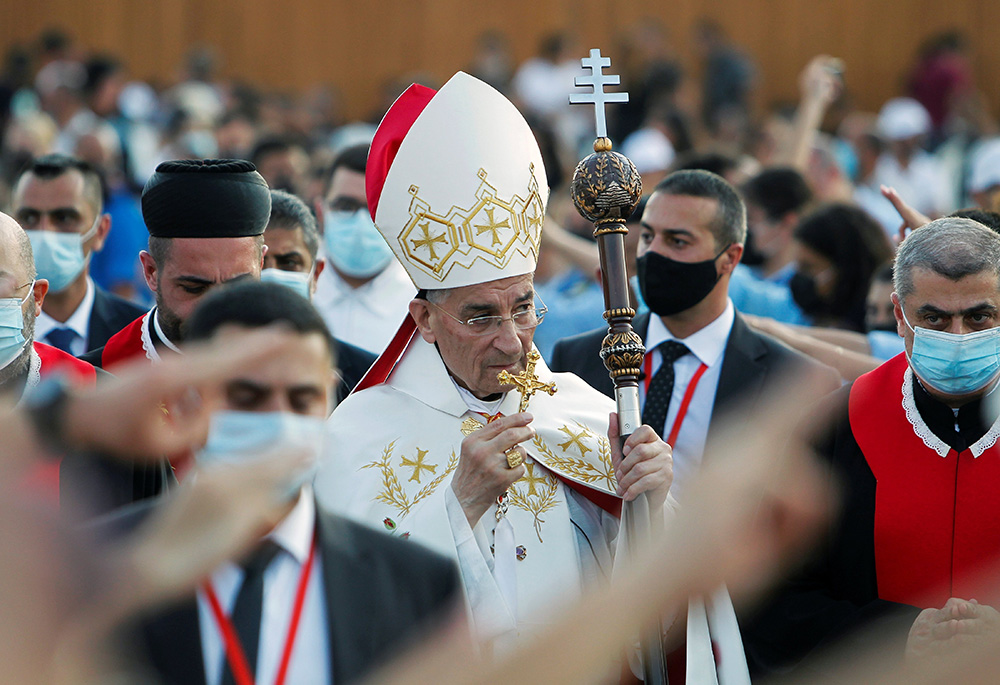 Lebanon's top Catholic leader says a much anticipated visit from Pope Francis will help keep "hope alive" after years of political and economic upheaval have brought the once bustling Middle Eastern country to the brink of collapse.

But when Pope Francis arrives in the country — possibly even later this year — he will not come as "political or economic savior," says the Maronite Catholic patriarch, Cardinal Bechara Rai, but "as one man close to the people."

"He knows that sometimes the human person needs someone who is close, someone who listens to them, someone who can understand their problems," Rai said during an interview on Feb. 26. "The Lebanese on the margins count on it a lot because they feel abandoned."

Rai spoke with NCR during his visit to the Italian city of Florence, where he joined mayors and religious leaders from 20 countries around the Mediterranean gathered for a five-day meeting to discuss collaboration on a range of issues facing the region, including migration, climate change and education.

And the issues facing Lebanon, which has the largest percentage of Christians in the Middle East, are particularly severe: surging poverty rates and an economic meltdown, a widespread fuel shortage, and schools and hospitals facing an uncertain future to name only a few. 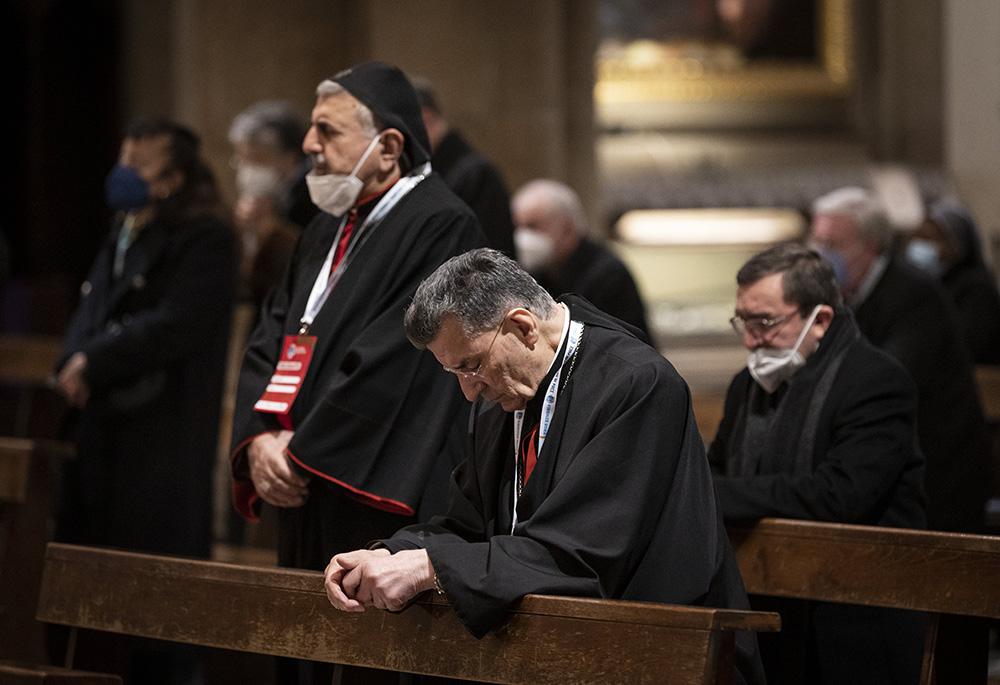 Lebanese Cardinal Bechara Rai, Maronite patriarch, center, and other bishops attending the "Mediterranean for Peace" meeting participate in prayers for peace and against war at the Church of Santa Maria Novella Feb. 24 in Florence, Italy. The shock of invasion in Ukraine led bishops meeting in Florence to suspend their work early and to spend half an hour in silent prayer under Giotto's 13th-century crucifix. (CNS/Italian bishops' conference/Cristian Gennari)

"The best doctors and best university professors and best bankers and best nurses went elsewhere to be able to have a salary that allows them to live," said Rai, adding that the country's currency has lost much of its value and its trade opportunities with other countries have been "hemorrhaging."

Rai, 82, who has led the Lebanese church since 2011, says the church has been on the front lines in responding to the mounting crises.

"The church maintains its institutions, schools, universities, social centers, development centers," but despite doing all it can to help people find work, he lamented, "people manage to leave."

In February, the Vatican's foreign minister visited the country, where he offered a blunt assessment of the situation on the ground: "The Lebanese people continue to suffer greatly," said Archbishop Paul Gallagher. "Everyone can see it."

He went on to express his concern over the deep divides within the country, which faces a major general election on May 15, the first since the country devolved into chaos following mass protests and government resignations in 2019.

The situation has only further deteriorated since an August 2020 explosion in Beirut's port, which killed over 200 people, injured 7,000, left 300,000 homeless and critically damaged its port, which drives much of the capital's economic activity. Since then, there has been an ongoing investigation into who was responsible, leading to further finger-pointing and blame-shifting. 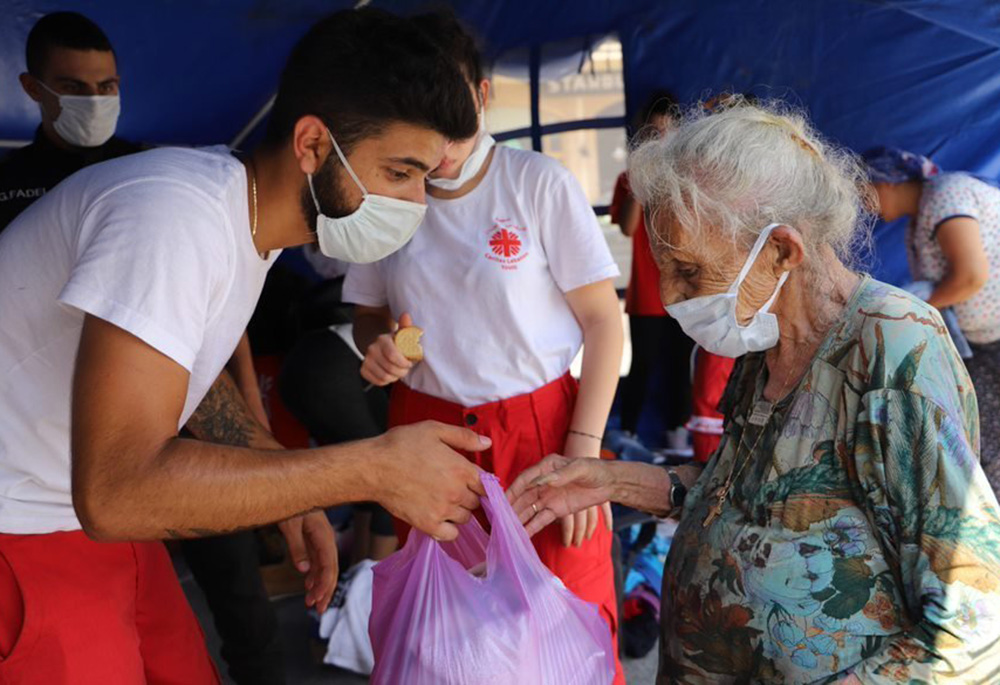 Caritas Youth volunteers are pictured in an undated photo distributing clothing in the aftermath of the Aug. 4, 2020, Beirut blast. As Lebanon's economy began to unravel, individual and collective outreach initiatives began; the port blast worsened the situation. (CNS/Caritas Lebanon)

Strong and anti-corrupt leaders are needed, says the Lebanese patriarch, who says the much-delayed democratic elections must take place.

"We are denouncing each and every attempt to postpone the elections," Rai said, while noting that it is a challenging situation as citizens are "fed up with the authorities."

The country's diversity — with Muslims, Orthodox Christians, Protestants and Maronite Catholics — means that the church does not want to influence or support particular candidates, but instead wants to remind people "to exercise your vote."

In recent years, the Iran-backed Shiite Muslim group of Hezbollah has had a tremendous influence in the country's political and commercial life. Meanwhile, Lebanon's President Michel Aoun is a Maronite Catholic who is also a Hezbollah ally.

While political and religious coexistence has helped anchor the country historically, its long-standing tradition of pluralism is threatened by increasing divisions. The Vatican, as Gallagher reiterated during his recent visit, has offered to help facilitate a national dialogue among the country's political leadership if its leaders desired such a mediation.

"The Vatican is always ready to do this," Rai confirmed. 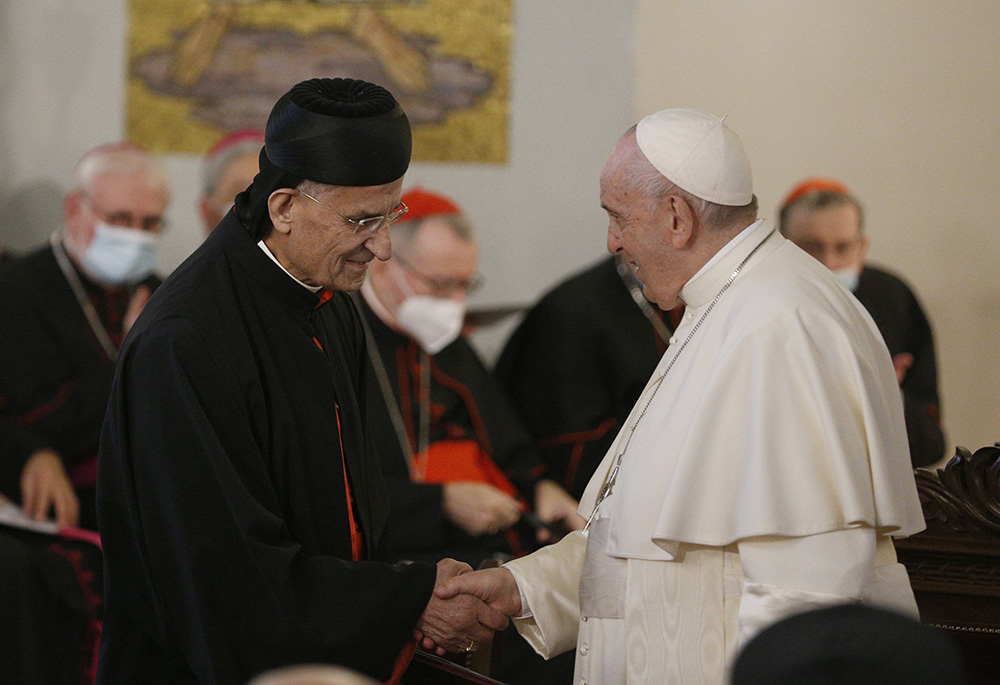 Cardinal Bechara Rai, Maronite patriarch, greets Pope Francis as the pontiff arrives to lead a meeting with priests, religious, deacons, catechists and members of church groups and movements at the Maronite Cathedral of Our Lady of Grace in Nicosia, Cyprus, Dec. 2, 2021. (CNS/Paul Haring)

Meanwhile, tentative plans are underway for an eventual papal visit, one Francis has promised to make for several years but long delayed due to political instability.

Last month, Gallagher said that Francis "wants to come to Lebanon, very soon," but added "it remains for us to define the meaning of the word 'soon.' "

Rai also demurred from commenting on the exact timeline, saying, "I think that some political stability is necessary," but said with confidence that a papal to visit to Lebanon will take place.

"A visit of the pope encourages the Lebanese," he said, and reminds them that despite the difficulties in recent years that "nevertheless, they are not abandoned."