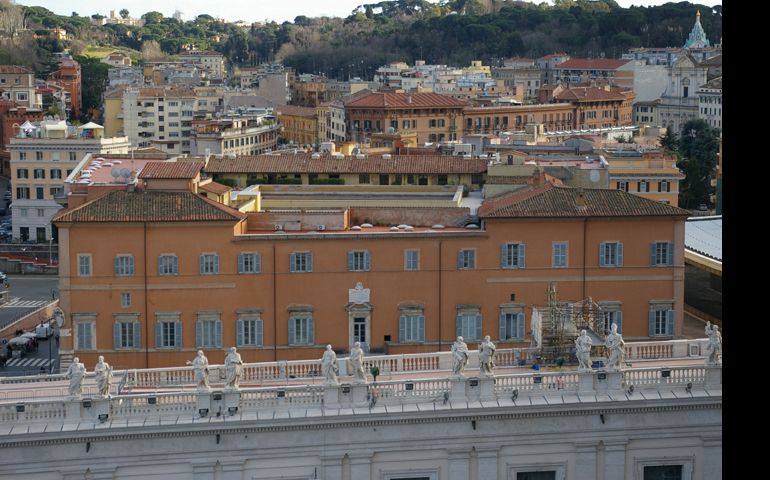 The exterior of the Vatican's Palace of the Holy Office, which houses the Congregation for the Doctrine of the Faith. (NCR photo/ Joshua J. McElwee)

Vatican City — A group of prominent global Catholic theologians, priests and bishops who have been criticized by the Vatican's chief doctrinal office have come together to call for a new process for theological investigations in the church that would be marked by openness and transparency instead of deep secrecy.

In a letter sent to the Vatican's Congregation for the Doctrine of the Faith last month, the theologians argue that current procedures for investigations -- characterized often by a lack of adequate defense or possibility of appeal -- are "contrary to natural justice and in need of reform."

The writers sharply criticize current practice. They say that current norms are outdated and follow a model based on "the absolutism of sixteenth and seventeenth century Europe." They identify that:

The last point carries special significance, as many who have been investigated by the Vatican describe the process as particularly debilitating.

Jesuit Fr. Gerald O'Collins, who assisted famed Belgian Jesuit Fr. Jacques Dupuis with a doctrinal inquiry that continued for three years, has said the stress of the process led to a hospital stay and perhaps even an early death for Dupuis.

Related: A look back on Dupuis' skirmish with the Vatican

Among the signatories to the new document, a copy of which was obtained by NCR, are some of the highest profile names known to have suffered investigations in recent years: Fr. Roy Bourgeois, Loretto Sr. Jeannine Gramick, St. Joseph Sr. Elizabeth Johnson, and Australian Bishop William Morris.

Organized by two others who have also faced investigations -- Irish Redemptorist Fr. Tony Flannery and Australian former priest Paul Collins -- the letter proposes new guiding principles for the doctrinal office and a new possible procedure for investigations, moving final responsibility for the matter to the Vatican's office for the Synod of Bishops.

Current investigatory procedures, the letter-writers state, "are out of keeping with contemporary concepts of human rights, accountability and transparency that the world expects from the Christian community and which the Catholic Church demands from secular organizations."

The writers say they want to propose a new approach "to reflect the attitude of Jesus and to integrate values that the world sees as basic to a functioning, civilized society."

They call for a new set of principles that involve "a just and equitable process" and presumptions of "sincerity, innocence, and loyalty to the church on the part of the person being investigated."

Flannery, who was suspended from priestly ministry by the Vatican in 2012 primarily for his public support of women's ordination, told NCR that he and Collins took up the project earlier in the year and sent the letter in early March to Pope Francis and Cardinal Gerhard Muller, the head of the doctrinal office.

They also forwarded copies to Boston Cardinal Sean O'Malley and Honduran Cardinal Oscar Rodriguez Maradiaga, who both serve on the pope's advisory Council of Cardinals.

"I suppose really what we're looking for here is that the issue be open for discussion," said Flannery. "Obviously, the system that is being used currently ... is seriously abusive and unjust and the church needs to recognize that and begin to look for a better way of doing it."

The letter-writers propose eight principles that should be followed in any Vatican investigation of a theologian. They center on requests for an open process, marked by opportunities for theologians to respond to allegations made against them.

They also ask that anonymous reports or denunciations of theologians' work be disallowed, saying this will "stop frivolous claims by totally unqualified individuals or organizations."

The writers also mention that often in investigations a theologian's work is taken out of context and call for involvement of those being investigated "from the beginning" to help clarify any issues immediately.

Beyond the eight principles, the letter-writers also include an outline of what they call a "more just and fair procedure" that could move responsibility for investigations to the Vatican's synod office.

They envision that such a procedure would take place in two steps: First, with a limited investigation at the doctrinal office; and then, if necessary, through a seven-member expert committee set up by the synod office. Four of the committee members would be appointed by the Vatican; three by the theologian in question.

Within six months of the start of the investigation, they suggest that the committee would outline a "process of reconciliation" between the theologian and the universal church.

Flannery said that the proposal to use the synod office was just one idea put forward by some of the signatories of the letter. He said he understood that "it's probably asking a bit much" that the synod "would be sufficiently coherent to do anything like that as it is at the moment."

While the writers have not received any sort of formal notice of receipt from the Vatican, Flannery said he received a package from his superior in his religious order April 15. Inside the package was a copy of "To Promote and Safeguard the Faith," a 2015 publication by the doctrinal congregation outlining its norms and procedures.

The package was originally sent to the superior by Spanish Archbishop Luis Ladaria Ferrer, a Jesuit who serves as secretary for the doctrinal congregation and is a member of the Vatican's International Theological Commission.

Most of the letter's signatories have been subject to high-profile investigations by the doctrinal office, and many have lost their positions because of the results.

Morris was bishop of the rural Australian diocese of Toowoomba from 1992 until 2011, when he was forced to retire by Pope Benedict XVI for suggesting the possibility of ordaining women.

Bourgeois was dismissed by the Vatican from the Maryknoll Fathers and Brothers in 2012 for taking part in an illicit women's ordination ceremony.

Gramick is the co-founder of New Ways Ministry, a gay-positive advocacy and ministry group. The doctrinal congregation issued a notification against her writings and activities in 1999.

Johnson is a noted theologian at Fordham University whose 2007 book Quest for the Living God was subject to a 2011 doctrinal evaluation by the U.S. bishops' doctrine committee. While she is not known to have been under investigation by the Vatican, many such investigations are kept secret.

Fr. Charles Curran, who lost a tenured position at The Catholic University of America in 1986 after the Congregation for Doctrine of the Faith found him unfit to teach Catholic theology largely because of his writings on sexual issues, is also a signatory.

Other signers include: former Australian Auxiliary Bishop Patrick Power, who has been critical of the church's response to clergy sexual abuse; and Spanish Benedictine Sr. Teresa Forcades, a social activist, medical doctor, and theologian.

Flannery was not exactly optimistic that the letter would have a huge impact, but he said he hoped it would bear fruit eventually.

"There is no way that I will ever get back into ministry," said the priest.

"I am 69 years of age," he said. "I have decided to devote my energies as best I can, at least for the next couple of years, to trying to highlight in every possible way the injustice of procedures within the church."

"Maybe what I do now might bear some little fruit in about 100 years' time," said Flannery. "Because, you know, that's the way the church operates."

Vatican | In letter to CDF, theologians and bishops call for reform of Vatican doctrinal investigations