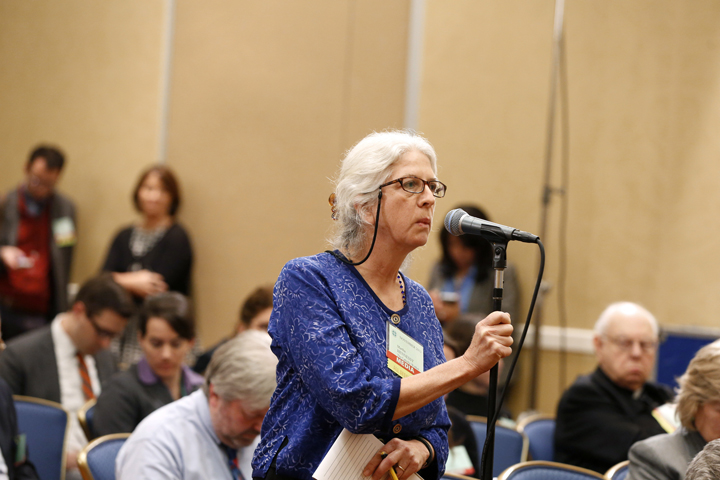 Martha Hennessy of the Catholic Worker poses a question during a news conference at the bishops' annual fall meeting in Baltimore Nov. 12, 2013. (CNS/Nancy Phelan Wiechec)

The complexity, moral and otherwise, of 21st century war wasn't on the agenda of the U.S. Catholic bishops as they gathered in Baltimore for their annual meeting. But the questions roiling the airwaves and internet universe in the wake of the Paris bombings and executions the previous weekend intruded in several ways on the otherwise placid proceedings inside the Marriott Waterfront Hotel.

During a press briefing following a morning of opening speeches and business items setting the stage for the rest of the three-day meeting, Martha Hennessy, an anti-war activist and granddaughter of Dorothy Day, came to the microphone amid questions about religious liberty and other such matters.

She noted that Pope Francis two months ago had held up her famous grandmother, founder of the Catholic Worker movement, as one of four "admirable Americans" worthy of emulation. Three of those mentioned, including her grandmother, "were Ghandian pacifists who believed in non-violence."

Hennessy, representing The Catholic Worker newspaper in New York, wanted to know if Archbishop Joseph Kurtz of Louisville, president of the United States Conference of Catholic Bishops, would condemn what she believed was the inevitability of deeper war, including a ground invasion, with Syria in reaction to the weekend's tragic events. "Will you please speak out as head of the U.S. Catholic church, in clear and unequivocal terms, that this ground invasion is unacceptable?"

The conference, responded Kurtz, "will continue to approach areas of defense of the innocent in the traditional teachings of the just war theory." He said the bishops first would have to see an actual policy regarding the latest acts of terrorism "in order to develop a proper response to it. But you're absolutely right in that we would want to be in union with our Holy Father and see war is not a solution to problems."

He implied that at times a use of force might be justified "not so much in the Catholic worker movement but in some of our traditional analysis and teaching that talks about the defense of people who are being attacked. But until we see what the issue is, I can't comment on what our policies would be except to say that the statements the conference has made in the past would probably be a good indication of the direction we would go."

Hennessy was back in the afternoon, following an impassioned plea to his brother bishops by Archbishop Timothy Broglio, who oversees the Archdiocese for the Military Services, for more priests to act as chaplains. The ranks of chaplains available to care for members of the service and their families are being depleted because some priests are aging out and because of a reluctance of diocesan bishops, many dealing with priest shortages in their own dioceses, to encourage priests to become military chaplains.

Broglio pleaded with bishops to consider providing priests, either temporarily or long term, to care for Catholics who are often far from home and in dangerous circumstances. Military recruiters seeking chaplains normally have a position of prominence just outside the main meeting room when the bishops gather.

Hennessy this time quoted from Pope Francis's speech before the United Nations: "War is the negation of all rights and a dramatic assault on the environment. If we want true integral human development for all, we must work tirelessly to avoid war between nations and between peoples."

She made reference also to the upcoming Year of Mercy and to Francis's reference to a "piecemeal" world war and his assessment that the world is witnessing violence inflicted for profit. "Would you publicly support a cease fire as opposed to the bombing that has already started on the part of France?" she asked Broglio. "Would you publicly support, as a Catholic and as military vicar, a call for a ceasefire and a unity government as opposed to making war?"

"I don't know that it is my responsibility to call for a ceasefire," responded the archbishop. "That's a political decision, or a decision that should be made by those who have the responsibility. I certainly serve people who are profoundly interested in the cause of peace because for the past 15 years they have been paying for -- whether it's piecemeal or wholehearted -- the war that's been going on for the past 15 years. And they would certainly be interested in anything that would further the cause of peace."

It perhaps is not surprising that Hennessy was unable to extract promises from the hierarchy. Broglio, after all, was able in his speech to the assembled bishops to quote Francis encouraging those who minister to the troops.

Hennessy, in an interview with NCR, insisted that getting beyond war would require "overcoming our fear" and taking a candid look at U.S. responsibility for the current situation. "We go back to the Gospel teaching: 'Love your enemy; thou shalt not kill.' What does that look like in the 21st Century? We need to confess our sins. ISIS (the Islamic State, blamed for the Paris terror and other atrocities) did not grow out of a vacuum. What is our responsibility to previous wars?"

"What is our responsibility regarding our 2003 invasion of Iraq, where the suffering is exponentially worse?" In a world where war no longer seems to have rules, where conventions of the past are impossible to apply to terrorists, she turns the question of what can be done back on what she perceives as the U.S. need for "a permanent war economy."

"So whose fault is that the rules of war have been so violated?" she asked. "We could ask ourselves that question. And when we talk about bombing ISIS in Syria … we keep thinking that our military power and our use of weapons is a solution. But we know it's not the solution."