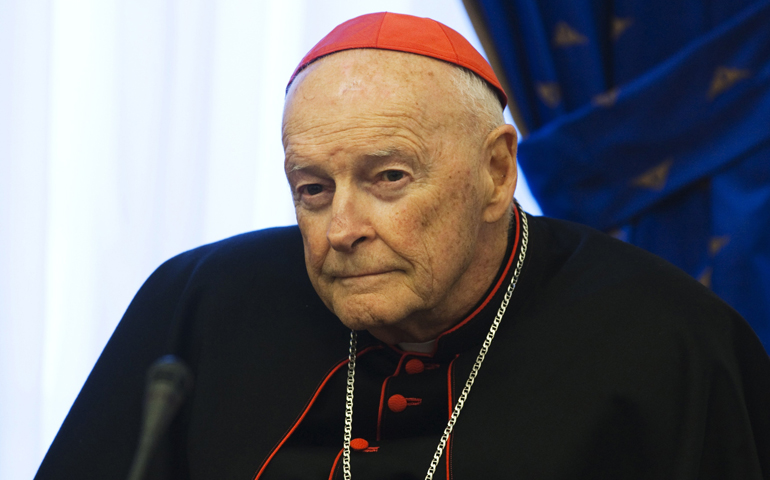 As fate would have it, 82-year-old Cardinal Theodore McCarrick was in Rome on Monday, the day Benedict XVI made his historic abdication announcement, having arrived from a wedding in Malta. He actually planned to attend that morning's consistory of cardinals, having no idea what was to come, but arrived late enough he didn't make it.

Obviously, he now wishes there had been an earlier flight.

Despite his age, McCarrick, the former archbishop of Washington, keeps up a hectic travel schedule and has a wide network of friends among senior churchmen on every continent, giving him a firsthand sense of the thinking in various corners of the world. Although he won't vote in this conclave, he took part in the election of Benedict XVI in 2005, giving him a unique perspective on the differences this time around. He'll also participate in the daily General Congregation meetings of cardinals before the conclave begins.

In terms of the politics of the American church, McCarrick is sometimes seen as a leader of the more liberal wing of the American bishops, though he generally likes to talk about the importance of the "center."

McCarrick sat down for an interview with NCR on Feb. 14 at the North American College, the residence for American seminarians on Rome, to discuss Benedict's resignation and the dynamics of the looming papal election. The following is a transcript, edited for style.

Now that we're three days after the shock, what's your reaction to Benedict's decision?

I have a great double feeling for the Holy Father. No. 1, though I don't know him as well as I did his predecessor, if you know him at all you can see his struggle of wanting to do the right thing. He loves the church and is very anxious to do what the Lord would want him to do. There's obviously a feeling of deep humility that he's no longer able to do this.

At the same time, there's also great courage. He must have thought that this is not going to be easy, but this is what God wants me to do. That's also part of the deep humility of the man, because he's thinking, "It doesn't matter what I think. It's what's best for the church." He's a servant of the church in every way. We all could do things differently, but he's a very good man. He decided in his heart that this is the right thing to do, I'm sure after much prayer -- more prayers than I could ever make. He's just an extraordinary man.

Yesterday, as I saw him at the beginning of the celebration, he looked very old. For the first time, for me, he seemed that way. I'm only three years younger than he is, and I've always admired him, wondering if I could do what he does. My heart broke for him, because as a pope you've got to be somebody special, and it's obviously incredibly hard to do at that age. We've already had the witness of strength in sickness of his predecessor, so he didn't have to reproduce that.

Some have suggested that having a former pope still alive may risk dividing the church. You have the experience of resigning as archbishop of Washington and giving way to someone else. Do you share that concern?

No, not at all. In my case, I did what one should do, which is I disappeared for a couple of years until everybody knew who their archbishop was. Now I can take a Mass from time to time, but I was out of sight for the first two years. I'm sure this man will do even more than that, because he'll get older and weaker.

What about the criticism that he shouldn't stay in the Vatican for fear of casting a shadow over the new pope?

At first I thought it's not good for him to be in Rome. Now I think it's for the best, because it prevents anyone who doesn't like the new man from saying, "I'll go up to Regensburg [Germany] and talk to [Benedict]." Now you can't do that. You can't get to him unless he wants to be gotten to. I suspect he'll do a lot of writing. He's such a brilliant theologian he could write for the next hundred years and never exhaust his interests.

Assuming that's right, do you think it would be better for his writing not to be published until after he's dead?

I don't see that. He'll write as a theologian. That's what he did with that fantastic trilogy about the life of Christ. He said, "I'm not writing this as pope, I'm writing this as a Catholic theologian." People have had some concerns about one or two positions he took, and with all deep respect, he said he's not writing as the Holy Father. As a theologian, he can put things any way he wants. He's not imposing it on the church. Anyway, this man is too humble to do that.

Let's talk about what comes next. You participated in the conclave of 2005. Aside from the obvious, what's different this time around?

Benedict was someone who would basically follow the line of John Paul II, perhaps a bit more conservative on a number of things. He's probably a better theologian than John Paul II, though not a better philosopher. John Paul II was a philosopher and a poet; this man is a theologian and a teacher. You would often read the encyclicals of John Paul II and think, "I've got to read that again." The encyclicals of Benedict are very clear; they're really teaching documents. We've had that kind of a Holy Father for eight years. For almost 27 years before that, we had another kind of Holy Father. They taught the same things, they believed the same things, they loved in the same way, but they were different people. The ones who would have surrounded John Paul II might not have been the same ones who surrounded Benedict XVI because of his personality, his own vision.

That really is the big difference. Aside from that, we have some new cardinals, including some from the Third World, though some of us would have liked to see more. Still, it's the same church.

Is there any difference because it's not happening after the pope died?

I personally don't think that's going to be the major difference. It's the same sede vacante.

You remember the atmosphere of 2005 -- the 5 million people in Rome, the round-the-clock tributes in the global media, this tsunami of appreciation for John Paul II. The overwhelming impression was that this papacy was a massive success, which perhaps made it hard to take stock of the papacy's shortcomings. Is it easier this time to arrive at a more balanced assessment?

That definitely could be. In 2005, we were lost in the grief of the death of a great man. Now, we feel sad in the departure of a very good man, but it's not the same.

What effect will that have? I don't think it will be immediate, but it may have an effect on what the new pope can do. He's now freer than Ratzinger was. He's freer to do things that are new, he's freer to move -- more to the right, maybe, though I would say hopefully more to the center. Presumably it won't be to the left. He's freer to take a new direction, though of course not to change the theology of the church.

In terms of interior things, he could take a new approach to church discipline and the areas of his teaching. He may be more Gaudium et Spes, for instance, than Lumen Gentium. Benedict would have been more Lumen Gentium.

Externally, he needs to deal with the Islamic world. He needs to deal with Israel and what that means for the church. He needs to deal with the Third World. One of the things Benedict said in the early days [of his papacy] was that he chose the name Benedict because he was the patron of Europe, and he felt he needed to help rebuild the church in Europe. He's tried to do that, and probably the success or failure will be revealed years from now. You can't make snap judgments on these overwhelming historical movements. I think there are many in the Third World, however, who would like the new Holy Father to be very conscious of them. I think that's especially true, maybe, in Latin America.

Is the church ready for a pope from outside the West?

I've spent a lot of my life with Hispanics and in Latin America. As a young priest, I was in Latin America even before I began working in the United States. I really do love that part of the world, and I see it as a life spring for the church. I worry about it, because in many of the countries of Latin America, we're losing people. I think it would be so great for the focus to be on areas like Latin America. If we could have a Latin American [pope], that would be great too.

I asked if the church is ready for a non-Western pope. Is the College of Cardinals ready?

That's a different question. Not being a voting member this time, I can't answer that. I don't know. There will be conversations that will go on. I may be part of some of them, God only knows. I'll be going to the General Congregations, and it will be interesting to hear what they're saying. Were they ready for a Latin American last time? Well, apparently not.

You're talking about Cardinal Jorge Mario Bergoglio of Argentina, (who was widely reported to have finished second to Benedict in 2005)?

I can't talk to that, as you know. But I can say that from the conversations beforehand, which we can speak about, it was certainly plausible that we could have a non-European. When you just look at the statistics, two-thirds of the church is outside the West. That's a movement we must become aware of, whether we pay attention to it at the highest level of electing a pope or whether the pope who's elected pays attention to it by making sure his cardinals and his congregations have many people from those areas. That may be another way to do it. However it's done, it has to happen.

In 2005, there was some criticism about Cardinal Bernard Law playing a public role in the transition because it resurrected memories of the sexual abuse crisis. This time, some have voiced similar complaints about Cardinal Roger Mahony. How do you respond?

In the case of Cardinal Mahony, he's been an extraordinary leader for the church in our country in so many ways -- for the rights of immigrants, for justice and peace, and on other fronts, whatever one might say about his failures. I'm sure he felt he was handling things in the right way at the time, but now in retrospect it seems inadequate. This is a very fine man, and I don't think we have to be embarrassed by any of our fellows.

As a matter of protocol, aren't cardinals expected to take part in these events unless serious health problems prevent them? In other words, Mahony isn't injecting himself artificially?

That's exactly right. He would have to eject himself!

Overall, how do you feel heading into this transition?