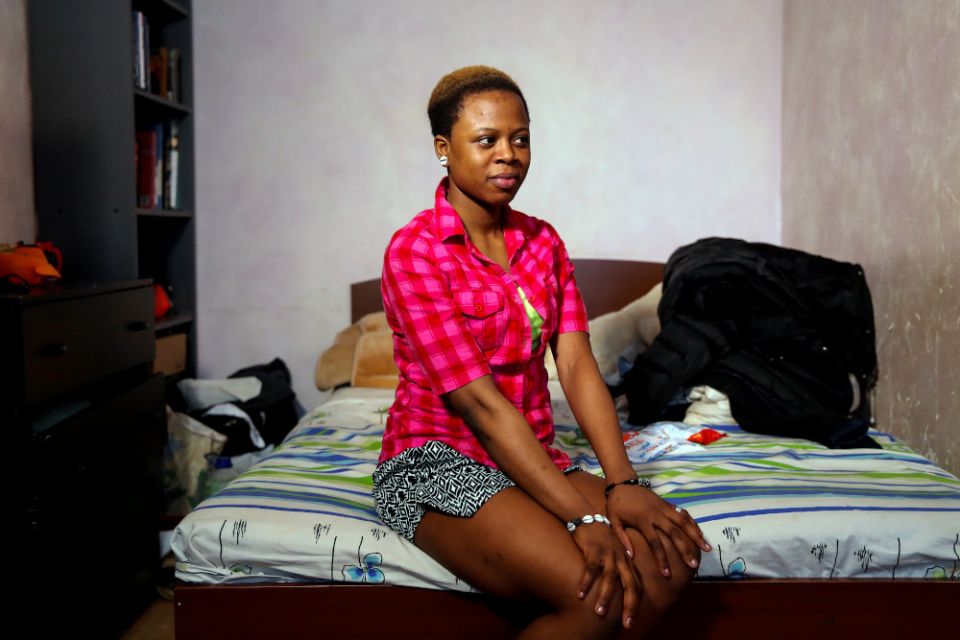 Blessing Obuson, 19, from Nigeria, rescued from human traffickers, poses for a portrait in a shelter on the outskirts of Moscow in this Feb. 21, 2019, file photo. (CNS/Reuters/Maxim Shemetov)

Vatican City — Male-female relationships based on "discrimination and submission" lead to the exploitation and humiliation of thousands of women and girls each year, Pope Francis said.

"Human trafficking, through domestic or sexual exploitation, violently relegates women and girls to their supposed role of subordination in the provision of domestic or sexual services and to their role as providers of care and dispensers of pleasure, which proposes yet again a model of relationships marked by the power of the male gender over the female," Francis said in a video message.

Marking the Feb. 8 International Day of Prayer and Awareness Against Human Trafficking and the feast of St. Josephine Bakhita, a former slave, Francis insisted, "The violence suffered by every woman and every girl is an open wound on the body of Christ, on the body of all humanity; it is a deep wound that affects every one of us, too."

"The thousands of women and girls who are trafficked every year denounce the dramatic consequences of relational models based on discrimination and submission," the pope said, "and it is not an exaggeration — there are thousands of them!"

Praising the women and women religious around the world dedicated to fighting human trafficking, coerced prostitution, forced marriage and slave labor, Francis said men must get involved as well, "opposing with all our might every form of exploitation in human trafficking."

Celebrating a Mass for St. Bakhita's feast day at the Domus Australia in Rome, Sydney Archbishop Anthony Fisher said, "We like to think of slavery as something from ancient Egypt or Rome, or something it took a civil war to stop in America around the time of Josephine's birth. But no, 'this is happening in our own cities today,' the pope reminds us. He asks as to pray and work where we can to prevent the exploitation of people, especially women and girls."

"The thousands of women and girls who are trafficked every year denounce the dramatic consequences of relational models based on discrimination and submission."

The archbishop noted how international organizations estimate "over 40 million people, mostly women and children, are trafficked around the world today, controlled, treated as property, exploited sexually or for their organs or labor, pressed into service as beggars, drug mules, even combatants."

The problem is not limited to a few countries or regions of the world, he said, noting there are thousands of victims in Italy and in Australia.

But, he said, "I'm proud to say that the Archdiocese of Sydney has led the way in Australia in slavery-proofing its supply lines, educating our people and the public about the issue, lobbying government for greater protections, and providing assistance to survivors."

Pope calls for 'globalization of charity' to protect migrants