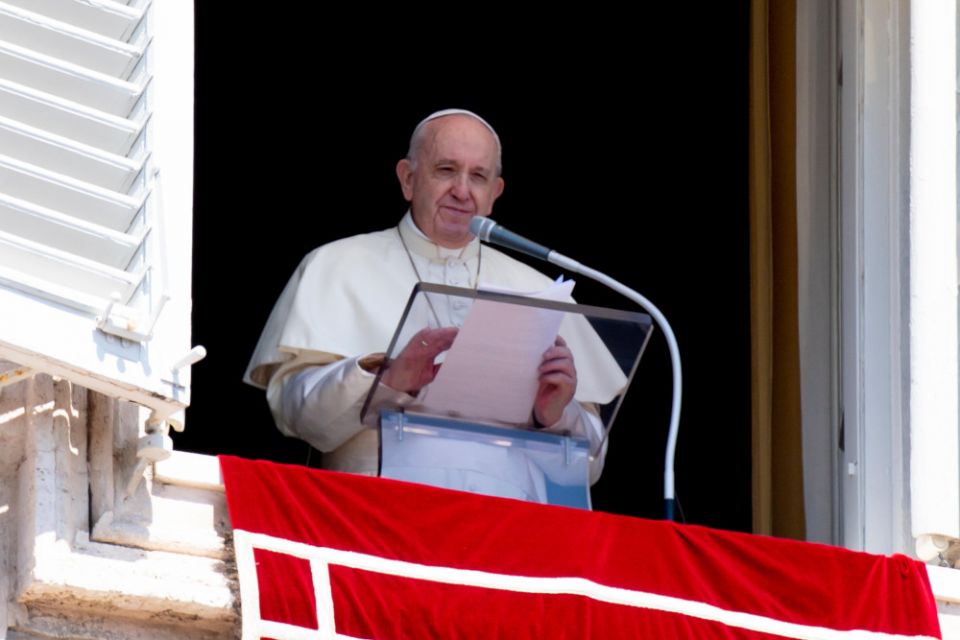 Pope Francis leads the Angelus from the window of his studio overlooking St. Peter's Square at the Vatican Aug. 23, 2020. The pope prayed for people persecuted for their faith, remembered the victims of the 2010 San Fernando massacre in Mexico and prayed for the victims of COVID-19. (CNS/Vatican Media)

Vatican City — Situations of persecution, of mourning and of violence were on Pope Francis' mind Aug. 23 as he recited the Angelus prayer with visitors in St. Peter's Square.

First, the pope told the crowd that Aug. 22 was the U.N.'s International Day Commemorating the Victims of Acts of Violence Based on Religion or Belief.

"Let us pray for these, our brothers and sisters, and let us also sustain with our prayer and solidarity those — and there are many — who today are persecuted because of their faith and religion," the pope said. "There are many."

To mark the day, the pope had tweeted: "God has no need to be defended by anyone and does not want his name to be used to terrorize people. We call upon everyone to stop using religions to incite hatred, violence, extremism and blind fanaticism."

Francis also told the crowd that Aug. 24 would be the 10th anniversary of "the massacre of 72 migrants in San Fernando, in Tamaulipas, Mexico."

"They were people from various countries who were looking for a better life," the pope said of the 58 men and 14 women who were kidnapped and then shot in the back of the head by members of a Mexican drug cartel.

"I express my solidarity with the families of the victims who today are still asking for truth and justice regarding the events," the pope said. "The Lord will hold us to account for all of the migrants who have fallen on their journey of hope. They were victims of the throwaway culture."

Francis also greeted a group of families who had come to the Vatican from Carobbio degli Angeli, in the hard-hit Italian province of Bergamo, on a pilgrimage in memory of the victims of the coronavirus.

He told the crowd that "this morning I heard the testimony of a family who lost their grandparents — on the same day — without being about to say goodbye to them."

"So much suffering, so many people who lost their lives, victims of this disease; and so many volunteers, doctors, nurses, sisters, priests, who also lost their lives," he said. "Let us remember the families who have suffered because of this."

The pope also remembered the people of central Italy still trying to rebuild after massive earthquakes in 2016, and he asked for prayers for the people of Cabo Delgado province in northern Mozambique, "who are suffering because of international terrorism."

Francis had called Bishop Luiz Lisboa of Pemba, the capital of Cabo Delgado, Aug. 19 after the port town of Mocimboa da Praia had been taken by men claiming to be affiliated with the Islamic State group.