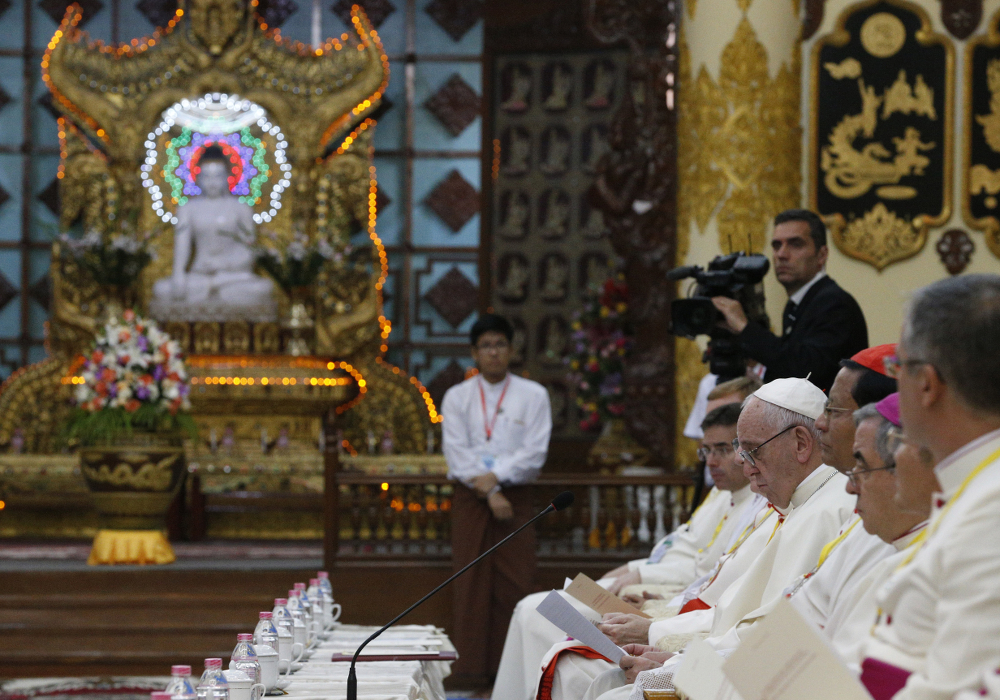 Pope Francis called on the leaders of Myanmar's Buddhist clergy Nov. 29 to help the Buddhist majority nation, which is facing international outcry over its persecution of 600,000 minority Rohingya Muslims, "surmount all forms of misunderstanding, intolerance, prejudice and hatred."

While the pontiff did not refer specifically to the Rohingya in an address to the 47-member State Sangha Maha Nayaka Committee, which regulates the practices of the country's some 47 million Theravada Buddhists, he said religious leaders have a responsibility to promote fair treatment of the different groups in a society.

"It is the particular responsibility of civil and religious leaders to ensure that every voice be heard, so that the challenges and needs ... may be clearly understood and confronted in a spirit of fairness and mutual solidarity," the pope told the clerics gathered at Yangon's Kaba Aye Pagoda, a golden-spired structure that hosted the last international pan-Buddhist Council from 1954-56.

Referencing a peace conference begun by the Myanmar government last year to try and negotiate differences among the country's 18 recognized ethnic groups, from which the Rohingya are excluded, Francis asked that the ongoing event "continue to promote greater participation by all who live in Myanmar."

"Authentic justice and lasting peace can only be achieved when they are guaranteed for all," he told the clerics.

Francis' address to the Buddhists came on the third of his four days in Myanmar, which he is visiting Nov. 27-30 before continuing on to Bangladesh, where the U.N. says some 600,000 Rohingya have gone to flee violence from Myanmar's military.

Although human rights advocates want the pontiff to confront Myanmar's authorities over their treatment of the Rohingya, local church leaders have advised him to refrain while in the country from specifically mentioning the Rohingya by name, for fear of reprisals from Myanmar's military.

In an address Nov. 28 to de facto Prime Minister Aung San Suu Kyi, a Nobel Peace Prize laureate now facing intense international criticism, the pope did not explicitly mention the Rohingya but said that Myanmar's future must include "respect for each ethnic group and its identity," specifying: "none excluded."

During a press conference later Nov. 29, Vatican spokesman Greg Burke said the fact that Francis has not specifically mentioned the Rohingya while in Myanmar "doesn't take away from anything the pope has said in the past, or from anything he says in private."

As per Vatican custom regarding the pope's private meetings with political leaders, the spokesman declined to comment on any conversations Francis may have had with Suu Kyi about the Rohingya during their private meeting Nov. 28. But he added: "Having said that, if you've watched and followed the pope, he's a very free man."

Burke said Francis is trying to build bridges in Myanmar, and mentioned that the Vatican and Myanmar only established full diplomatic relations last May. He said discussions in new relationships "often take place behind closed doors."

Asked what the Vatican has to say to groups such as Amnesty International that expressed disappointment at Francis' decision not to raise the Rohingya publicly with Suu Kyi in their public meeting, Burke replied: "Everyone's entitled to their own opinion here."

"Nobody ever said Vatican diplomacy's infallible," said the spokesman. "I know and I'm very happy that people think the pope is all powerful, but he's not."

The president of the State Sangha Maha Nayaka Committee also did not refer to the Rohingya in his speech welcoming Francis to the Kaba Aye Pagoda Nov. 29, but he decried terrorism and violence committed in the name of religion.

"We, the leaders of the religions of the world, must be resolved in constructing a harmonious human society, following the teachings of our respective religions," said Bhaddanta Kumarabhivamsa, according to a Vatican translation of his Burmese text.

"We all must denounce any form of expression that incites hate, false propaganda, conflict and war ... and we condemn with firmness those that support such activities," said the Buddhist monk.

Francis and Kumarabhivamsa spoke to each other in the pagoda surrounded by their respective colleagues; the pope with his entourage of bishops and priests and the Buddhist with his other committee members. The groups sat across from one another in a long room marked by an ornate blue rug and a statue of the Buddha with colored, flashing lights behind its head.

Before entering the pagoda, the pope took off his shoes in the Buddhist custom but was allowed to wear black socks instead of going barefoot like the Buddhist clergy.

In his address, Francis compared one of the Buddha's teachings to St. Francis of Assisi's peace prayer.

"If we are to be united, as is our purpose, we need to surmount all forms of misunderstanding, intolerance, prejudice and hatred," said the pontiff.

"Similar sentiments are voiced in a prayer attributed to Saint Francis," the pope continued. "'Lord, make me an instrument of your peace. Where there is hatred, let me sow love. Where there is injury, let me bring pardon."

About 89 percent of Myanmar's population of some 53 million identifies as Buddhist. Kumarabhivamsa said Nov. 29 that his group oversees about 500,000 monks and some 75,000 nuns.

Myanmar began a process of democratic reforms in 2015 after a half-century of military rule. But the armed forces still have substantial power in the nation, including control of 25 percent of the seats in Parliament and of the ministries of defense, home affairs and border affairs. 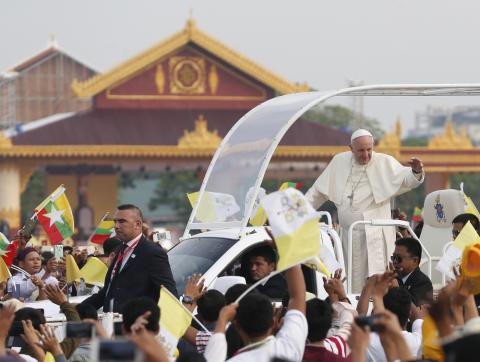 The military considers the Rohingya, who primarily live in the country's western state of Rakhine, as illegal migrants even though they have lived in Myanmar for generations.

Francis met with Myanmar's top military leader, Senior General Min Aung Hlaing, shortly after arriving in the country Nov. 27. Vatican spokesman Burke said Francis and Hlaing "spoke of the great responsibility of the country's authorities in this moment of transition."

Giving a homily to tens of thousands across a wide-open field at the Kyaikkasan Ground, a former British polo and sporting area in the heart of Yangon, the pope praised the work of the local church in helping people in Myanmar "regardless of religion or ethnic background."

Francis reflected on a passage from Luke's Gospel, when Jesus tells his followers not to prepare a defense if they face persecution, but to rely on God's grace.

"I know that many in Myanmar bear the wounds of violence, wounds both visible and invisible," said Francis. "The temptation is to respond to these injuries with a worldly wisdom that ... is deeply flawed."

"We think that healing can come from anger and revenge," he continued. "Yet the way of revenge is not the way of Jesus. Jesus’ way is radically different. When hatred and rejection led him to his passion and death, he responded with forgiveness and compassion."

Thousands of Myanmar's Catholics traveled hundred of miles to be in Yangon, some by foot, for the first public papal Mass in their country's history. Many had camped out overnight on the overgrown, swampy field to reserve a spot for the celebration.

James Theophilus, from Yangon, was in the crowd with several of his family members. He said they arrived together at 2 a.m. to claim a place.

"We hunger to see the pope," said Theophilus, mentioning that none of his ancestors had ever seen a pope in person. "Today, we are going to see the pope! It is very, very wonderful. He's coming to visit all the poor peoples, all the Burmese citizens of all nationalities."

A woman who identified herself in broken English as "Pious Mary" was with her daughter and two grandchildren. In response to questions, she just kept saying "very happy, very happy."

Francis is to continue his visit in Myanmar in the morning of Nov. 30 before continuing on to Bangladesh later that day, where he will visit memorials to the country's independence and meet with President Abdul Hamid.

The pope is to return to Rome Dec. 2.