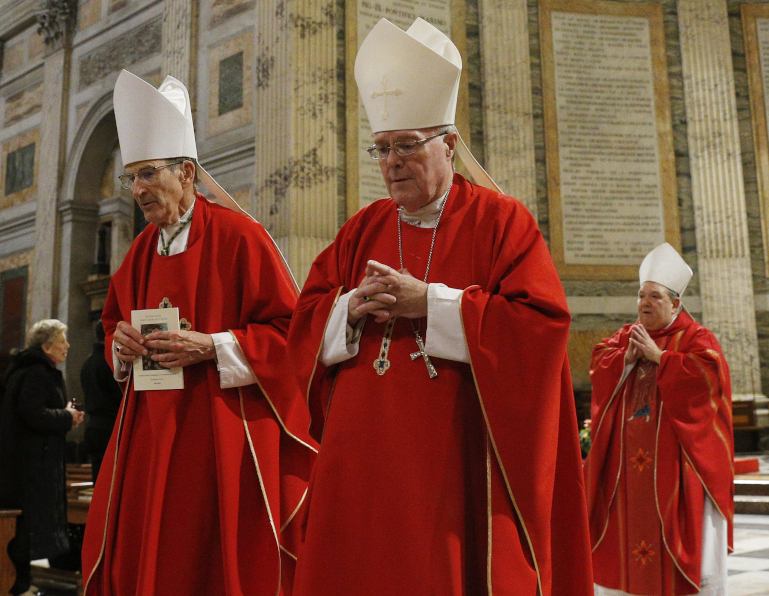 Bishop John LeVoir of New Ulm, Minnesota, Bishop Michael Hoeppner of Crookston, Minnesota, and Archbishop Bernard Hebda of St. Paul-Minneapolis, leave in procession after celebrating Mass with U.S. bishops at the Basilica of St. Paul Outside the Walls in Rome Jan. 15, 2020. (CNS/Paul Haring)

Pope Francis on April 13 accepted the resignation of Crookston, Minnesota, Bishop Michael Hoeppner, who had been under investigation for more than a year over allegations of mishandling cases of clergy sexual abuse.

Although the announcement in the Vatican's daily bulletin did not say whether the move came as a result of the inquiry, a statement from the Crookston Diocese a few hours later said Francis had "asked for" Hoeppner's resignation.

Hoeppner, aged 71, had been subject to an investigation, initially conducted by St. Paul-Minneapolis Archbishop Bernard Hebda, since September 2019.

After sending an initial report to Rome that fall, Hebda was later asked by the Vatican in February 2020 to investigate further.

The investigation of Hoeppner had followed a new procedure for bishops accused of abuse or cover-up. Outlined in the May 2019 'motu proprio' Vos Estis Lux Mundi ("You Are The Light Of The World"), the procedure involves the empowering of archbishops to conduct investigations of prelates accused in their local regions.

Although some survivor advocates and canon lawyers have praised the new procedures, others have questioned a lack of transparency over which prelates are being investigated and the result of those inquiries.

The statement from the Crookston Diocese said the investigation into Hoeppner's behavior had been "extensive" and regarded "reports that he had at times failed to observe applicable norms when presented with allegations of sexual abuse involving clergy."

Hoeppner is the first U.S. bishop to effectively lose his job because of the Vos estis procedures.

Francis has not named a new bishop for Crookston, instead asking retired Des Moines, Iowa, Bishop Richard Pates to temporarily oversee the diocese.

Editor's note: This story was updated after initial publication to include a statement from the Diocese of Crookston, Minnesota.