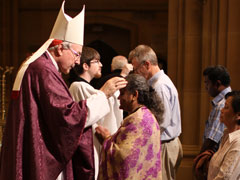 SYDNEY, Australia -- The energies of Catholic Australians in recent years have been absorbed by contradictory approaches to being faithful. The first is the church’s institutional integrity (requirements of obedience, orthodoxy and conformity); the second is its moral integrity (what should it be doing, for whom and how).

The church’s top leadership and its ordinary members have been concerned about these issues in almost inverse proportion. Pope Benedict XVI, like the late John Paul II before him, has been at pains to strengthen the church against the influences of secularism by insisting on stricter discipline in its ranks and a greater acceptance of official teachings on the part of the faithful.

Many Australian clergy and laypeople, on the other hand, regard the declining number of regular churchgoers, the shrinking number of priests and religious, and the scandal of clerical sexual abuse as compelling reasons to move away from old ways of being church and pursue fundamental reform.

The result of these contradictory approaches is often conflict.

The most recent casualty in Australia has been a popular 67-year-old bishop from a rural diocese in the state of Queensland. Earlier this month, Bishop William Morris announced he was retiring, after 18 years in the job, because of Vatican pressure. (See related story.)

Morris endured Vatican scrutiny of allegations that he encouraged debate about ending mandatory celibacy for priests, ordaining women, and recognizing Anglican and Lutheran ministerial orders and -- possibly -- that he permitted communal confession (the Third Rite of Reconciliation) to be conducted in his parishes in ways that contravened Canon Law.

Morris says he was “deliberately misinterpreted.” He also says that he stands by his conviction that the church needs to be open to discussion about the challenges it faces but instead is being suffocated by “creeping authoritarianism.”

The treatment of Morris has generated expressions of outrage and despair from many Catholics across the country. “I am deeply saddened by this event, and the lack of transparency in the process,” was one of the more restrained comments from a member of the laity.

The chairman of the National Council of Priests, the largest representative body of priests in Australia, also expressed his embarrassment at the “shabby treatment” meted out to Morris and raised concerns about “an element within the church whose restorationist ideology wants to repress freedom of expression ... and deny the legitimate magisterial authority of the local bishop within the church.”

This case, however, is only the tip of a much bigger iceberg.

Following the first visit to Australia by John Paul back in the late 1980s, the historian Fr. Edmund Campion wrote that the “vast crowds who turned out to celebrate Mass with the pope in every capital city demonstrated, if nothing else, their comfortableness at calling themselves Catholics [and their] presence was a rebuttal of those who had been foretelling the imminent breakup of the Australian church.”

Then, as now, the outward signs of success were unmistakable. Catholics had become the largest single religious group in Australia by the mid-1980s (at about 26 percent of the population); the church employed more people than any other enterprise outside of government; it was the major private-sector provider of education, health and welfare services; and, of course, Sydney was chosen to host World Youth Day in 2008.

Even so, behind the façade a different story has been unfolding.

Its most worrying element has been the steady desertion of the pews. In 1976, over half of all professed Catholics in Australia attended Mass regularly: By 2006 (the last time a count was taken) that figure was below 14 percent and still falling.

Even this figure, however, is somewhat misleading because over one-third of regular Mass attendees are now first-generation migrants, principally from Vietnam, the Philippines and India. There is every probability that their children, raised in different circumstances, will quickly discontinue the practice like most everyone else.

“We’re dying really in some ways,” lamented a priest from Western Australia in the study I recently completed into Australian parish clergy. “There’s a lot of disconnection between people’s lives and the church today which was not like that before, not strong anyway. Here in my local community I’m almost irrelevant -- that’s how I feel. It’s just as though me and the church are irrelevant.”

Many of the laity who do attend Mass regularly have effectively reduced if not completely cut their sense of attachment to the wider institutional church. “There are people in this parish who are not going to put money on the plate because they say they don’t trust the institution, but they tell me if I need money for a good cause they’ll give it,” one Sydney priest said. “There’s a strong sense of, you know, we’re getting on with being church in our own little way in [this parish].”

Among regular churchgoers, however, there is also a small number of extremely conservative lay Catholics -- derisively known as the “temple police” -- who have taken it upon themselves to patrol the boundaries of orthodoxy by spying on priests and bishops and reporting what they consider to be questionable behavior to Rome.

Such reports are believed to have played a major role in shaping perceptions about the church in this country among senior Vatican officials, including the current pope.

Signs of the times

In early 1998, for example, then Cardinal Joseph Ratzinger alleged in L’Osservatore Romano -- the Vatican’s official newspaper -- that Australia was a country where there were “abuses in the lay faithful’s participation in the sacred ministry of the ordained.” What these “abuses” were and how they differed from the situation in countries such as France, Britain or Italy -- which were arguably much further down the road to secularism than Australia at the time -- were never explained.

Later that same year, after many Australian bishops at the Synod for Oceania in Rome had spoken about the need for church reform that responded to the signs of the times, several members of the Australian hierarchy were presented with, and required to sign, an assessment of their church drawn up largely by curial officials, including Ratzinger.

This assessment, known as the Statement of Conclusions, asserted that a “crisis of faith” existed in Australia that stemmed largely from the “tolerance characteristic of Australian society.” This led, the document alleged, to religious indifference, distorted understandings of the faith, and a “blurring of the lines” between the roles of clergy and laity.

In essence, the correctives set out in the statement -- which were subsequently ignored by many more pragmatic bishops -- have become markers of “authentic” Catholicism for many conservatives, including those Morris claims were behind the case made against him.

Nothing that the Vatican has required, compliant bishops have delivered, or conservative laypeople have applauded, however, has reversed the dramatic decline in the ranks of religious orders or diocesan priests. In 2010 there was only half the number of religious priests, brothers and sisters in Australia than there were in the mid-1970s.

Officially, the number of diocesan priests has gone from 2,100 priests 50 years ago to 1,900 today -- a decline of 10 percent. Over the same period, the nominal Catholic population has gone from 2.6 million to over 5.1 million -- an increase of almost 100 percent.

These figures, however, can be misleading: They include retired priests, active and retired bishops, and priests not in parish ministry. The actual number of active priests in parish ministry in Australia in 2011 is a little over 1,500. At least 300 of these are foreign priests invited into dioceses on short-term work visas to compensate for the lack of new vocations.

Morale among many Australian priests is very low. During my study, a 77-year-old priest said that his impression was that even Catholics took their priests for granted and that, these days, “if the value of Catholic ministry was measured in monetary terms it would, of all professions, have the least value.”

Much more disconcerting was the comment from a 47-year-old priest who wrote that the only thing he had ever wanted to be was a priest but that “given the state of the church today I look forward to the night when I go to sleep and just don’t wake up.”

Almost one half of the 550 priests who responded to my survey said that their workload was excessive and the same proportion agreed that they had too little time to pursue purely personal interests. Generally, an older generation of priests seemed resigned to these facts of life but several in their 50s definitely were not.

“Our middle age is being eaten up and burnt out by so much more [work] whereas [priests] over 65 probably when they were going through middle age had three priests [in a parish], their workload and the stress on them [were less], they could carry on until 75 and later,” said one.

“I think a lot of our [generation] are basically saying physically and emotionally, ‘I can’t.’ We talk about it all the time. Even as we approach 50 and 60 we’re slowing down. I think that’s our experience that we are actually wearing out earlier and so we are not going to have the stamina to work past 70.”

The loneliness of priestly life was also a reality that many respondents mentioned in completely unsolicited remarks. It seemed to be a major factor in shaping attitudes toward mandatory celibacy (70 percent of respondents thought it should be optional).

But the most surprising responses from priests were on matters concerning the current management of the church in Australia. Only slightly more than a third of respondents thought the bishops were doing a good job of this, almost two-thirds thought the bishops were too conservative, and respondents were equally divided as to whether they had, or had not, been nurtured by their bishop.

Almost three-quarters of priests felt that the Vatican too often failed to understand the nature of the church in Australia and majorities felt that Vatican exercised far too much control of the church here and issued directives that restricted the role it could play.

Many priests complained of a growing conservatism and centralism in the church. As one 52-year-old priest put it: “I am angered and frustrated by a shortsighted, narrow-minded hierarchy that fears consultation and collaboration in the making of decisions.”

Since this study was completed, at least a dozen Australian priests have indicated that they will refuse to use the new English translation of the Roman Missal and hundreds more were reported in February to be angry about the lack of consultation in its preparation -- which was influenced by Sydney’s archbishop, Cardinal George Pell -- and the outdated nature of the result.

Episcopal ranks also seem suddenly in disarray. Australia has 33 dioceses and eparchies and about 42 active bishops and auxiliary bishops. In the last three months:

In the larger picture, the Australian Catholic experience is not unique. But it speaks yet again to the failure of an old model of church and the stunting of the birth of the new.

[Chris McGillion is a former religious affairs editor for The Sydney Morning Herald who now teaches at Charles Sturt University. He is the author (with John O’Carroll) of Our Fathers: What Australian Catholic priests really think about their lives and their church (John Garratt Publishing, 2011).]

Francis has opened the Vatican's top leadership to women. Are lay cardinals next?

Vatican in 'pain' at Nicaragua expulsion of papal nuncio