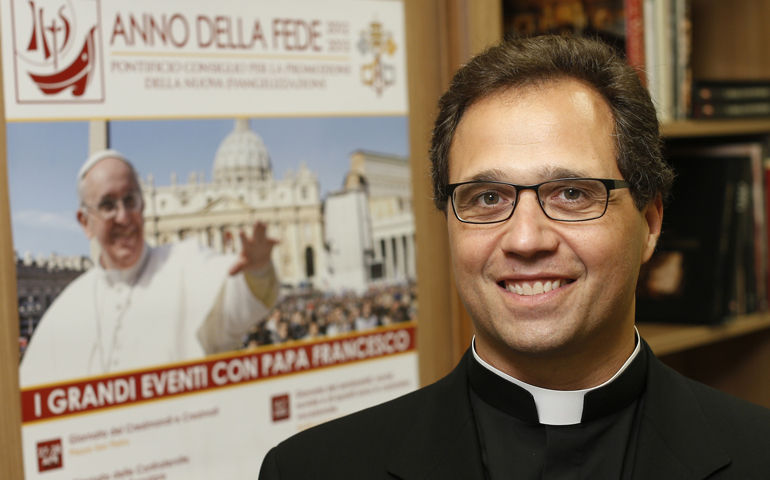 Fr. Geno Sylva of the Pontifical Council for Promoting the New Evangelization at the Vatican on Oct. 22 (CNS/Paul Haring)

Mentoring inner-city youths is hardly the most obvious way to prepare for working at the Vatican, but Fr. Geno Sylva says the lessons he learned in a low-income New Jersey community have served him abundantly well in his current job as an official at the Pontifical Council for Promoting New Evangelization.

Ordained in 1993, the New Jersey native has long had a passion for spreading the Gospel. He worked as a teacher, chaplain and president at DePaul Catholic High School in the diocese of Paterson, as well as a mentor at Young Prophets, a program for inner-city teenagers there.

"Those wonderful years in Paterson taught me that the first step in the new evangelization is listening, truly listening to the other and not simply waiting for a break to respond," he said. "It is in listening that trust and credibility are gained, both of which are necessary before one can propose anything to another person."

The new evangelization is a project, launched by Blessed John Paul II and continued by his successors, that seeks to revive the faith in traditionally Christian but increasingly secular countries, particularly in the West.

Sylva spent three years studying theology in Rome, returning to his diocese in 2008, and two years later established St. Paul Inside the Walls, a center whose focus he describes as engaging people in a dialogue with the Gospel and calling them to be evangelizers themselves.

Among the center's outreach activities, one that Sylva remembers as especially inspirational combined reading Scripture with a 12-step program in the tradition of Alcoholics Anonymous.

"Each Sunday morning, people from near and far, those who were either battling with an addiction or journeying with someone confronting an addiction, gathered together to reflect upon one of the 12 steps through the lens of sacred Scripture," he said. "The depth of reflection and discussion, the complete personal transparency and the desire to be healed in Christ made each of these gatherings a true time of blessing in my own life and journey of faith."

During a pilgrimage to Rome in 2011, Sylva met the president of the council for the new evangelization, Archbishop Rino Fisichella, who hired him the next year as the office's designated English-speaking official.

The council has overseen many of the activities of the 2012-13 Year of Faith, and is increasingly focusing its work on catechesis, which Sylva says goes "hand in hand" with the new evangelization.

His office also serves pilgrims to Rome by making arrangements for them to go to confession and receive catechesis in their own languages, participate in eucharistic adoration, and visit the tomb of St. Peter.

Sylva was specifically responsible for organizing the "Evangelium Vitae" ("Gospel of Life") celebration in June, which celebrated pro-life efforts around the world, and a Year of Faith event for seminarians and novices the following month.

The Year of Faith will conclude Nov. 24, but the council's work will continue, he says, noting that Pope Francis has emphasized the importance of the missionary service that is the office's focus.

"The idea of going out of our churches, out of ourselves, and engaging with other people" is central to the pope's message and to the new evangelization, Sylva said, summing up their common task as that of "inviting people to come to know Christ."