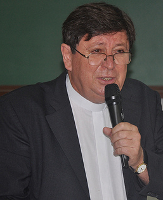 Pope Benedict XVI’s choice as the new Vatican overseer for religious orders, 63-year-old Brazilian Archbishop João Bráz de Aviz, is seen as a personable if little-known figure with a reputation as a moderate-to-conservative, who apparently comes to his new job without a strong personal agenda regarding religious life.

If so, that alone would make Bráz de Aviz a contrast to the man he replaces, 76-year-old Slovenian Cardinal Franc Rodé, a Lazarist who spent much of his five-year tenure as Prefect of the Vatican’s Congregation for Institutes of Consecrated Life and Societies of Apostolic Life battling what he described as a “crisis” in religious life following the Second Vatican Council (1962-65).

Among other things, under Rodé’s leadership, the office -- popularly known as the “Congregation for Religious” -- launched an on-going, and controversial, Apostolic Visitation of women religious in the United States.

Bráz de Aviz is not a member of a religious order and sources in Brazil say he’s not written or spoken widely about issues in religious life. He’s seen as closer to some of the new lay movements in the church, especially the Focolare, an Italian group emphasizing ecumenical and inter-religious unity.

Most Vatican-watchers believe Bráz de Aviz was picked largely on the strength of his nationality and general reputation for reliability, as opposed to any specific interest in religious life. With the recent retirement of Cardinal Cláudio Hummes as Prefect of the Congregation for Clergy, there was no Brazilian in any senior Vatican post, despite the fact that Brazil is by population the largest Catholic country in the world.

A dogmatic theologian who studied in Rome at both the Gregorian and Lateran universities, church-watchers in Brazil have long regarded Bráz de Aviz as a rising star.

First named an auxiliary bishop of Vitória in 1994, at the age of 47, Bráz de Aviz was tapped as bishop of Ponta Grossa in 1998, archbishop of Maringá in 2002, and finally archbishop of Brasilia, the national capital, just two years later in 2004. He was widely expected to be named a cardinal in the recent consistory, and his appointment to the new Vatican post makes the red hat virtually automatic the next time around.

Despite that insider appeal, Bráz de Aviz has maintained a low public profile, even in his home country. Yesterday the Brazilian newspaper O Estado de S.Paulo described him as “discrete and not well-known” and the Brazilian media generally buried news of his appointment on the inside pages.

Church sources in Brazil generally describe Bráz de Aviz as a centrist, not part of the progressive liberation theology current in Brazilian Catholicism, but also distant from the church’s more traditionalist wing.

One Brazilian journalist who covers the church told NCR that during his time in Brasilia, Bráz de Aviz was seen by supporters of the older Latin Mass as an “enemy.”

Despite Benedict’s 2007 motu proprio authorizing wider celebration of the old Mass, the journalist said, Bráz de Aviz did not grant permission “easily,” and in general “the traditionalists didn’t seem to have an easy life while he was in charge.”

On the other hand, Bráz de Aviz has also kept his distance from the progressives.

In December 2008, he reportedly threatened to boycott a gathering of Franciscans if Leonardo Boff -- a renowned liberation theologian who left the Franciscan order and the priesthood in 1992 after running afoul of the Vatican -- was on the same program. Church sources said Bráz de Aviz’s problem wasn’t so much Boff’s defense of the poor, but rather his advocacy of a “church from below” in contrast to the hierarchy.

In Focolare circles, Bráz de Aviz is seen as a friend. He’s celebrated Masses in honor of Chiara Lubich -- the Italian founder of Focolare who died in 2008 -- and in 2007 he opened a beatification process for Ginetta Calliari, a close friend of Lubich who helped bring the Focolare movement to Brazil in the 1960s.

“Focolare”, which in Italian means “hearth” or “fireside,” was created by Lubich after the Second World War to promote unity and universal brotherhood. It currently operates in 182 nations with some 100,000 members; in the United States they’re known for dialogue with the American Society of Muslims, founded by the late Warith Deen Mohammed.
t
Bráz de Aviz’s ties to the Focolare may help him settle in Rome, since many focolarini, as its members are known, serve in Vatican offices.

Given his background, most observers expect Bráz de Aviz to rely in the early stages on the congregation’s number two official, American Archbishop Joseph Tobin, a former superior of the Redemptorist order. If so, that may be good news for American sisters alarmed about the possible fallout of the Vatican investigation, since Tobin has repeatedly expressed support for women religious in the States.

Bráz de Aviz becomes the fourth Brazilian to head a Vatican department, after the late Cardinal Angelo Rossi, who led the Congregation for the Evangelization of Peoples from 1970 to 1984 and later the Apostolic Patrimony of the Holy See, and who at one stage was the dean of the College of Cardinals; the late Cardinal Lucas Moreira Neves, who headed the Congregation for Bishops from 1998 to 2000; and Hummes.

If things hold to form, Bráz de Aviz could eventually emerge as a papal contender. Each of his Brazilian predecessors as a Vatican official was widely touted as a papabile in his day, though none, of course, were ever elected.