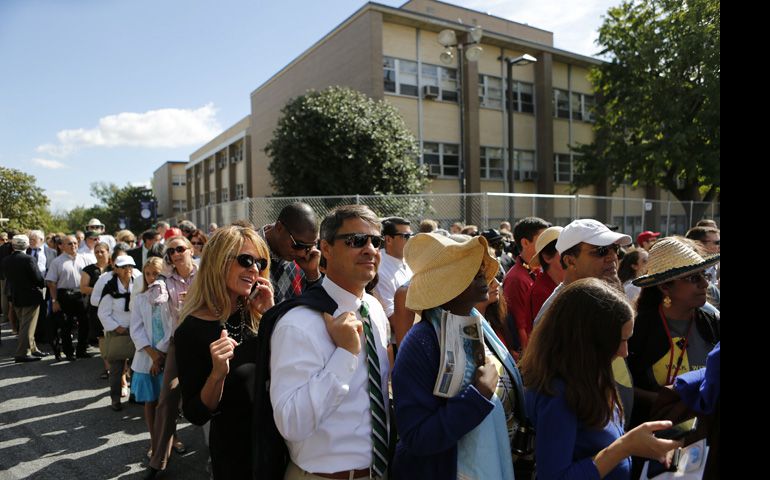 People wait to go through security to attend the canonization Mass for Blessed Junipero Serra outside the Basilica of the National Shrine of the Immaculate Conception in Washington Sept. 23. (CNS photo/Bob Roller)
This article appears in the Francis in the United States feature series. View the full series.

Washington — Pope Francis has canonized the controversial Franciscan Fr. Junipero Serra, claiming that the 18th-century missionary to what would become the western United States protected and defended Native Americans from mistreatment and abuse.

In the first canonization Mass ever held on U.S. soil, attended by tens of thousands outside the Basilica of the National Shrine of the Immaculate Conception, the pontiff said that Serra followed Jesus' call to go forth and proclaim the Gospel.

Francis said the Spanish native, who left his homeland to found Christian missions along what is now the California coast, "was the embodiment of 'a Church which goes forth.' "

"He was excited about blazing trails, going forth to meet many people, learning and valuing their particular customs and ways of life," said the pope. "He learned how to bring to birth and nurture God’s life in the faces of everyone he met; he made them his brothers and sisters."

"Junípero sought to defend the dignity of the native community, to protect it from those who had mistreated and abused it," said Francis. "Mistreatment and wrongs that today still trouble us, especially because of the hurt which they cause in the lives of many people."

Francis' comments regarding Serra's relationship with Native Americans, made during the homily at Wednesday's Mass, may attract criticism. While supporters of the canonization say the Franciscan was a product of his time, critics say the mission system he founded mistreated Natives and even forced them to covert to Catholicism.

NCR has extensive resources about who Serra was and the controversy around his canonization.

The pope referred to Serra himself only briefly in the homily, during the last moments of his remarks. Francis mostly reflected on the Gospel reading of the day, in which Jesus commissions his disciples to go to all nations to teach the faith.

Wednesday's Mass was the pope's third public event during his six-day visit to the U.S., which will see him travel on to New York and Philadelphia before returning to Rome on Sunday.

Earlier in the day, Francis met with President Barack Obama at the White House and with the nation's Catholic bishops at Washington's Cathedral of St. Matthew.

Crowds at the Basilica of the National Shrine for the canonization Mass were dense, with people packed in along barrier fences to try and be close to the pope-mobile as Francis arrived on The Catholic University of America campus. Some had been there since very early in the morning to try and claim good spots.

While the Mass itself was held outside the Basilica, the pope also visited the inside of the structure beforehand and blessed those in the building -- many of whom were local priests, seminarians, and religious.

Serra was decreed a saint at the very beginning of Wednesday's Mass.

According to the normal rite, Washington Cardinal Donald Wuerl simply asked Francis to make the declaration of sainthood. The pope then made the decree in Latin, after hearing a brief summary of the Franciscan's life and worthiness from the postulator of his sainthood cause.

At the beginning of his homily, Francis asked: "How do we make the joy of the Gospel increase and take deeper root in our lives?"

The pontiff said that Jesus tells us we can find joy in three places: In mission, going out to people in different nations; in "following a command," proclaiming the good news; and in "answering a call" to "go forth and anoint."

"Jesus did not provide a short list of who is, or is not, worthy of receiving his message, his presence," said Francis. "Instead, he always embraced life as he saw it."

"Far from expecting a pretty life, smartly-dressed and neatly groomed, he embraced life as he found it," said the pope. "It made no difference whether it was dirty, unkempt, broken."

"Jesus said: Go out and tell the good news to everyone," said the pontiff. "Go out and in my name embrace life as it is, and not as you think it should be. Go out to the highways and byways, go out to tell the good news fearlessly, without prejudice, without superiority, without condescension, to all those who have lost the joy of living."

"Mission is never the fruit of a perfectly planned program or a well-organized manual," said Francis. "Mission is always the fruit of a life which knows what it is to be found and healed, encountered and forgiven. Mission is born of a constant experience of God’s merciful anointing."

A number of languages were used during Wednesday's Mass, including Chochenyo, a language of Native peoples in what is now northern California.

Sick must be cared for in body and soul, pope says

Denver's Chaput to be part of Legionaries' probe