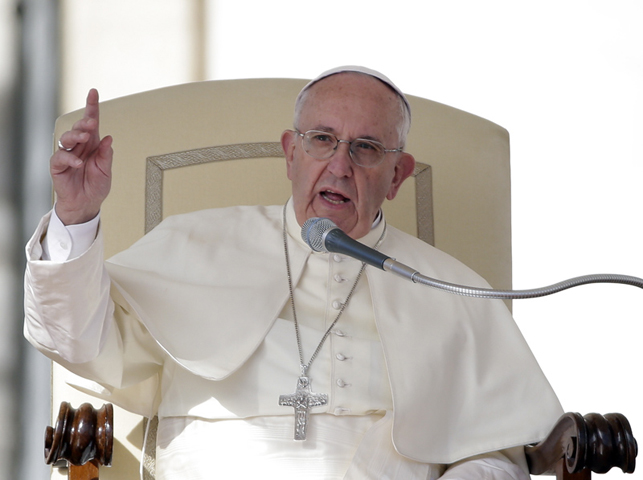 Pope Francis gestures as he speaks during his weekly general audience in St. Peter’s Square at the Vatican on Feb. 24, 2016. (Reuters/Max Rossi)

The headline was eye-catching, and most likely that was the goal:

"Pope fires Vatican ambassador to U.S. over Kim Davis," shouted the story this week in the left-leaning Daily Kos.

Pretty amazing, if it were true.

In reality, Pope Francis' current ambassador, or nuncio, to the U.S., Archbishop Carlo Maria Vigano, was still in his job, though that could change at any minute.

Church sources say that the pontiff has chosen French-born Archbishop Christophe Pierre, now the Vatican's representative to Mexico, to be his next envoy to the U.S., a move that has generated widespread speculation about what Pierre will do when he arrives, in part because the man he is replacing has been so controversial.

Vigano gained notoriety last September when it emerged that he set up a secret meeting between Francis and Kim Davis, the Kentucky clerk who briefly went to jail for refusing to sign marriage certificates for gay couples.

The encounter took place at the Vatican Embassy in Washington when the pontiff was visiting the nation's capital. When news leaked a few days after Francis returned to Rome, it caused an uproar because it made it seem the pope had quietly been giving support to an icon of the very culture wars that he had spent his visit preaching against.

That also cast a shadow over what was otherwise an enormously successful and historic trip, Francis' first-ever to the U.S.

It turned out, however, that the pope had been as blindsided as everyone else. He didn't know who Davis was, church officials said, nor did he understand the implications of meeting her, and he was reportedly furious that his chief diplomatic representative in the U.S. had arranged the decidedly undiplomatic meeting.

The Italian-born Vigano was immediately called back to Rome and called on the carpet, and it was considered providential that Vigano reached the mandatory retirement age of 75 in January and could be eased out gracefully, a move that may either happen very soon or not until after Easter.

Church sources said Pierre's nomination was awaiting State Department approval, standard protocol in these diplomatic appointments, and the only holdup was likely to be the timing of the announcement.

Whether accepting Vigano's retirement papers counts as a dismissal is in the eye of the beholder: Yes, the archbishop had to submit his retirement request when he turned 75 as a matter of course. But the pope was also free to keep him on.

Even before the Davis affair, Rome didn't show great confidence in Vigano, so no one thought he would hang around long after his birthday, and last November in an address to the U.S. bishops Vigano acknowledged that it would be his last meeting with them.

Yet Francis also wanted to make sure he found the right replacement. Initial reports indicated that Archbishop Celestino Migliore, a career Vatican diplomat who knew the American scene after spending years as the Holy See's representative to the United Nations in New York, was a leading contender.

But church observers believe that Migliore, currently the Vatican representative to Poland, needs to stay in Warsaw, especially with World Youth Day and a papal visit to that country set for late July.

Moreover, Pierre, 70, speaks fluent English and "is widely recognized as one of the Holy See's most accomplished diplomats," as Gerard O'Connell, the Vatican correspondent for America magazine, wrote.

He also seems to have the kind of profile that Francis likes: Before Mexico he was the Vatican representative to Haiti and Uganda, and he served in other missions in the developing world and is familiar with issues of poverty and migration that are also priorities for this pope.

That led some reports to speculate that Pierre, if named, would make immigration reform a focus of his efforts in Washington, while gay Catholics wondered if Pierre would bring a different approach to LGBT issues.

To be sure, a new nuncio is not likely to be giving Kim Davis a call, nor is he likely to appear at the March for Marriage, a nascent annual protest against same-sex marriage in Washington that Vigano attended for two consecutive years. That the Vatican's diplomatic representative to the country would take part in what was widely seen as a domestic political demonstration in opposition to the White House always struck church insiders as odd.

The next nuncio would also have a chance to reset relations between the Holy See and the Obama administration, which could very well be succeeded by a Clinton or a Trump administration, either of which would present real challenges to the Vatican.

But the reality is that the nuncio's most important role is not so much diplomacy or politics as it is helping vet candidates for the pope to name as bishops.

Appointing bishops -- and archbishops and cardinals -- with a similar outlook is the chief way that a pope can ensure that his legacy will outlast his pontificate. Without like-minded cardinals voting for the next pope in a conclave, and without like-minded bishops in dioceses around the world, Francis' best-laid plans can disappear with him.

A case in point is the U.S. hierarchy, where the pope faces serious opposition to his reformist agenda. If he were to disappear from the scene anytime soon, it's uncertain whether his papacy would have any traction.

Up to now, Francis has taken a personal interest in a few major U.S. appointments, like that of Archbishop Blase Cupich in Chicago, and has sometimes gone around Vigano and outside the usual channels to make those selections.

But he can't do that forever -- there are thousands of other dioceses around the world to look after -- and numerous vacant American posts have gone unfilled in recent months as the pope waited to get a new man in Washington to help find the right candidates.

"If the pope wants a bishops' conference that will support him, he needs his new nuncio to name about twenty to thirty bishops who are with the program," church analyst Michael Sean Winters wrote in the National Catholic Reporter.

Winters noted that Pierre's experience in Mexico may serve him well if indeed he is appointed to Washington.

That's because some leaders of the Mexican hierarchy, like many in the U.S. church, are also not great fans of Francis. For example, the newspaper of the Archdiocese of Mexico City, headed by Cardinal Norberto Rivera Carrera, this month ran a pointed editorial pushing back strongly against Francis' critiques of the Mexican bishops when the pope spoke to them during his visit there last month.

Rivera, who is viewed as close to the country's rich and powerful, is believed to have signed off on the editorial, which was also seen as a dig at Pierre because it said Francis was either ignorant of the situation in Mexico or got "bad advice" -- advice that would have come from his nuncio.

If Pierre goes to Washington, wrote Sandro Magister, the veteran Italian Vatican-watcher -- and Francis critic -- the nuncio is likely to face a similar situation. But, Magister added, "the remodeling of the American hierarchy could see a significant acceleration."