At NY Mass, Francis describes how to be a saint in the city 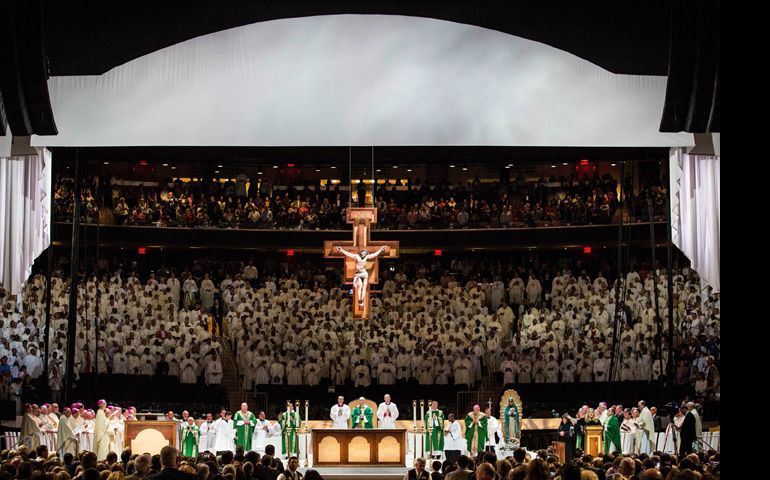 New York — Celebrating Mass with some 25,000 people in Madison Square Garden Friday, Pope Francis reflected on the difficulty of living life as a Christian in a big city  -- where people can feel alone amidst the crowd, or overwhelmed by the pace of life.

In a homily in one of the world's most popular concert venues, the pope echoed a theme some might know from the popular Springsteen song: "It's so hard to be a saint in the city."

But the pontiff told an overwhelming crowd during his second public Mass in the U.S. that Christians have a special hope. Even through the hubbub, they know that Jesus "still walks our streets."

"Living in a big city is not always easy," Francis said in his homily, focused on Jesus' famous teaching in Matthew's Gospel in which he exhorted his followers to turn the other cheek and love their enemies.

"Yet big cities are a reminder of the hidden riches present in our world: in the diversity of its cultures, traditions and historical experiences," said the pope. "Big cities bring together all the different ways which we human beings have discovered to express the meaning of life, wherever we may be."

Despite the positives of city living, however, Francis said there is a danger. The sometimes-overwhelming mix of people and events allows certain faces to pass by unnoticed, he said.

Identifying those faces, the pontiff said: "They are the foreigners, the children who go without schooling, those deprived of medical insurance, the homeless, the forgotten elderly."

"These people stand at the edges of our great avenues, in our streets, in deafening anonymity," he said. "They become part of an urban landscape which is more and more taken for granted, in our eyes, and especially in our hearts."

Christians living in cities, Francis said, are called to "go out to others and share the good news that God, our Father, walks at our side."

"He frees us from anonymity, from a life of emptiness and selfishness, and brings us to the school of encounter," said the pope. "He removes us from the fray of competition and self-absorption, and he opens before us the path of peace."

Such peace, the pontiff said, "is born of accepting others" and "fills our hearts whenever we look upon those in need as our brothers and sisters."

Following Communion, barely a sentence into Cardinal Timothy Dolan's remarks thanking Francis for his visit, Mass attendees interrupted with a sustained standing ovation that left Francis fighting back a smile.

Afterward, the pope made what has become his typical request: "Don't forget to pray for me."

Friday's Mass was Francis' last public event in New York, where he has been visiting since Thursday afternoon. The pope is on a six-day, three-city tour of the U.S. He first visited Washington and travels to Philadelphia Saturday morning.

The celebration at Madison Square Garden was held under heavy security in New York. On the way to the venue, Francis took a ride in the pope-mobile through Central Park. Dozens of plainclothes officers ran alongside the vehicle, and it drove in the center of the street, many feet away from the gathered crowds.

Vatican | At NY Mass, Francis describes how to be a saint in the city

Vatican's Lombardi: In US, Francis wants to address global questions

Francis to critics: Do I need to say the Creed?