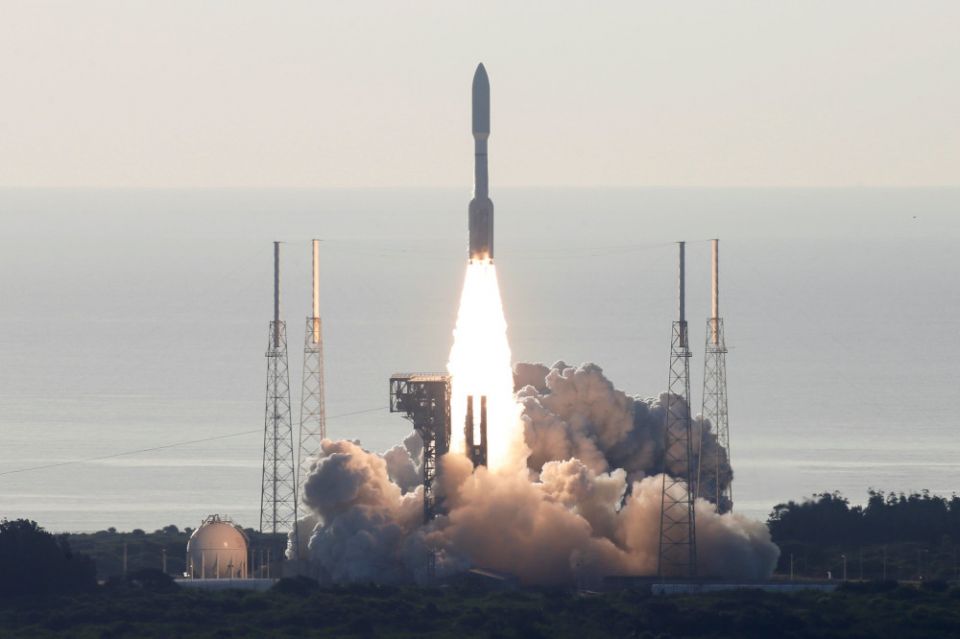 Vatican City — As Perseverance, the latest probe on Mars, gears up to send to Earth high-definition images, video and audio of its surroundings, one papal astronomer said he hoped the fresh new discoveries will inspire future explorers.

With advanced degrees in physics, philosophy and theology, Jesuit Br. Robert Macke said, "What really inspired me to come into this field was growing up with the results that were coming out of the spacecraft missions, like Voyager, and all the photographs that nobody had ever seen before" of Saturn and its moons and other objects in the solar system.

Born in Fort Worth, Texas, in 1974, Macke told Catholic News Service he only "dabbled a little" in enjoying science fiction, influenced by his father's interest in the genre, and he credits it with inspiring him to think of new ideas.

But it was the reality of scientific discoveries that made him say, "Wow, these are real places that you can really explore and photograph and study," he said Feb. 19 in a call from the Vatican Observatory in Castel Gandolfo near Rome.

"Seeing the results and the images that come out of missions like Perseverance, I hope these will be an inspiration to the next generation of young scientists," he said.

The popular imagination has come a long way since early speculations about little green men and artificial canals of some ancient civilization once populating the red planet.

When the Mariner 4 probe flew by Mars in 1965 and took the very first pictures of another planet ever seen, "it saw a dry, desolate planet," said the Jesuit brother, who is the curator of the Vatican's meteorite collection.

"It became apparent that what we had imagined through our telescope was not the actual case, that Mars is a very different place, a very dead world," he said.

But that did not deter science from going back again and again for decades, certain that Mars holds a lot of clues for the quest for extraterrestrial life and planetary formation. 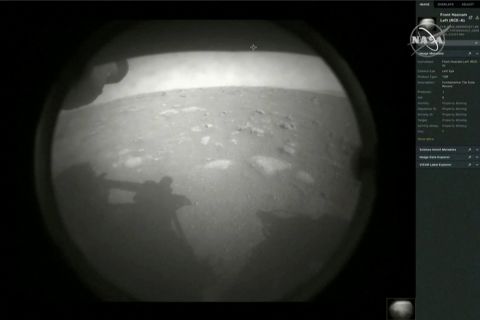 The first images arrive moments after NASA's "Perseverance" Mars rover spacecraft successfully touched down on Mars, in this image from video at NASA's Jet Propulsion Laboratory in Pasadena, Calif., Feb. 18, 2021. As "Perseverance" prepares to send high-definition images of its surroundings, one papal astronomer said he hoped these fresh new discoveries will inspire the next generation. (CNS/NASA TV via Reuters)

The many different Mars missions have led scientists to look for other clues and signs, like possible evidence of minute microbial life — past or present — or something completely unlike anything found on Earth.

"The atmosphere doesn't have signs of the source of chemistry that would reflect current living organisms doing their ordinary biology," he said, so "maybe in the past, maybe back when Mars was wetter, when the atmosphere was thicker, perhaps back then maybe it might have supported life. And so that's what we want to look for."

The Perseverance will be able to drill under the Martian surface and store sample cores in tubes for possible future study. It also has ground penetrating radar that should help understand the structure underneath the surface, and it will drive along what had been a lake full of water, because, Macke said, "when we're looking for life, you follow the water."

"The more we know about Mars, the more we can direct our focus in the search for life," he said, adding that "Mars is the nearest and easiest and biggest laboratory for us to search for life."

Macke said the Vatican meteorite collection has about half a dozen specimens from Mars, including samples from the important Chassigny meteorite, which fell in France in 1815, and "Nakhla," which fell in Egypt in 1911, and was held by Popes Benedict XVI and Francis.

Macke said he and a researcher in Houston are using data from Martian meteorites and comparing it with data from different Mars orbiters "to better understand and characterize the surface and immediate subsurface of Mars."

The race to Mars has intensified with two other successful missions reaching their destinations in February: an orbiting craft sent by the United Arab Emirates, and a probe set to land by China.

While those missions may have geopolitical overtones for some, for scientists — the more the better, he said.

"In the sciences, and planetary science in particular, we are an international community, and we have quite a tradition of collaborating amongst ourselves quite a bit," he said.

"As far as I know, the data coming from these missions will be shared with scientists around the world," the Jesuit said. "That is part of this scientific community is not one that is really bound by geopolitical borders."

"That's one of the marvelous things about science, it's really an international collaboration of the whole world. You know, the world benefits when we learn more through our science," he said.

Bishops and astronauts gather in Washington to remember Apollo 8