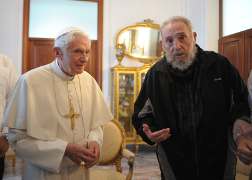 HAVANA (CNS) -- The Cuba that Pope Benedict XVI visited March 26-28 is a country where the Catholic Church enjoys significantly more freedom and official recognition than it did when Blessed John Paul II made the first papal visit to the island in 1998.

Since that time, the communist regime has made Christmas a national holiday, and it now allows Communist Party members to identify themselves as practicing Catholics. In preparation for this year's 400th anniversary of the Virgin of Charity of El Cobre, the venerated statue was allowed to circulate on a pilgrimage throughout the country, an event that President Raul Castro said "brought our people together, believers and nonbelievers."

Such progress in religious freedom is what Cuban church leaders and Pope Benedict himself have said they hope to build on in the aftermath his visit. But in other dimensions of human rights, the reform record of the Cuban regime has been less encouraging.

"People should be able to express their opinions without fear and without punishment," said Msgr. Jose Felix Perez Riera, assistant secretary of the Cuban bishops' conference. "When somebody thinks or expresses a different idea, they accuse him of being paid by the United States, of being a traitor. Little (reforms), such as permitting someone to buy a cellular phone -- those don't seem significant to me."

Pope Benedict, in his public statements during and just prior to his Cuba visit, affirmed the value of freedom.

"The church is always on the side of freedom: freedom of conscience, freedom of religion," he told reporters March 23, in response to a question about Cuba.

"God not only respects human freedom: He almost seems to require it," the pope said in his homily during a Mass in Santiago de Cuba March 26.

But addressing those frustrated by the pace of change in Cuba after half a century of communism, the pope said that the "path of collaboration and constructive dialogue" between church and regime there is long and "demands patience."

Msgr. Perez said Pope Benedict was not saying that Cubans should remain passive in the face of oppression.

"I think that when the Holy Father asks patience it does not mean inactivity ... it does not mean crossing your arms and letting things happen without taking any responsibility," Msgr. Perez said. "Perhaps he is thinking of the gradualness (that is) normal to human and social processes."

Msgr. Perez is the pastor of Havana's Church of St. Rita of Cascia, where the Ladies in White -- "Damas de Blanco" -- attend Mass every Sunday, then march down the avenue in front, protesting human rights violations by the regime.

The Ladies in White are relatives of Cubans who were imprisoned in 2003 for advocating free elections and other political reforms. The prisoners were released in 2011 under a deal brokered by Havana Cardinal Jaime Ortega Alamino. Most of those former political prisoners went into exile abroad.

The Ladies have continued protesting on behalf of other prisoners of conscience who they say are still inside Cuban prisons. Members of the group are frequently arrested and released in less than 24 hours. They also have been attacked by what they say are government-controlled mobs.

For one of the Ladies, Alejandrina Garcia de la Rivas, 46, the pope's counsel is comprehensible yet hard to accept.

"As Catholics we understand the word patience ... anger, impatience, desperation are sins," she said. "But we are afraid. We have to do something."

Garcia voiced gratitude for the welcome that Msgr. Perez offers the Ladies at his church and for the support they have received from other members of the Cuban hierarchy.

Bishop Manuel de Cespedes Garcia-Menocal of Matanzas was still a parish priest when he ministered to Garcia's husband in prison and has remained a family friend, she said. She noted that Archbishop Dionisio Garcia Ibanez of Santiago de Cuba forcefully defended the Ladies from the threat of mob violence earlier this year, and Garcia said she remains thankful for Cardinal Ortega's work to obtain the release of the group that included her husband.

Garcia also said she appreciates the principles behind the bishops' nonconfrontational strategy of dialogue with the regime.

"I think (the bishops) have the right idea, of reconciling all Cubans, of helping all Cubans without exception, even those who oppress us," she said. "But they are also afraid; they are afraid because they, too, suffer, they are threatened."

What the Ladies want, Garcia said, is for the Cuban bishops to insist that their dialogue with the regime also include representatives of the political opposition. In Garcia's view, such representation would mean real progress toward lasting political reform.

Prior to Pope Benedict's arrival in Cuba, the Ladies publicly appealed to him for a brief meeting during his visit. By the eve of his last day in the country, when Garcia and another member of the group, Laura Maria Labrada Pollan, met for an interview with Catholic News Service, it seemed all but certain that the pope would not grant their request. Nonetheless, the two were eagerly waiting to join other Ladies in White the next day at a Mass celebrated by the pope in Havana's Revolution Square.

They did not get the chance. The two were arrested before 6 a.m. March 28, Garcia said, then taken to a military prison outside of Havana, where they were photographed, fingerprinted and weighed. The police returned them to Labrada's home at 3 p.m., four hours after the end of the pope's Mass.

Four things to look for in Francis' reform of curia