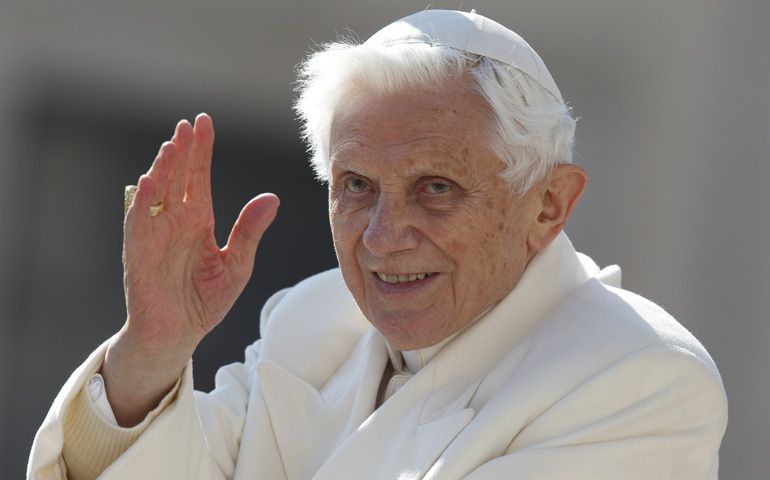 Pope Benedict XVI waves as he leaves his final general audience Wednesday in St. Peter's Square at the Vatican. (CNS/Paul Haring)
This article appears in the Conclave 2013 feature series. View the full series.

Rome — The last public day on the job for a pontiff known for his formal demeanor was surprisingly intimate.

In the moments before Pope Benedict XVI arrived in St. Peter's Square in his white popemobile, the roads circling the square's iconic colonnades were largely quiet.

After three days of cold Roman rain, the estimated 150,000 people here were bathed in sunshine. Along temporary fences set up to direct the crowd, police guards and volunteers stood at intervals of about 20 feet.

On the southern side of the square, across the street from the entrances to the offices of the Congregation for the Doctrine of the Faith, guards were directing people almost one by one, pointing where to go for the best view of the retiring pontiff.

As the pope arrived at the foot of St. Peter's Basilica, walking slowly but without assistance to a throne at the center of a white dais for the last public remarks he is expected to make before he officially renounces the papacy at 8 p.m. Rome time Thursday, he took a decidedly personal tone.

Benedict began his remarks surrounded by about 60 cardinals and dozens of bishops dressed in formal red- and purple-lined cassocks, along with a number of other dignitaries.

The papacy, Benedict told them, had been a "great weight" on his shoulders.

It "was a part of the journey of the church that has had moments of joy and light, but also moments that were not easy."

Benedict spoke in Italian, the Vatican later translated his speech into English.

"I felt like St. Peter and the apostles in the boat on the Sea of ​​Galilee," Benedict went on.

"The Lord has given us many days of sunshine and a light breeze, the days when the fishing is plentiful. But there were also times when the water was rough ... and the Lord seemed to be sleeping."

Benedict said he received letters of thanks at the end of his pontificate from many heads of state and other dignitaries, but also from many ordinary people.

"These people do not write me as they would a prince or a great person one does not know," the pope said. "They write as brothers and sisters, sons and daughters, with the sense of very affectionate family ties.

"Here you can touch what the church is -- not an organization, not a religious or humanitarian association, but a living body, a community of brothers and sisters in the Body of Jesus Christ, who unites us all."

His decision to resign, Benedict said, came because in recent months he had "felt that my strength had decreased."

"I asked God earnestly in prayer to enlighten me with his light to make me take the right decision not for my sake, but for the good of the church," the pope continued.

"I have taken this step in full awareness of its severity and also newness, but with a deep peace of mind. Loving the church also means having the courage to make tough choices, suffering, having always before you the good of the church and not yourself."

Ending the address, Benedict said he wanted to "thank each and every one of you for your respect and understanding with which you have welcomed this important decision."

"I ask you ... above all to pray for the cardinals, who are called to a task so important. And for the new Successor of Peter, may the Lord accompany him with the light and the power of his Spirit."

"In our heart, in the heart of each of you, there is always the joyous certainty that the Lord is near, he does not abandon us, is near us and surrounds us with his love," Benedict concluded. "Thank you."

Benedict's remarks were followed by shorter summaries by the pope in five other languages, and then by statements read by representatives in seven others, including Polish, Arabic and Romanian.

Before the pope's address, several people in the crowd said they came to give thanks to the pope and to show the church's global unity.

"I'm most interested in what the pope will say about the future of the church, what indications he'll give for it," said one Indian seminarian, part of a group of three at the audience who study at the Pontifical Urbaniana University.

"The important thing is that people all around the world have come to say thanks to this pope for his eight years of service and to pray for him," said Augustine Gaut, an Indonesian in the audience who was accompanied by three Indonesian sisters of the Compassionate Sisters, Servants of Mary, an order based in Rome.

"There is not as much support for the church now as there was in the past," said Yen Van Nguyen, a Jesuit scholastic studying at the Pontifical Gregorian University who was standing with two French-speaking sisters of a Pauline order based in Vietnam.

"By being here, we are a symbol of unity for the church," Nguyen said. "We believe the Holy Spirit will lift the church with the truth, and with the next pope."

Following his address Wednesday, Benedict is expected to have limited public contact before he officially ends his papacy Thursday evening. At a press conference Tuesday, Jesuit Fr. Federico Lombardi, the Vatican spokesman, said Benedict is spending his last days as pope in prayer.

The church's cardinals, who are responsible for electing the next pope, are expected to begin meeting Monday. It is unknown when they will begin the conclave, the secret meeting in which they will cast ballots for the new pontiff.

While all 117 cardinals under the age of 80 are allowed by church law to take part, two eligible cardinals have announced they are not coming -- one because of health issues, another following accusations he had inappropriate sexual contact with priests and a seminarian.

Among the crowds leaving the square following the pope's final blessing were about a dozen bishops and cardinals, easily identified by their respective purple and red zucchettos as the dodged left and right, navigating the guards surrounding the circular streets around the colonnade.

Cardinal Polycarp Pengo of Dar-es-Salaam, Tanzania, was one of those leaving the scene. Talking as he walked through a fence out onto a Roman street, Pengo said the pope's remarks "were beautiful."

Dalai Lama says Pope Francis is unwilling to meet: 'It could cause problems'