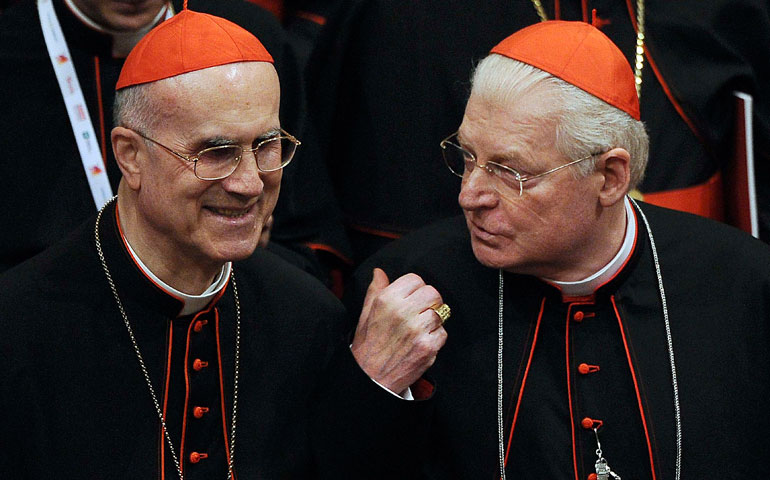 To understand the forces likely to influence the looming conclave to elect a successor to Pope Benedict XVI, let's begin with the obvious.

First, a conclave is not the Iowa caucuses. Either John Paul II or Benedict XVI appointed each of the 117 cardinals who will cast a ballot, including 11 Americans, so there will be little ideological clash. No matter what happens, the church almost certainly won't reverse its bans on abortion, gay marriage or women priests.

Papal transitions are more about changes in tone than substance. For instance, imagine two different answers from the new pope about gay marriage.

Answer one: "Assaults on the family are a moral cancer, and we must defend God's truth." Answer two: "Church teaching is well-known, but our desire is to reach out in a spirit of love." It's the same content, but the feel is vastly different.

The second point is that the conclave of 2013 is different from the last edition in 2005 in five key respects:

Taken together, these contrasts with 2005 suggest that the papal election of 2013 is more difficult to handicap from the outside, and on the inside it may be more complicated to cobble together a winning coalition.

At the moment, the dynamics appear to be shaping up as a contest among four principal camps. To be clear, these are not overt blocs with platforms and spokesmen, but more like instincts circulating among cardinals that clash with some visions of the future and overlap with others.

The first is what we might call the "governance camp," meaning cardinals who believe that the internal administration of the church, beginning with the Vatican itself, suffered during the Benedict years. In general they don't blame Benedict as much as the people around him, beginning with Bertone.

This camp first came into view in 2009, when a cause célèbre involving the lifting of the excommunication of a Holocaust-denying bishop suggested an inability by Bertone and his team to defuse bombs before they exploded. Now this lingering dissatisfaction has found a voice. On Feb. 12, just a day after Benedict's announcement, 79-year-old Cardinal Joachim Meisner of Cologne, Germany, revealed that he had appealed to Benedict in the name of a number of cardinals four years ago to dump Bertone.

"The Ratzingers are loyal," Meisner said in an interview with a German newspaper, "and that doesn't always make their lives easy."

This governance camp will be looking for a pope more inclined to take the reins into his own hands, or at least to be savvier about appointing aides with a capacity to make the trains run on time.

In the past, when cardinals would talk about "governance" it was often code for an Italian pope, on the assumption that Italians carry a special gene for ecclesiastical administration. The recent Vatileaks scandal, however, seemed to highlight the worst of petty Italian squabbles, and may have taken the edge off the preference for an Italian candidate.

Second, there's the "pastoral camp," meaning cardinals looking for a less ideologically defined pontiff, one with the capacity to heal internal rifts, such as the recent priests' rebellion in Austria, and to take a new look at thorny issues such as Communion for divorced and remarried Catholics.

One point of reference for this camp may be Cardinal Christoph Schönborn of Vienna, a Dominican and theological protégé of Benedict's who's kept lines of communication open with his dissident priests, and has hinted he'd be open to reconsidering mandatory celibacy.

Whenever you hear a cardinal over the coming days proclaim that the church needs a "pastoral" pope, as Italian Cardinal Giovanni Lajolo did Feb. 16, saying that's what the time demands rather than a Vatican bureaucrat, this is the sort of thing they often have in mind.

Schönborn is nobody's idea of a left-winger, but he's also no ideologue. Whether the cardinals are prepared to elect another German-speaking European, however, isn't clear.

Another force is the "Third World camp," meaning a bloc that believes it's time for the church to elect a pope who can put a face on the burgeoning Catholic footprint outside the West.

Cardinal Peter Turkson of Ghana, currently president of the Vatican's Pontifical Council for Justice and Peace, is one spokesman for this group.

"I think in a way the church is always and has forever been ready for a non-European pope," he told The Associated Press on Feb. 13. When the 64-year-old Ghanaian was asked if he might be that pope, Turkson said, "I've always answered, 'If it's the will of God.' "

It's not just the Third Worlders themselves beating the drum.

"When you just look at the statistics, two-thirds of the church is outside the West. That's a movement we must become aware of," Cardinal Theodore McCarrick of the United States said in a Feb. 14 interview with NCR. McCarrick is already over 80, and is thus ineligible to vote in the conclave, but will participate in the deliberations leading up to it.

On a related note, many cardinals identify the relationship with Islam as a critical priority for the next pope, and some believe a candidate with deep personal experience of living cheek by jowl with Muslims might fit the bill.

Finally, there's what might be defined as the "evangelical camp," meaning cardinals looking for intellectual continuity with the teaching of Benedict's papacy but perhaps a slightly more popular touch and a deeply missionary orientation.

Cardinal Angelo Scola of Milan, 71, is often seen as a leading figure in these circles, a specialist in moral anthropology who comes out of the same theological circles as Benedict, but who's spent more time in the pastoral trenches and who has a greater comfort level with the media and the public stage.

On Feb. 17, Scola led a group of bishops from the Italian region of Lombardy to see Benedict, the last group of bishops he'll meet making their regular "ad limina" visits to Rome. Benedict enjoined them to be "a light for all," a remark directed at all the bishops, but in the hothouse atmosphere of the pre-conclave period some also read it as a subtle nod to Scola personally.

To be clear, the borders among these camps are porous, and many cardinals would identify with more than one. Schönborn, for example, is well-regarded by many of the "evangelical" cardinals, who also think highly of some candidates from the developing world, such as Cardinal Robert Sarah of Guinea, who currently heads the Vatican's charitable department Cor Unum.

The need to build consensus may augur a search for a candidate who appeals to several of these groups.

Cardinal Leonardo Sandri, for instance, is a 69-year-old Argentine who's spent most of his life in Italy, so he brings the First World and Third World together. He was the substitute, or chief of staff, under John Paul II, so he has a proven capacity to govern. As a product of the Vatican's diplomatic corps, he's seen as a pragmatic moderate on most issues, appealing to the pastoral instinct.

Cardinal Albert Malcolm Ranjith Patabendige Don of Colombo, Sri Lanka, is a favorite among the most "Ratzingerian" cardinals for his insistence on liturgical propriety, and the 69-year-old would also make a compelling symbol of Catholicism's growth outside the West.

Whether Sandri or Rnajith emerge as serious contenders is anyone's guess, but they represent the cross-party appeal the situation may require.

As veteran Italian Vatican-watcher Andrea Tornielli has written, "This time around it could be truly complicated to get to the white smoke."

A version of this story appeared in the Mar 1-14, 2013 print issue under the headline: Picking the pope a contest among four camps.