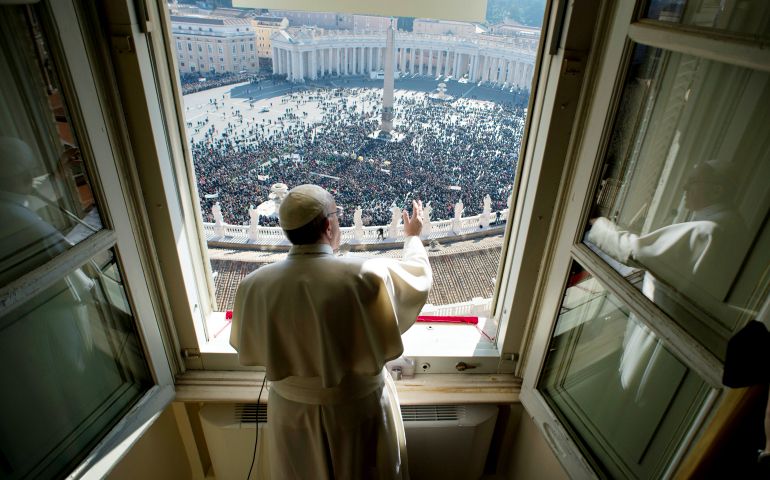 Pope Francis greets the crowd as he leads the Angelus from his studio overlooking St. Peter's Square at the Vatican Jan. 29. (CNS/L'Osservatore Romano, handout)

Rome — Pope Francis admitted to the leaders of the world's Catholic male religious orders in a meeting last fall that the Vatican is a corrupt place, but said he is at peace in his work reforming the church's command structures.

"There is corruption in the Vatican," the pontiff told members of the Union of Superiors General Nov. 26, according to a report of the meeting released for the first time Thursday by the Italian Jesuit magazine La Civilta Cattolica.

The pope made the admission after being asked by one of the religious leaders how he maintains serenity in his work.

"I do not take tranquilizers!" Francis joked, before adding: "The Italians offer good advice: to live in peace you need a healthy dose of not caring."

"I am at peace," said the pontiff, explaining that he has a small statue of a sleeping St. Joseph on his desk and that he places notes identifying problems he needs Joseph to help with under the statue.

"Now he is sleeping under a mattress of notes!" he joked again. "That is why I sleep well: it is a grace of God."

Francis was speaking in November to about 140 male superior generals, who were meeting in Rome for the 88th general assembly of their umbrella group. Thursday's report of the encounter was written by Jesuit Fr. Antonio Spadaro, the chief editor of Civilta Cattolica and a papal confidant.

Release of the report of the November meeting comes as the Jesuit magazine is celebrating is 4,000th issue since its founding in 1850, and as the outlet is beginning to publish editions in four additional languages: English, Spanish, French and Korean.

In Thursday's report, Spadaro says the meeting between the pope and the religious leaders lasted three full hours and was not broadcast originally because it "had to be free and fraternal, made up of unfiltered questions and answers."

Besides mentioning corruption in the Vatican, Francis also speaks at length about how he sees the work of the church, how religious leaders can prevent sexual abuse of minors, and what community life should look like.

The meeting began with a question about the reason why Francis chose that the next session of the Synod of Bishops, to take place in 2018, would focus on young people.

The pope explains that at the end of the 2015 Synod, all the participants were asked to make three suggestions for the next meeting. Those suggestions, he said, were also joined by suggestions from bishops' conferences, which were then discussed by the council of bishops that oversees the Synod.

Francis says he was part of that discussion. "I was present," states the pope. "I always go, but I do not speak. For me it is important to truly listen. It is important that I might listen, but let them do their work freely. In this way I understand how problems emerge, what the proposals are, and how to confront them."

The pope says he hopes the next Synod would focus most on helping young people discern God's will for their lives. He says the issue of discernment "is one of the greatest problems we have with priestly formation at the moment."

"In formation we are used to formulas, black and white, but not to the gray of daily life," says the pontiff. "And what counts is life, not the formulas."

"We must grow in discernment," he continues. "The logic of black and white can lead to caustic abstraction. Instead, discernment means going beyond the gray of life according to the will of God."

"And you look for the will of God following the true doctrine of the Gospel and not in the fixations of an abstract doctrine," says Francis.

A fear of 'rigid' religious orders

Francis is also asked about the diminishing numbers of people joining religious orders in the Western world, as compared to the large numbers that used to join in the past. The pontiff says he has some concerns about that but he is also concerned some of the newer religious orders that have sprung up in recent decades.

While the pope says some of those orders "are really good and do things seriously," others "are born not from a charism of the Holy Spirit, but human charisma, from charismatic people who attract others by their alluring human skills."

"Some are, I could say, 'restorationists,'" says Francis. "They seem to provide safety and instead they offer only rigidity."

"When I am told that there is a Congregation that attracts many vocations, I confess, I am worried," says the pope. "The Spirit does not work with the logic of human success: the Spirit has another way. But they say to me: there are many young people committing themselves, praying much, they are very faithful."

"Do not put your hope in the sudden and powerful flowering of these Institutes," the pope advises the religious leaders. "Seek instead the humble path of Jesus, that of evangelical witness. Benedict XVI told us well: the Church does not grow by proselytizing but by attraction."

The pope also exhorts the leaders against inappropriate forms of adoration of Mary, saying he hopes they pray to the "true Madonna" and "not the postmistress who sends out a letter every day saying, 'My child, do this and then the next day do that.'"

"The true Madonna is the one who generates Jesus in our hearts, as a Mother," says Francis. "The trend of the Madonna superstar, who puts herself at the center as a protagonist, is not Catholic."

Not only cardinals act as princes

The religious leaders also asked Francis about how they can better structure their lives in their communities.

"Community life?" the pope retorts. "Some saints defined this as a continual penance."

"There are communities where people are at each other’s throats!" says the pontiff. "If mercy does not enter into the community, that is not good."

"For religious, the ability to forgive often has to begin within the community," Francis continues. "And this is prophetic. You begin with listening: let everybody feel they are being heard."

"Superiors need to be listening and persuading," says the pope. "If superiors are continuously rebuking, it does not help create the radical prophecy of religious life. I am convinced that religious have an advantage in giving a contribution to the renewal of the structures and the mentality of the Church."

"A climate of worldliness and of little princes can enter into the structures of the church, and religious have to contribute to destroying this evil climate," says Francis.

"You don’t need to become a cardinal to think of yourself as a prince!" he exhorts. "It is enough to be clerical. This is what is worst in the organization of the Church. Religious can give witness as an upside-down iceberg, where the tip, that is the top, is at the base."

Asked about how to prevent sexual abuse in religious orders, Francis says there is not time in their meeting for a "very articulated response" to the question. But he tells the religious to "be careful in receiving formation candidates to the religious life without evaluating well their sufficient affective maturity."

"Never receive to the religious life or to a diocese candidates that have been rejected from another seminary or from another Institute without asking for clear and detailed information on the motivations for their moving away," the pontiff advises.

Francis also tells the religious that God wants religious orders to be poor, joking: "When they are not poor, the Lord sends a finance officer to send the institute into bankruptcy!"

The pope ends the encounter by returning to his frequent exhortation that the church should be going forth into the world.

"The Church was born going forth," says Francis. "She was closed in the Upper Room and then she went out. And she must continue to go out. She shouldn’t go back to hiding in the Upper Room. This is what Jesus wanted."

The pontiff recommends that the religious re-read his apostolic exhortation Evangelii Gaudium ("The Joy of the Gospel"), which he says "matured in the light of" Paul VI's 1975 exhortation Evangelii Nuntiandi ("Evangelization in the Modern World") and the 2007 meeting of the Latin American bishops in Aparecida, Brazil.

"Go on with courage and without fear of erring!" says Francis. "Those who never make mistakes are those who never do anything. We have to go forward! We will get things wrong sometimes, yes, but there is always the mercy of God on our side!"

Pope Francis at Christmas: God's love is offended by indifference towards the poor

Pope's quotes: No to war

Priests must be men of joy, pope says at Mass