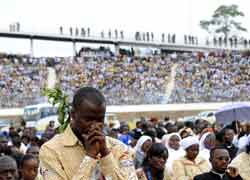 Yaoundè, Cameroon
In Cameroon today, Benedict XVI seemed infected with an ad extra spirit, concentrating on how the gospel message can transform the broader culture. He delivered a largely outward-looking message during his open-air Mass before an enthusiastic crowd of 40,000 at a downtown sports stadium in Yaoundè, then visiting the Cardinal Paul Emile Léger Rehabilitation Centre to express solidarity with a group of disabled and ill people.

He also today presented the instrumentum laboris, or “working paper,” for the upcoming Synod for Africa. Speaking of the church in Africa, the working paper declares that “she ought not to retire into herself,” and calls for a “more prophetic role” in the social and political life of the continent. (Read more about the synod document: Pope unveils African Synod preparation paper.)

One clear emphasis of the document is that the lay faithful working in politics, finance, and other sectors ought to transform African societies from the inside out.

The Mass this morning amounted to a celebration of Catholicism in Africa, the continent where the church has seen the most dynamic growth over the last century. African drums kept up a steady beat throughout the liturgy, native dancers presented the Book of Gospels, and worshippers danced, swayed and sang throughout the Mass.

There were 40,000 people present only because that’s the seating capacity of Yaoundè’s Amadou Ahidjo Stadium. There were also several thousand people gathered outside the stadium, following the liturgy on loudspeakers, and thousands more jammed both sides of Yaoundè’s streets to greet the pope as he came and went. Though the crowd was mainly composed of Cameroonians, there were also large delegations from neighboring nations such as Nigeria.

Reflecting the upbeat, celebratory atmosphere, Benedict said that “Africa can become the continent of hope!”

Later in the day, in a speech to members of the special council for Africa of the Synod of Bishops, the pope seemed similarly rosy. Ever the theologian, he suggested that perhaps a new burst of intellectual creativity on the African continent could lead to the “rebirth … under a different and new form” of the ancient School of Alexandria, which gave the church such influential early fathers as Clement and Origen.

During his morning Mass, Benedict urged Africans to defend the traditional “human and spiritual values” of their cultures, resisting “the tyranny of materialism” and its “scant concern for the most deprived.” Among other things, the pope pointed to “rapid urbanization” and “a rural exodus” in Africa as social forces that need to be confronted without sacrificing Africa’s traditional identity.

The pope also delivered a strong pro-life message, on a continent where the church’s positions on “life issues” such as abortion and homosexuality generally enjoy strong social consensus.

“Every human being, every tiny human person, however weak, is created ‘in the image and likeness of God,’” the pope said. “Every person must live! Death must not prevail over life! Death will never have the last word!”

He returned to this pro-life theme during an afternoon visit to the center for the disabled. Speaking to doctors and researchers, the pope called on them to “protect human life … from conception to natural death.”

“For every person, respect for life is a right and at the same time a duty, since all life is a gift from God,” the pope said.

The bulk of his talk this afternoon, however, was devoted to a prayerful reflection on the mystery of the Cross as applied to the situation of sick and suffering people. Noting that Simon of Cyrene, who helped Christ carry the Cross, was “an African, a son of your continent,” the pope called upon every African to be “a member of the family of Simon of Cyrene,” reaching out to people in pain.

The event seemed to catch Benedict in a pastoral mood.

“Before a brother or sister plunged into the mystery of the Cross, a respectful and compassionate silence, a prayerful presence, a gesture of tenderness and comfort, a kind look, a smile, often achieve more than many words,” he said.

The pope also expressed his solidarity with the sick and injured.

“As I stand here today, I am mindful of all the people in hospitals, specialized health care centers or clinics, who suffer from a mental or physical disability,” Benedict said. “I also think of those whose flesh bears the scars of wars and violence. I remember too all the sick and, especially here in Africa, the victims of such diseases as AIDS, malaria and tuberculosis.”

This was the pope’s first mention of the AIDS crisis since his brief comments aboard the papal plane, made in response to a reporter’s question, suggesting that condoms should not be part of anti-AIDS efforts triggered wide international debate.

Before leaving the center, Benedict came down from the dais and spent an extended period personally greeting the dozens of disabled persons, many in wheelchairs, who had turned out. Many wept, kissed and embraced the pope, and shoved gifts into the hands of his aides.

Tomorrow, Benedict will take part in a brief departure ceremony at the Yaoundè airport before leaving for Angola for the second leg of his Africa swing. Upon his arrival in Luanda, the Angolan capital, Benedict will visit President Jose Eduardo Dos Santos, address a group of political and civil leaders, and then meet with the bishops of Angola and San Tome.

'The Simpsons' and the Vatican press