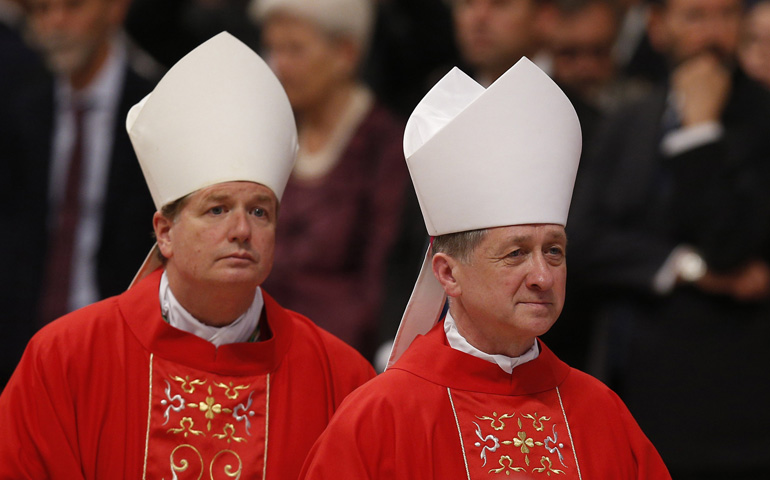 Archbishops Anthony Fisher of Sydney and Blase Cupich of Chicago leave after attending Pope Francis' celebration of Mass on Monday marking the feast of Sts. Peter and Paul in St. Peter's Basilica at the Vatican. (CNS/Paul Haring)

Pope Francis gave a forceful message to the world's newest Catholic archbishops Monday, telling prelates who traveled from around the globe for a special Mass in their honor that they should live lives "coherent" with what they preach to Catholics in their dioceses.

In his homily in St. Peter's Basilica, Francis told the 46 new archbishops installed in different global cities in the last year: "The church wants you to be men of witness."

"There is no witness without a coherent life," the pope continued, quoting St. Francis of Assisi's admonition to his followers: "Preach the Gospel always and, if necessary, use words."

"The thing is so easy!" the pope said. "The most effective and authentic witness is that of not contradicting, with your behavior and your life, what is preached with the word and taught to others."

The pope spoke Monday during a solemn Mass celebrating the feast of Sts. Peter and Paul, the Catholic liturgical event that recognizes the martyrdom of the two apostles and the foundation of the Roman church.

A centerpiece of the Mass was the pope's blessing of a liturgical vestment for each of the new archbishops, a long piece of woolen cloth called a pallium that signifies their role as shepherds and their ties to each other and the pope.

Two of the 46 new archbishops present for the Mass were Americans: Chicago's new archbishop, Blase Cupich, and the new leader of the church in Santa Fe, N.M., John Wester. Among others were archbishops recently named from every part of the world, including Greece, Spain, the Philippines, Japan, Niger, Haiti, Mexico and Slovenia.

Francis offered his message to the prelates by speaking to them directly at the end of his homily for the occasion, which focused on how the Christian life is a call to prayer, faith and witness.

The pope was reflecting on the Bible readings of the day, the first of which sees Peter freed from prison and certain death by an angel of God. The Gospel for the day, taken from Matthew, sees Jesus tell Peter: "You are Peter and upon this rock I will build my church."

Addressing them as "dear archbishops," Francis first told the prelates the church wants them to be "men of prayer, masters of prayer" that teach their people they are liberated by God from every form of imprisonment. He also said: "For those most in need, may you be angels and messengers of charity."

"The church wants you to be men of faith, masters of faith, that teach the faithful to not have fear of the many Herods that afflict them with persecutions, with crosses of every type," the pope told the archbishops.

"No Herod is able to extinguish the light of hope, faith, and love of the one who believes in Christ," he said.

Earlier in the homily, Francis again called for a church that is always going forth. He said being at prayer is to be always be moving ahead, being assured of the protection of God.

"The community of Peter and Paul teaches us that a church in prayer is a church on her feet, strong, on the path," he said. "Indeed, a Christian who prays is a Christian who is protected, guarded and sustained, and above all, who is never alone."

The pope also asked for a church that is always giving testimony to the Christian life.

Monday's Mass was marked by a change in ceremony for the pope's yearly gift of the palliums to the new archbishops, signifying the emphasis Francis puts on decentralizing church authority.

Where in past years the pope vested each archbishop with the liturgical cloth during the Mass, this year, Francis only blessed each of the palliums. The archbishops will instead be vested with the cloth at a ceremony in their dioceses by the apostolic nuncio to their country.

The pallium is one of the oldest liturgical vestments, believed to date from the fourth century. It is a 12-inch-long band of wool decorated by crosses worn by archbishops over their vestments during Masses in their archdioceses as a sign of their authority, particularly over dioceses in their ecclesiastical provinces.

Cupich has been leading a delegation of pilgrims in Rome from the Chicago archdiocese for his receipt of the pallium. The archbishop also had a private meeting with the pope, the first personal encounter between the two, on Friday afternoon.

Also attending the Mass Monday was Orthodox Metropolitan John Zizioulas, a representative of Ecumenical Patriarch Bartholomew. At the end of the ceremony, John and Francis prayed together at the tomb in the basilica believed to be that of Peter.