Pope Benedict leaves behind legacy full of ups and downs 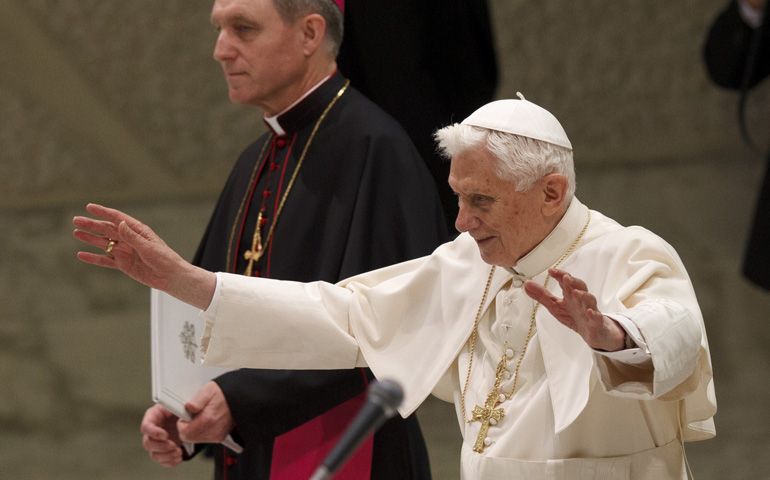 Pope Benedict XVI greets pilgrims as he begins his Feb. 6 general audience in Paul VI hall at the Vatican. Also pictured is Archbishop Georg Ganswein, prefect of the papal household and the pope's personal secretary. (CNS/Paul Haring)
This article appears in the Benedict Resigns feature series. View the full series.

Rome — John Paul II used to be known as the pope of surprises, forever doing things Roman pontiffs simply hadn't done before. With the election of Benedict XVI, many believed the era of papal novelties had drawn to a close, since Benedict has always been a man of tradition and the main lines of his papacy were fairly predictable from the theological and cultural concerns he had expressed over a long public life.

In the end, however, Benedict XVI proved to be capable of a true stunner, becoming the first pope to voluntarily resign his office in centuries and the first to do in the modern media-saturated age. Acknowledging what he called his "incapacity to adequately fulfill the ministry entrusted to me," Benedict has announced he will step down effective 8 p.m. Rome time Feb. 28.

Immediately, Benedict's decision has both won wide praise as a responsible and humble act and raised a whole rafter of questions. Chief among them: What exactly will be the role of a retired pope? And, naturally, many have already begun to speculate about who might capture the two-thirds support in the College of Cardinals necessary to take over the church's top job.

Benedict's decision also means the debate over his legacy is now officially open, and as with all things, it's likely to draw widely different verdicts depending on who's performing the evaluation.

Regarded as among the most accomplished Catholic theologians of his generation, Benedict XVI was what church historians call a "teaching pope" as opposed to a governor. His passion was invested in his teaching documents, his speeches on foreign trips, his regular catechesis at the Vatican, and the three books on the life of Christ he published. This teaching often struck people as profound and surprisingly free of ideological edge.

Even some of the pope's fiercest critics on other fronts expressed admiration.

When Benedict released his encyclical Deus Caritas Est in 2005 on human love, applause came from Swiss theologian Hans Küng, an erstwhile colleague of Joseph Ratzinger and a leading voice for liberal Catholic dissent.

"Papa Ratzinger takes on with his inimitable theological style a richness of themes of eros and agape, of love and charity," Küng said. He called the encyclical "a good sign" and expressed hope that it would be "received warmly, with respect."

Many observers believe four cornerstone speeches delivered by Benedict XVI -- at Regensburg, Germany, in 2006; at the Collège des Bernardins in Paris in 2008; at Westminster Hall in London in 2010; and at the Bundestag in Germany in 2011 -- will be remembered as masterpieces laying out the basis for a symbiosis among faith, reason and modernity.

If Benedict never became the media darling his predecessor was, he still fared strikingly well on the public stage. His trips drew enthusiastic crowds, and turnout at his public audiences actually exceeded John Paul's numbers. He even developed a popular touch, launching his own Twitter account and inspiring a children's book purportedly written by his cat, Chico.

Yet for every triumph, the cerebral pontiff also ran headlong into crisis.

Early on, Benedict's Regensburg speech touched off Islamic protest because of his quotation of a Byzantine emperor who linked Muhammad with violence. Churches were firebombed in the West Bank and Gaza Strip while an Italian nun was shot death in Somalia. On the one-year anniversary, a missionary priest was killed in Turkey.

It was a harbinger of things to come. In 2011, Italian journalists Andrea Tornielli and Paolo Rodari published a 300-page book documenting the most notorious crises during the Benedict years, including:

It's a measure of how bad things sometimes were that this is far from a complete list.

The authors also could have included Benedict's 2007 trip to Brazil, where he seemed to suggest that indigenous persons should be grateful to European colonizers; blowback to a 2009 decree moving the controversial wartime Pope Pius XII closer to sainthood; and the surreal "Boffo case" in 2010, featuring charges that senior papal aides had manufactured fake police documents to smear an Italian Catholic journalist, including the claim that he harassed the girlfriend of a man with whom he wanted to carry on a gay affair.

This pattern reached a crescendo with the notorious "Vatileaks" affair in 2012 involving a tidal wave of secret Vatican documents that appeared in the Italian media, the most serious featuring allegations of financial corruption and cronyism. An investigation ended with the arrest, trial, conviction and pardon of Paolo Gabriele, a married Italian layman who had served as Benedict's butler since 2006, for being the mole.

To many observers, the affair captured the Vatican at its most disedifying, fostering perceptions of in-fighting, cover-ups and disarray.

To be fair, Benedict's record as a manager also included some breakthroughs. For the most part, he appointed people of personal integrity to senior positions; he committed the church to several reforms on sex abuse; and he launched a sort of financial glasnost, including opening the Vatican for the first time to outside inspection of its anti-money-laundering policies. The overall narrative of dysfunction, however, made those stories hard to tell.

Benedict XVI largely steered clear of geopolitics, rarely standing on the front lines of history like John Paul II. His focus was more on the church's internal life, calling it to a stronger sense of traditional Catholic identity vis-à-vis a highly secular age. In that sense, Benedict XVI consolidated the more conservative, "evangelical" direction set by John Paul.

Benedict repeatedly denounced same-sex marriage, radical feminism and an "ideology of gender," triggering blowback from women's groups, secular liberals and the more progressive wing of his own flock. He steered liturgical practice, a special passion, in a more traditional direction. At the same time, some aspects of his teaching also irritated the right, including his critique of capitalism and a strong environmental emphasis for which he was dubbed the "Green Pope."

The pontiff could also flex disciplinary muscle. A sweeping crackdown was launched of the Leadership Conference for Women Religious, the main umbrella group for leaders of women's orders in the United States; liberal theologians were censured, including several high-profile Irish priests and Mercy Sr. Margaret Farley in the United States; and American priest Roy Bourgeois was excommunicated over his support for women's ordination.

In the end, the first draft of history perhaps boils down to this: Benedict XVI was a magnificent public intellectual, a mixed bag as CEO, withdrawn as a statesman, and a church leader whose "politics of identity" cheered some and horrified others.

Whatever else one might say, no one disputes that Benedict XVI was a keen cultural critic. He asked searching questions of both the church and the world, and offered his own provocative answers, thereby proving that institutional Catholicism still has some intellectual gas left in the tank. In that sense, British Prime Minister David Cameron may have provided the best epitaph while bidding the pontiff farewell at the Birmingham airport on Sept. 20, 2010, after a four-day swing in Scotland and England.

Pope says Christians must learn to patiently endure trials, each other