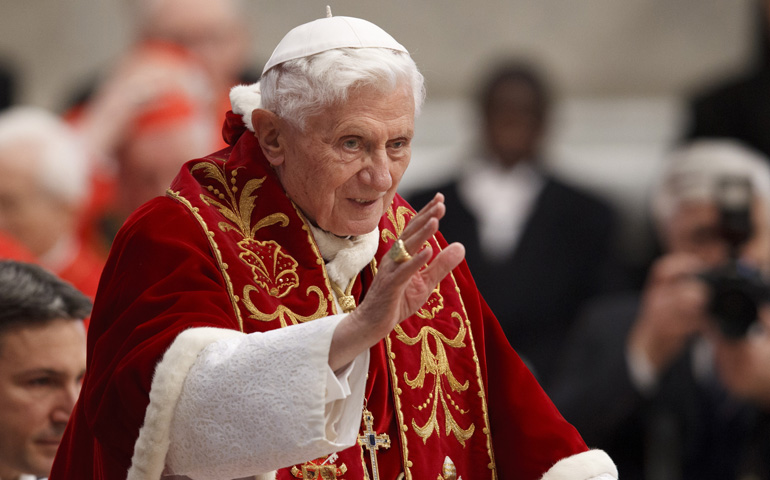 Pope Benedict XVI greets the crowd as the arrives to make remarks at the end of a Mass for the Knights of Malta in St. Peter's Basilica on Saturday at the Vatican. (CNS/Paul Haring)

Pope Benedict XVI intends to resign at the end of this month. The resignation will be effective at 1900 GMT on Feb. 28.

The 85-year-old pope announced his decision in Latin during a meeting of Vatican cardinals Monday morning.

The Associated Press reports that Benedict said this morning: "After having repeatedly examined my conscience before God, I have come to the certainty that my strengths due to an advanced age are no longer suited to an adequate exercise of the Petrine ministry."

Eleven cardinals from the United States are under the age of 80 and will be able to vote in the next conclave:

No date has yet been set for the conclave, but Jesuit Fr. Frederico Lombardi tells Religion News Service that the church should have a new pope by Easter, March 31.

Lombardi said once Pope Benedict has resigned, he will move to a monastery of cloistered nuns inside the Vatican.

VATICAN CITY -- Saying he no longer has the strength to exercise ministry over the universal church, Pope Benedict XVI announced Feb. 11 that he would be resigning at the end of the month.

"After having repeatedly examined my conscience before God, I have come to the certainty that my strengths, due to an advanced age, are no longer suited to an adequate exercise of the Petrine ministry," the pope told cardinals gathered for an ordinary public consistory to approve the canonization of new saints.

Pope Benedict, who was elected in April 2005, will be the first pope to resign in almost 600 years.

He told the cardinals, "In today's world, subject to so many rapid changes and shaken by questions of deep relevance for the life of faith, in order to govern the barque of St. Peter and proclaim the Gospel, both strength of mind and body are necessary, strength which in the last few months, has deteriorated in me to the extent that I have had to recognize my incapacity to adequately fulfill the ministry entrusted to me."

The pope has had increasingly trouble walking in the past year, often using a cane and always being assisted getting up and down steps. However, the Vatican has never released medical information that would make it appear the pope suffers from anything other than joint pain connected to his age.

The option of a pope to resign is explicitly written into the Code of Canon Law. It says a pope may step down, but stipulates that the decision must be made freely and "duly manifested."

Fulfilling the canonical requirement, Pope Benedict solemnly declared to the cardinals, "Well aware of the seriousness of this act, with full freedom I declare that I renounce the ministry of bishop of Rome, successor of St. Peter, entrusted to me by the cardinals on 19 April 2005, in such a way, that as from 28 February 2013, at 20:00 hours, the See of Rome, the See of St. Peter, will be vacant and a conclave to elect the new supreme pontiff will have to be convoked by those whose competence it is."

It is up to the dean of the College of Cardinals, Cardinal Angelo Sodano, to make preparations for a conclave to elect a new pope.

Before ending his remarks, Pope Benedict told the cardinals, "I thank you most sincerely for all the love and work with which you have supported me in my ministry and I ask pardon for all my defects. And now, let us entrust the holy church to the care of our supreme pastor, our Lord Jesus Christ, and implore his holy Mother Mary, so that she may assist the cardinal fathers with her maternal solicitude, in electing a new supreme pontiff."

The pope made no mention of his future plans, other than to say, "I wish to also devotedly serve the holy church of God in the future through a life dedicated to prayer."

More news as it arrives.