Pope calls church to be 'humble' model on abuse 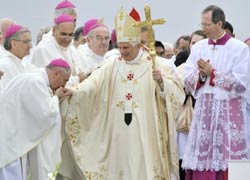 Bishops greet Pope Benedict XVI as he arrives for Mass and the beatification of Cardinal John Henry Newman at Cofton Park in Birmingham, England, Sept. 19. (CNS/Reuters)

LONDON -- In his final act before departing the U.K. for Rome, Pope Benedict XVI has challenged the Catholic church to “humbly” present itself as a model for all society in the protection of children and young people from abuse.

It marked the fourth time the pontiff has addressed the sexual abuse crisis during his Sept. 16-19 trip to Scotland and England. The crisis has not taken on the same dimensions here as in the United States, Ireland, Germany, and other countries, but it nevertheless formed an important subtext to the trip.

This was the first time the pope has explicitly suggested that the experience accumulated by the Catholic church over the last decade could be a model for the wider world.

“Your growing awareness of the extent of child abuse in society, its devastating effects, and the need to provide proper victim support should serve as an incentive to share the lessons you have learned with the wider community,” Benedict said.

Vatican | Pope calls church to be 'humble' model on abuse