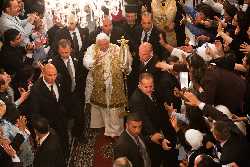 If the opening two days of Pope Benedict XVI’s stop in Jordan, the first leg of his Middle East swing, were largely devoted to outreach to Muslims, the pontiff’s third day was clearly for the Christians – not only in Jordan, but the entire Middle East region.

To sum up the pope’s message to this embattled flock in a single word, it was “persevere.”

The pope celebrated Sunday Mass in a downtown sports stadium in Amman this morning, where the crowd included not only Jordanians but also Iraqis, Lebanese, Syrians, and Christians from other countries in the region. In the afternoon, the pope visited Bethany beyond the Jordan, a site associated with the baptism of Christ by John the Baptist in the Jordan River.

Christians in this part of the world certainly needed the shot in the arm that a papal visit represents, since demographically speaking, their very survival is at stake.

In 1948, Christians represented 20 percent of the population in what is now Israel and the Palestinian Territories; today they’re less than two percent, roughly 150,000 believers amid 7.4 million Israelis and almost 4 million Palestinians. The same pattern holds all across the Middle East; the total number of Arab Christians in the region is thought to have dropped from 25 million in 1975 to 12 million in 2005. Most of those who have left now live in émigré communities abroad, including the United States.

This morning’s Mass reflected these broad downward trends. In Amman, a city of 2.5 million, the pope drew perhaps 25,000 people, and some were from outside Jordan.

Speaking in English, as he has throughout his time in Jordan, Benedict called upon these embattled Christians to “persevere in faith, hope and love,” despite the “difficulties and uncertainties which affect all the people of the Middle East.”

The pope also implored the local Christians to “maintain the church’s presence in the changing social fabric of these ancient lands.”

Benedict did not lay out any detailed survival strategy, but he did indirectly call upon Christians not to lose their nerve despite their declining numbers.

“In the Middle East, marked by tragic suffering, by years of violence and unresolved tensions, Christians are called to offer their contribution, inspired by the example of Jesus, of reconciliation and peace through forgiveness and generosity,” Benedict said.

The pope also asked Christians to challenge ways of thinking which “justify taking innocent lives,” providing an example instead of “the love which inspires us to lay down our lives in service of others.”

Benedict likewise urged Christians to “build new bridges to enable a fruitful encounter of people of different religions and cultures.”

Benedict’s message seemed warmly received, but how much difference a simple call to perseverance will make, even from the pope, remains to be seen. The late Pope John Paul II issued a similar appeal during his Middle Eastern pilgrimage nine years ago, and that has done little to arrest the exodus.

Throughout his time in Jordan, however, Benedict has tried to offer small signs of hope. On Saturday, he blessed the cornerstone for a new Catholic university in Madaba, near Amman, operated by the Latin Patriarchate of Jerusalem. Today at Bethany beyond the Jordan, he blessed the cornerstones for two new Catholic churches, one Latin rite and the other Greek Melkite. Among other things, those projects are clearly intended to assert that Christianity has a future in the region.

In a briefing with the press, Jesuit Fr. Federico Lombardi, the Vatican spokesperson, called them “signs of the vitality of the presence of the church in this land.”

Two other notes from day three of the pope in Jordan.

First, Benedict XVI offered some strong words this morning about women. Recalling the key role women have played both in the church and in the broader society of the Holy Land, the pope said: “Sadly, this God-given dignity and role of women has not always been sufficiently understood and esteemed.”

The pope brought this up in the context of 2009 as a “year of the family,” as designated by Catholic leaders in the Holy Land. Nonetheless, his words may have special resonance outside the church too, given long-standing frustrations on the part of some Arab women about what they see as a form of second-class status.

For example, Hanan Jarrar, a 52-year-old Muslim physician who arrived in Jordan with her Palestinian family at the time of the 1967 war, told NCR yesterday that it’s easier to be a Christian man in Arab society than a Muslim woman. Jarrar said thaT gender is often a more important factor in creating obstacles to opportunities such as education and employment than religion.

Second, Benedict’s tribute to the “strong Christian families of this land” was warmly appreciated by the crowd in Amman, given the emphasis that Arab cultures traditionally place upon family ties. Experts say that identification in the region tends to be with family first, then ethnicity, nationality, religion, and other allegiances.

Notably, however, the pope did not allude to one other fact about Christian families in the Middle East, perhaps because it doesn’t bring him much consolation: they tend to be smaller than Muslim families, which experts say is yet another reason why the Christian population is in decline.

Tomorrow, Benedict XVI will take part in a brief departure ceremony at Amman’s Queen Alia Airport before leaving for Tel Aviv, and then Jerusalem, to begin the portion of his journey devoted to Israel and the Palestinian Territories. The highlight of tomorrow’s activity is likely to be Benedict’s visit to Yad Vashem, the chief Holocaust memorial in Israel.

Catechesis is a vocation of service, not a job, pope says