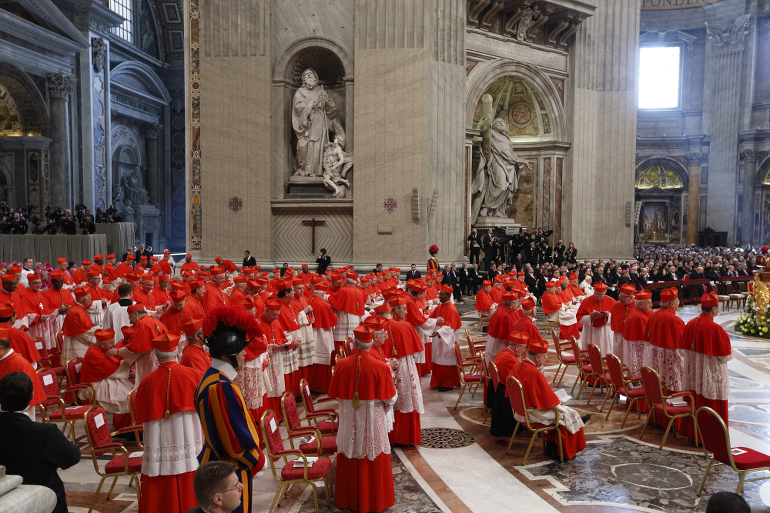 Pope Francis on Saturday told the world's Catholic cardinals they must be kind, strive not to be self-centered and never perpetrate injustice in the running of their dioceses across the globe.

Speaking during a formal ceremony marking the induction of 20 new prelates into the most elite group in the church, Francis outlined for them a vision of governance marked by love, charity and patience.

Most of all, the pontiff said, the men leading the church must never allow themselves to build up anger or govern unjustly.

Reflecting on the role of charity -- saying: "charity, and charity alone, frees us" -- Francis said that virtue "frees us from the mortal danger of pent-up anger, of that smoldering anger which makes us brood over wrongs we have received."

"No," said the pope. "This is unacceptable in a man of the Church. Even if a momentary outburst is forgivable, this is not the case with rancor. God save us from that!"

Continuing to reflect on charity, Francis then quoted St. Paul's admonition that charity "does not rejoice at the wrong, but rejoices in the right."

"Those called to the service of governance in the Church need to have a strong sense of justice, so that any form of injustice becomes unacceptable, even those which might bring gain to himself or to the Church," said the pope. "At the same time, he must 'rejoice in the right.'"

"The man of God is someone captivated by truth, one who encounters it fully in the word and flesh of Jesus Christ, the inexhaustible source of our joy," he said. "May the people of God always see in us a firm condemnation of injustice and joyful service to the truth."

Francis was speaking Saturday in a homily in St. Peter's Basilica during what is formally known as a consistory, a high ceremony marking the creation of new cardinals by the pope.

Cardinals, sometimes known as the "princes of the church" and for their red vestments, are usually senior Catholic prelates who serve either as archbishops in the world's largest dioceses or in the Vatican's central bureaucracy. Their principal role is to gather in secret conclave after the death or resignation of a pope to elect his successor.

While historically cardinals have come from certain larger cities known for their Catholic populations or global importance, Francis has sought to diversify representation in the group -- choosing men from places long underrepresented or even not represented in the College of Cardinals.

During Saturday's ceremony, Francis again diversified representation in the College -- adding 20 prelates from 18 different countries, several from places never before included in the elite group.

Beginning his homily during the ceremony, the pope bluntly told the assembled cardinals that they should not consider their title an honorific, saying: "The cardinalate is certainly an honor, but it is not honorific."

Explaining that the Latin root of the word cardinal, cardo, means "hinge," Francis said being a cardinal "is not a kind of accessory, a decoration, like an honorary title."

"Rather, it is a pivot, a point of support and movement essential for the life of the community," he said. "You are 'hinges' and are 'incardinated' in the Church of Rome, which 'presides over the universal communion of charity.'"

Holding the cardinals' ceremony on what is traditionally celebrated as St. Valentine's Day around the world, the pope was reflecting Saturday on the famous reading from St. Paul's letter to the Corinthians -- that begins "Love is patient; love is kind."

Reflecting on the meaning of the words love and charity -- which are signified in Latin by the same word, caritas -- Francis told the cardinals that charity describes how they should preside over their local churches: Always being kind, never giving in to jealousy or pride, resisting becoming self-centered, and never perpetrating injustice.

"St. Paul tells us that charity is, above all, 'patient' and 'kind,'" said the pope. "The greater our responsibility in serving the Church, the more our hearts must expand according to the measure of the heart of Christ."

"Patience is in some sense synonymous with catholicity," he continued. "It means being able to love without limits, but also to be faithful in particular situations and with practical gestures."

"It means loving what is great without neglecting what is small; loving the little things within the horizon of the great things," said the pope.

He continued: "Kindness means the firm and persevering intention to always will the good of others, even those unfriendly to us."

Moving on to reflect on St. Paul's admonition that love "is not rude, it does not seek its own interests," the pope said those characteristics "show that those who abide in charity are not self-centered."

"The self-centered inevitably become disrespectful," said Francis. "Very often they do not even notice this, since 'respect' is precisely the ability to acknowledge others, to acknowledge their dignity, their condition, their needs."

"The self-centered person inevitably seeks his own interests; he thinks this is normal, even necessary," he said. "Those 'interests' can even be cloaked in noble appearances, but underlying them all is always 'self-interest.'"

"Charity, however, makes us draw back from the center in order to set ourselves in the real center, which is Christ alone," said the pope. "Then, and only then, can we be persons who are respectful and attentive to the good of others."

"The love of Christ, poured into our hearts by the Holy Spirit, enables us to live like this, to be like this," said the pope.

The ceremony marking the creation of the cardinals Saturday saw each of the prelates being named formally receive their cardinals' ring and red hat, known as a biretta, from Francis before St. Peter's high altar.

Each cardinal was then named an honorary leader of a parish church in Rome, from which is traced the cardinal's role in helping elect the pope. From those posts the cardinals are considered the clergy of the city, who then elect their bishop, the pope.

Francis announced his choices of new cardinals last January, choosing prelates from a diverse range of places -- Bishops from the island nations of Cabo Verde and Tonga; archbishops from the Asian cities of Bangkok, Yangon, and Hà Nôi; and the leader of an Italian community dealing heavily with refugees and migrants from Africa.

Of Francis' 20 choices, seven come from Europe, five from Latin America, three from Asia, three from Africa, and two from Oceania. There are none from the United States or Canada.

Only one of the new cardinals currently holds a Vatican post: Moroccan native Archbishop Dominique Mamberti, who recently replaced U.S. Cardinal Raymond Burke as the head of the Vatican's supreme court.

Five of the cardinals named by Francis are over 80, the age at which cardinals can no longer vote in conclaves to elect a pontiff. Announcing the names in January, Francis said he had chosen those five to "represent many bishops that ... have given testimony of love to Christ and the People of God."

19 of the 20 new cardinals were present for Saturday's ceremony: One of those over 80 -- former Manizales, Colombia, Archbishop José de Jesús Pimiento Rodríguez -- has not been able to travel to Rome because of his advanced age. The new cardinal turns 96 on Feb. 18.

There are now 125 cardinals under the age of 80 able to vote in a papal conclave. Francis has named 31 of those prelates, with Pope Benedict XVI naming 60 and Pope John Paul II naming 34.

Despite Francis' diversification, the College of Cardinals remains heavily European and North American, with 75 of the cardinal electors coming from those two continents. Of the rest, 18 come from Central and South America, 15 from Africa, 14 from Asia, and three from Oceania.

Saturday's ceremony was also marked by one image that while once historic is now becoming rote: The presence of a pope and a retired pope together at one ceremony.

Processing into the basilica, Pope Francis greeted his predecessor retired Pope Benedict, with the two smiling and exchanging words for some moments.