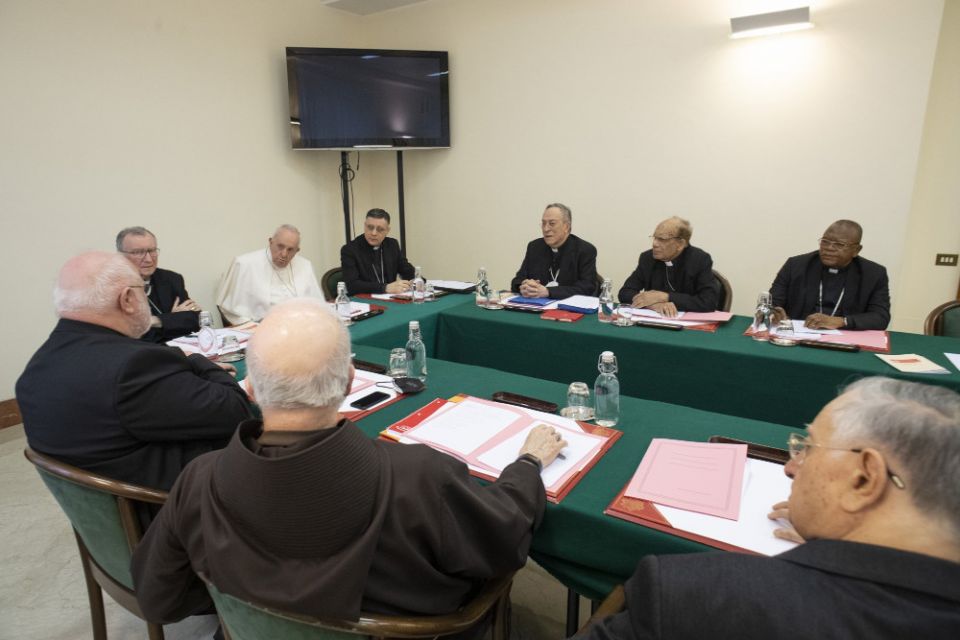 Pope Francis leads a meeting of his Council of Cardinals at the Vatican Feb. 21, 2022. (CNS photo/Vatican Media)

Vatican City — Pope Francis and his international Council of Cardinals met in-person at the Vatican April 25, discussing the war in Ukraine, the Vatican press office said.

There was a discussion about the conflict and its impact on the church, ecumenism and the sociopolitical sphere, the Vatican said April 28.

The cardinals reflected on the situation and supported the different initiatives that have been launched by Francis and the Vatican's secretary and secretariat of state, aimed at finding a peaceful solution, according to the Vatican press office.

Each cardinal then presented a rundown of the different situations on their own continent, touching on such issues as peace, health care, poverty, tenuous political situations and pastoral problems in the local churches, it said.

On his doctor's orders to rest an inflamed knee, the pope was forced to cancel his scheduled appointments April 26, which included that day's session of the Council of Cardinals.

The cardinals spent the day discussing climate change and the upcoming COP27 meeting in Egypt in November. They reflected on what the church could be doing to draw attention to the urgency of the problem. Cardinal Ambongo gave a broader look at the global situation and what expectations came out of the COP26 meeting in Glasgow, particularly in helping poorer nations in Asia, Latin America, Africa and Oceania.

The cardinals also continued an in-depth discussion begun in February on women in the church. The April meeting included a presentation by Sr. Laura Vicuña Pereira Manso, a member of the Congregation of Franciscan Catechists and the Kariri Indigenous community from the Amazon region in Brazil.

The final day, April 27, the cardinals continued a reflection on the Vatican's diplomatic service and the role of the apostolic nuncios. Cardinal Gracias presented a report on the subject, followed by an open discussion.

They ended the session discussing the implementation of the Praedicate Evangelium ("Preach the Gospel"), the papal constitution reforming the Roman Curia, a project Francis began with the Council of Cardinals shortly after taking office in 2013. Published by the Vatican March 19, it will go into effect June 5, the feast of Pentecost.

The cardinals discussed possible ways to implement the new legislation and evaluate next steps and potential challenges.

The council is scheduled to meet again in June.

Editorial: Things are different under Francis