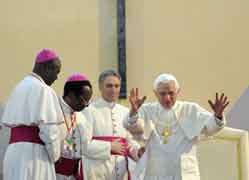 Benedict leaving his meeting with Cameroon bishops in the Church of Christ the King in the Tsinga quarter of Yaounde March 18. (CNS / Reuters)

Yaoundè, Cameroon
On a day in which his focus turned largely to the inner life of the church, Pope Benedict XVI indirectly, yet unmistakably, demanded a halt to financial and sexual scandals that have recently tarnished the image of Catholicism in Africa, a continent that is otherwise perhaps the most compelling “good news” story for the church in the world in light of dramatic 20th century growth.

Speaking to the bishops of Cameroon, the pope called for greater oversight of priests and religious.

“I urge you to be especially vigilant regarding the faithfulness of priests and consecrated persons to the commitments made at their ordination or entry into religious life,” Benedict told the bishops in a meeting in Christ the King Church in Tsinga, outside the national capital of Yaoundè.

“The authenticity of their witness requires that there be no dichotomy between what they teach and the way they live each day,” the pope said.

While welcoming the bumper crop of candidates for the priesthood in Cameroon, the pope urged bishops to exercise “serious discernment” to ensure that future priests are “mature and balanced men.”

Though Benedict did not spell out the backdrop to his comments, local observers say the recent spate of scandal is well-known. In fact, the very setting of the pope’s address to the bishops offered an ironic reminder of the point.

Benedict met the bishops in a parish church rather than the main Yaoundè cathedral, because the cathedral is still undergoing renovations that were supposed to be completed well before the papal visit. Mass-goers and the local government had been asked to contribute funds so that the cathedral’s new bells would be in place to ring out when Benedict arrived. In fact, however, the bells never arrived, the work is not completed, and the former rector of the cathedral was recently replaced amid speculation about missing funds.

The cathedral is not an isolated case. In September 2007, the bishop of the Buea diocese suspended a popular priest, Fr. James Ekwede, amid charges of embezzling church funds. Bishop Immanuel Bushu read the letter of suspension during Mass in his cathedral, ordering Ekwede to vacate his rectory and seek refuge “anywhere he likes.” Similarly last January, Bishop George Nkuo of the Kumbo diocese had to step in after a spat erupted in a local parish, which had led to the pastor placing the entire parish community under interdict, refusing to say Mass or celebrate the other sacraments. In the background were accusations of embezzlement, and the peace deal negotiated by Nkuo involved an agreement that some $500,000 in parish money would be independently audited.

In a nation where corruption and mismanagement of resources is widely regarded as pervasive, it’s perhaps not terribly surprising that there are echoes of it also within the church. Nevertheless, the cases have given the church a black eye.

The church has also been hit by a number of sexual scandals, most involving reports of priests involved in either causal or long-term relationships with women, and, in some cases, having fathered children.

Cameroonian human rights activist Emanuel Neba Fuh published a blistering commentary on these cases in a national newspaper in early March, asking: “What lessons can an already morally impoverished society learn from a bishop or priest who fathers children haphazardly in his community? Or who sponsors a girlfriend’s trip abroad so she can bear him kids, and when he takes his vacation or study leave, he is welcomed abroad by his wife and children? … Or from priests who have become predators to vulnerable children, or who indulge in homosexual acts?”

In an evening vespers service, Benedict XVI returned to the theme. Speaking directly to priests and religious, he insisted that “the way you live ought to show clearly what inspires you, and your actions must not conceal your deepest identity.”

In other comments to the bishops, Benedict praised the contributions of priests and religious, as well as lay catechists and movements, for pursuing “authentic inculturation of the faith,” meaning a distinctively African expression of Catholic identity. He also called upon the bishops to prioritize the liturgy and the family.

Facing the challenge of what Benedict called “sects and esoteric movements,” “the growing influence of superstitious forms of religion,” as well as “secularism,” he urged the bishops to concentrate on formation of children and young adults.

The pope asked Catholic movements, including women’s associations, to be active in promoting “the dignity of women and their particular vocation in the ecclesial community and in society.”

Meanwhile, echoes from the pope’s call yesterday for Christians to speak out against “corruption and abuses of power,” continue to be heard.

Cameroon’s official government-controlled newspaper suggested in an editorial this morning that if Benedict had listened carefully to an address by President Paul Biya during the welcoming ceremony, his concerns would already have been allayed. Most local observers took the piece as a sign that the coterie around Biya feels that the narrative it wanted to present of the trip -- of what massive billboards around town refer to as “perfect communion” between the pope and the president -- is slipping away.

While the 76-year-old Biya gets credit for keeping the peace in a tough neighborhood (Cameroon borders both Chad and Congo-Brazzaville), his regime is also seen as undemocratic, relying on intimidation and corruption, and has frequently been targeted by international human rights and pro-democracy groups.

Perhaps emboldened by the pope’s call, Catholic leaders seem to be seizing the initiative.

In an interview with French radio, Cardinal Christian Tumi publicly called for President Paul Biya, who has ruled Cameroon since 1982, not to extend his grip on power in what are widely viewed as faux elections set for 2011. Observers say it’s unusual for a national figure, especially a religious leader, to publicly suggest that it’s time for Biya to step aside. (Political opposition of any sort has only been legally tolerated since 1992.)

Tomorrow morning, Benedict XVI will meet a delegation of local Muslims before celebrating a public Mass in a downtown sports stadium. In the afternoon, he’ll visit a local Catholic center that cares for sick and suffering people, especially children.

On Friday, Benedict moves on to Angola for the second leg of his March 17-23 Africa journey.

Pope Francis: 'I would love a church that is poor'