Pope on Easter calls for peace in Holy Land 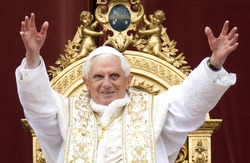 Pope Benedict XVI Sunday called for renewed efforts to bring peace between Israel and the Palestinian territories as he conducted Easter celebrations in St. Peter’s Square.

“Reconciliation, difficult, but indispensable, is a precondition for a future of overall security and peaceful co-existence, and it can only be achieved through renewed, persevering and sincere efforts to resolve the Israeli- Palestinian conflict,”

The pope, who turns 82 on April 16, will travel next month to Israel and the Palestinian territories during his first visit as pontiff to the Holy Land. The visit to Amman, Jerusalem, Bethlehem and Nazareth will take place May 8-15.

“Reconciliation – difficult, but indispensable – is a precondition for a future of overall security and peaceful coexistence, and it can only be achieved through renewed, persevering and sincere efforts to resolve the Israeli-Palestinian conflict,” he said.

“My thoughts move outwards from the Holy Land to neighboring countries, to the Middle East, to the whole world.

“At a time of world food shortage, of financial turmoil, of old and new forms of poverty, of disturbing climate change, of violence and deprivation which force many to leave their homelands in search of a less precarious form of existence, of the ever-present threat of terrorism, of growing fears over the future, it is urgent to rediscover grounds for hope. Let no one draw back from this peaceful battle that has been launched by Christ’s Resurrection. For as I said earlier, Christ is looking for men and women who will help him to affirm his victory using his own weapons: the weapons of justice and truth, mercy, forgiveness and love.”

He gave his traditional Easter greeting in 63 languages, including Arabic and Hebrew.

Vatican | Pope on Easter calls for peace in Holy Land

France says Vatican has not issued response for proposed ambassador

Editorial: Seize this moment of encounter