by Joshua J. McElwee
Vatican
This article appears in the Pope Francis in Iraq feature series. View the full series. 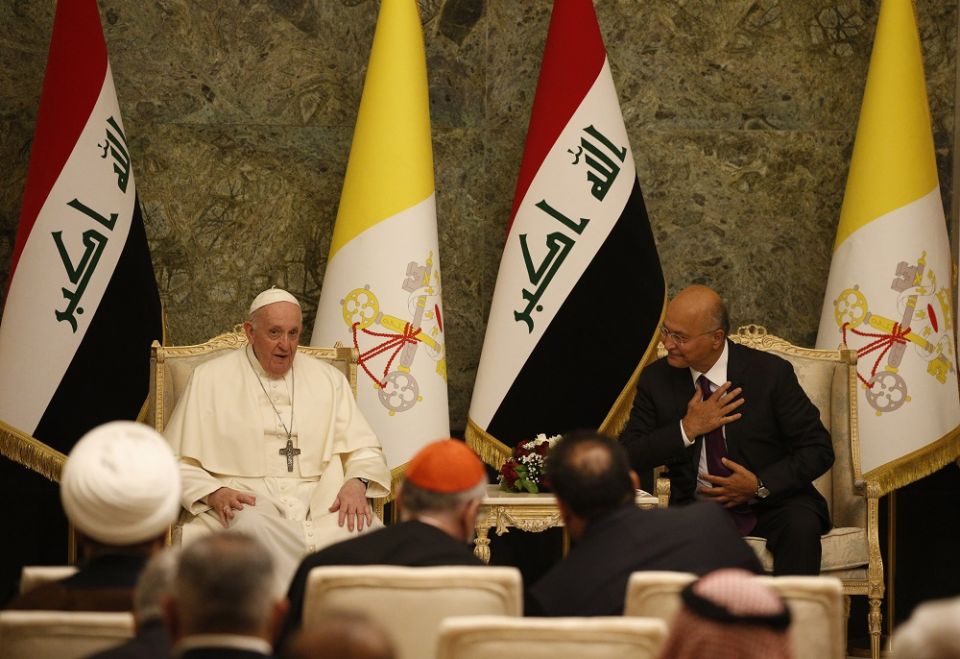 Pope Francis and Iraqi President Barham Salih attend a meeting with authorities, civil society leaders and members of the diplomatic corps in the hall of the presidential palace in Baghdad March 5. (Paul Haring/CNS)

Baghdad — Pope Francis arrived in Iraq March 5 for a three-day visit aimed at encouraging the nation's historic but diminishing Christian community amid tight security measures and worries about how the trip may facilitate the spread of the coronavirus.

Descending from his plane at Baghdad's airport wearing a face mask, Francis was met by a low-key, relatively distanced greeting ceremony of a few dozen soldiers in red uniforms and white helmets.

But despite the Iraqi government's recent imposition of new lockdown measures because of a spike in coronavirus cases, non-distanced and non-masked crowds lined the pope's route towards the presidential palace at various points.

In a speech to the country's political authorities at the palace, Francis said he had come to Iraq as a "penitent" to beg heavenly forgiveness for the "destruction and cruelty" the country had experienced in the years since the 2003 U.S.-led invasion and the rise and fall of the brutal ISIS regime.

Speaking to Iraqi President Barham Salih, Prime Minister Mustafa al-Kadhimi and about 150 other politicians, diplomats and civil servants, the pontiff made impassioned and repeated pleas that the country might avert further conflict.

"May the clash of arms be silenced!" exhorted Francis. "May their spread be curbed, here and everywhere!

"May the voice of builders and peacemakers find a hearing!" said the pope. "The voice of the humble, the poor, the ordinary men and women who want to live, work and pray in peace."

Francis' visit to Iraq, during which the pope is scheduled to visit six cities over three days, is historic on several fronts. It is the first time a Catholic pontiff has visited the Muslim-majority country and the first time Francis has traveled abroad in some 15 months due to the ongoing coronavirus pandemic.

Although some health care professionals have expressed fears that the pontiff's visit could facilitate spread of the virus, the Vatican and local organizers say stringent social distancing and masking protocols are being put in place for each of Francis' events in Iraq.

The pope and those traveling with him were vaccinated by the Vatican in advance of the journey.

Jesuit Fr. Joseph Cassar, the Iraq country director for Jesuit Refugee Service, told NCR that he could not "emphasize enough" the significance of Francis choosing to visit Iraq as his first journey abroad since 2019.

Cassar, a Malta native who has lived in Iraq for five years, pointed to the suffering of Iraqi's Christian community, which was decimated in areas under Islamic State group control from 2014-17.

The visit shows Iraqi Christians that "the pope is really concerned about them," said the Jesuit.

"In a country that has been at war for as many years as Iraq has been to have a visit from Pope Francis with the intention of promoting peace, of encouraging the rebuilding of relationships … it is just phenomenal," she said.

Dennis said she thought Francis wanted to go to Iraq now, despite the pandemic, because he "is feeling tremendous urgency about the need to stop violence in the world."

Francis comes to Iraq as the country has seen a resurgence of violence. A twin suicide bombing in Baghdad Jan. 21 killed at least 32 people and there have been several rocket attacks in recent weeks against U.S.-led coalition forces in different parts of the country.

For the first known time in his eight-year papacy, Francis used a bulletproof car upon landing in Baghdad. At various points on his route to the presidential palace there were also a variety of tanks and armored vehicles keeping watch, and several Boeing tiltrotor Osprey aircraft were seen flying above the papal convoy.

Iraqi security officials portrayed the country as fully capable of protecting the pope. Major General Khaled al-Muhanna, spokesman for the Iraqi interior ministry, told the national Al-Iraqiya channel that he had "no concerns" about the readiness of his forces.

Most Iraqi outlets were covering the visit closely and the hashtag #welcomePopeFrancis was trending in Arabic. 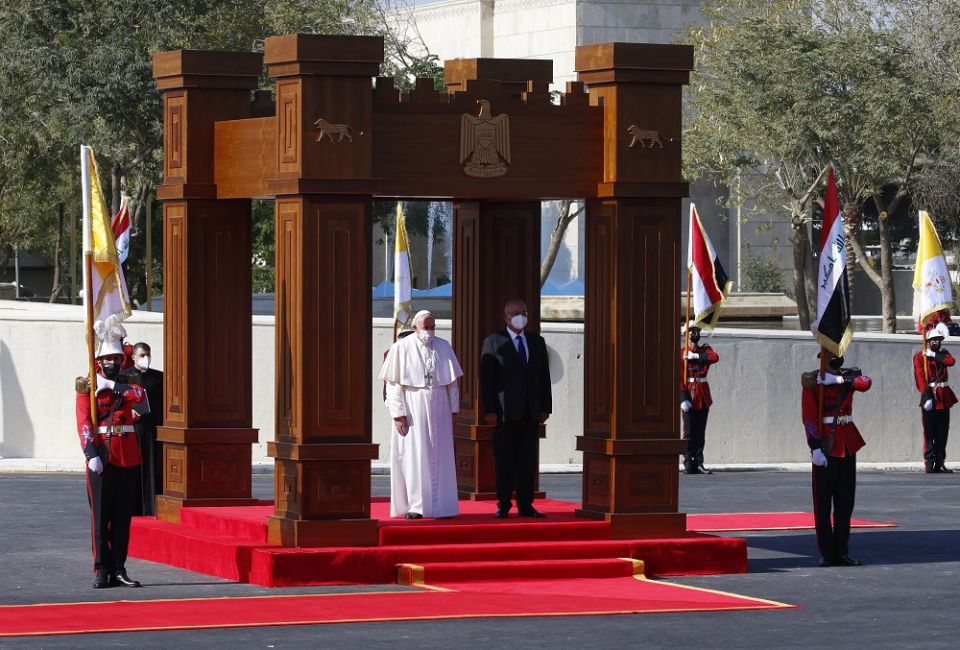 Iraqi President Salih, who spoke before Francis at the palace, told the pope that his decision to come to Iraq despite calls to postpone the visit because of the pandemic and security concerns had "doubled" its effect.

"While you are amongst us in Iraq as a kind and welcome guest, we are living through a historic opportunity to reaffirm the values of love, living together, welcoming one another and supporting diversity," the president told the pope.

Francis told Salih and the other politicians that he had come to the country "as a pilgrim" to encourage its Christians "in their witness of faith, hope and love in the midst of Iraqi society."

The pope did not refer to ISIS by name, but mentioned the "scourge of terrorism" and "fundamentalism incapable of accepting the peaceful coexistence of different ethnic and religious groups."

Francis did however mention one of Iraq's ethnic minorities specifically by name: the Yazidis, who were subject to what the UN has termed a genocide under ISIS. The pope called them "innocent victims of senseless and brutal atrocities."

Officials with Jesuit Refugee Service had expressed hope ahead of the pope's landing that he might specifically draw attention to the plight of the Yazidis. Ryan Birjoo, a communications officer with JRS, had told NCR it would be a "beautiful gesture" for the group, which he said still faces "dire hardship." 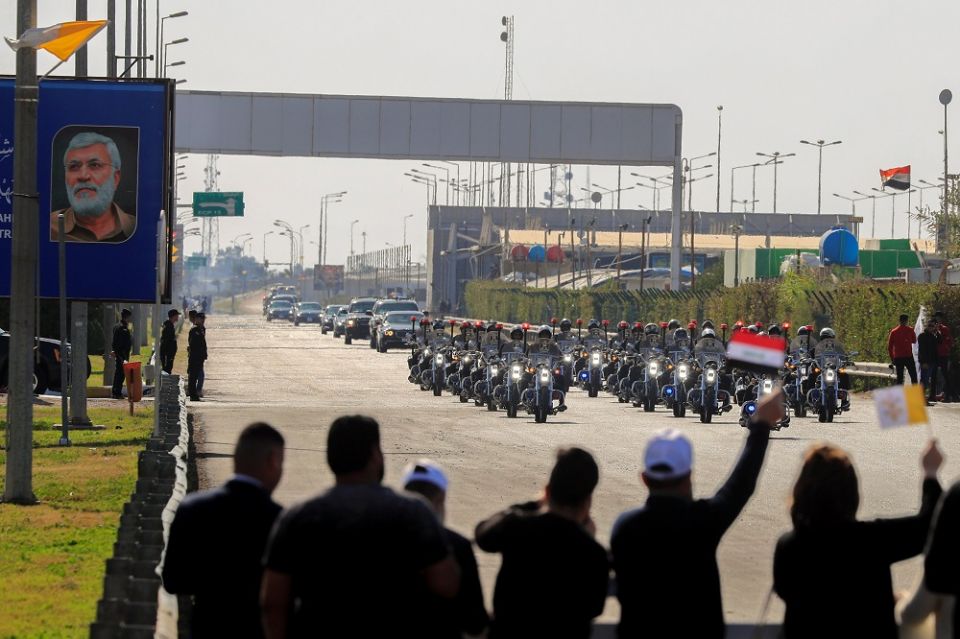 People cheer as Pope Francis' convoy passes in Baghdad March 5,. The pope is on a four-day visit to Iraq. (Thaier Al-Sudani, Reuters/CNS)

In brief remarks to journalists aboard the papal flight to Baghdad, Francis said he was happy to restart his trips abroad after the 15-month pandemic hiatus and felt he had a "duty" to go to Iraq, which he called a "martyred land."

Although Francis came to the back of the plane as usual to greet the journalists one-by-one, he did not shake hands and wore a mask the entire time. With the pontiff, his entourage and the journalists all vaccinated, Italy's Corriere della Sera newspaper speculated that the papal flight may have been the first in world history to carry only COVID-vaccinated passengers.

The pope is to continue his visit in Iraq March 6 by traveling first to Najaf, a holy city for Shia Muslims about 100 miles south of Baghdad. While there, the pontiff is scheduled to take part in a first-of-its-kind encounter with Grand Ayatollah Ali al-Sistani, one of the world's most influential Shiite Muslim clerics.

Francis will then head further south for a visit to the ruins of the ancient city of Ur for an inter-religious meeting. Ur is thought to be the birthplace of Abraham, the biblical figure who is considered the father of Judaism, Christianity and Islam.

On March 7, the focus will shift again to Iraqi Christians, who belong to a range of rites and traditions and include Syriac, Assyrian, Chaldean, Armenian and Melkite communities. Francis will head north to Mosul and Qaraqosh, cities that have historically had significant Christian communities but were decimated under ISIS control from 2014 to 2017.

While Christians once numbered about 1.5 million in a total Iraqi population of about 39 million, their numbers have diminished sharply in the years since the 2003 invasion and are estimated now to number in the hundreds of thousands.

After speaking with the Iraqi political authorities March 5, Francis ended his first day in Baghdad with a visit to the Syro-Catholic Cathedral of Our Lady of Salvation, which was the site of a brutal attack by ISIS fighters in 2010. The fighters walked into a Sunday evening Mass, opened fire and killed at least 48 people.

The pope told Iraqi bishops, priests, and religious gathered inside the sanctuary that he hoped the attack would serve "as a powerful reminder that inciting war, hateful attitudes, violence or the shedding of blood are incompatible with authentic religious teachings."

Francis also mentioned the various rites and communities of Iraqi Christians, saying their variety made him think of tapestry with "so many individually colored threads that woven together make up a single beautiful carpet."

Cardinal Louis Sako, the head of Iraq’s Chaldean Catholic Patriarchate of Babylon, told journalists at the cathedral that the pope’s visit there had been "unforgettable."

"I think that Iraq after this visit will not be the same as it was before," said Sako.

Read Pope Francis' speech at meeting with bishops in Philadelphia

'What is love?' Pope, other elders share stories for Netflix