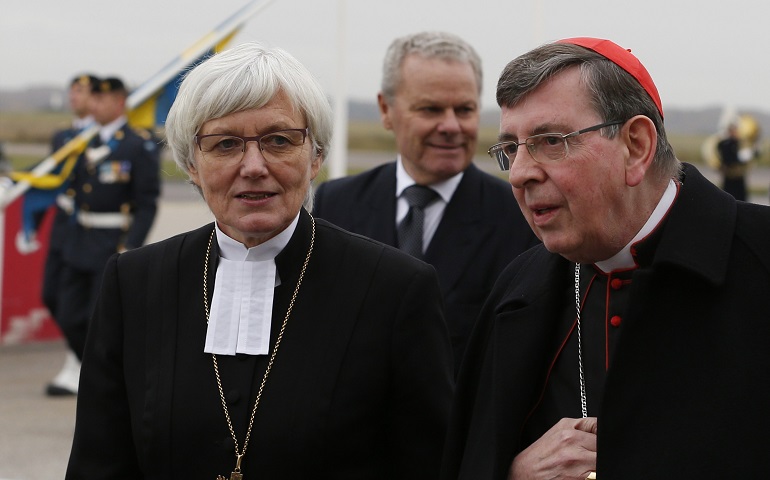 Pope Francis has said he thinks the Roman Catholic church's ban on priestly ordination for women will continue forever, saying his predecessor Pope John Paul II's declaration on the matter "goes in that direction."

Francis expressed his thoughts on the subject in response to a question Tuesday from a journalist aboard the papal flight back to Rome after a two-day visit to Sweden.

The journalist, a Swede, mentioned that among those who welcomed Francis during his visit was Lutheran Archbishop Antje Jackelen of Uppsala. Jackelen is the primate of the Church of Sweden and a woman.

"Is it realistic to think that there might be women priests also in the Catholic church in the next few decades?" the journalist asked the pope.

"On the ordination of women in the Catholic church, the last word is clear," Francis responded, before mentioning John Paul's 1994 apostolic letter banning the practice, Ordinatio Sacerdotalis. "It was given by St. John Paul II and this remains."

"If we read carefully the declaration made by St. John Paul II, it goes in that direction," Francis replied.

"But women can do many other things better than men," the pope continued, before repeating remarks he has said in the past about the Catholic church having two dimensions: a Petrine, apostolic dimension led by the bishops and a Marian dimension, which he called "the feminine dimension of the church."

"People ask me: 'Who is more important in the theology or in the spirituality of the church: the apostles or Mary, on the day of Pentecost?' " he said, adding: "It is Mary!" Emphasizing the point, he continued, "More!"

Francis' remarks about the ban on the priestly ordination of women, given during a 40-minute press conference that also covered several other subjects, do not represent a change in position for the pontiff but appear significant in their finality.

While he has repeated John Paul II's teaching on several other occasions when asked about women's ordination, he has never been pressed on if the teaching could ever change.

Francis was only asked Tuesday about the ordination of women as priests and not as deacons.

Related: "Francis: Countries should accept only as many refugees as they can integrate" (Nov. 1, 2016)

The pope recently created a special 12-member commission to study the historic use of women as deacons in the church, at the request of the Rome-based umbrella group of women religious around the world, the International Union of Superiors General.

Other topics covered in Tuesday's press conference included how migrants and refugees should be welcomed when they are settled in new countries, and the continuing secularization of Europe.