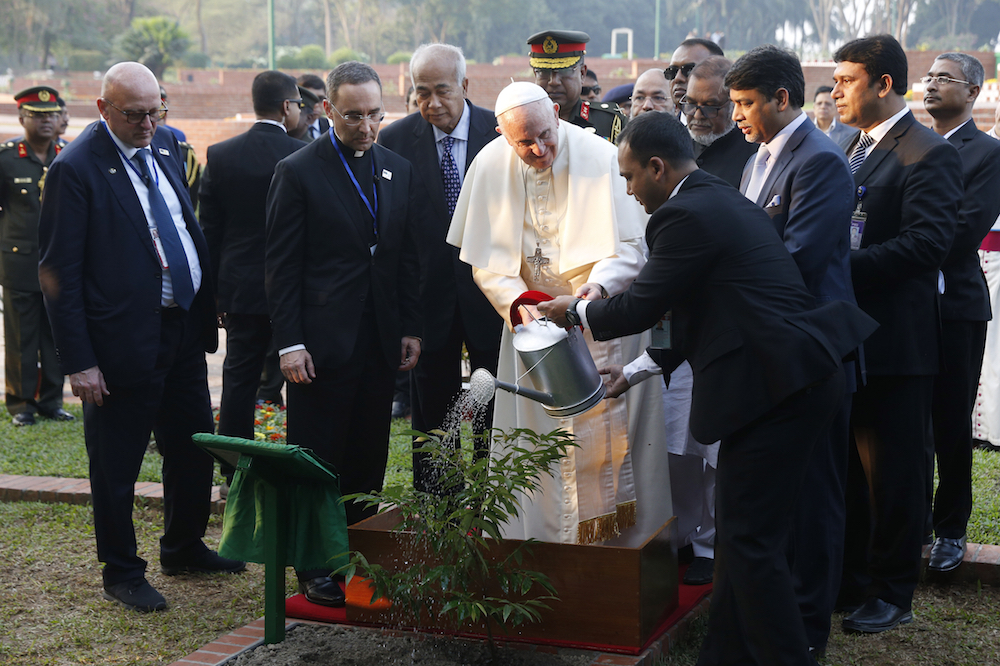 Pope Francis waters a tree he planted during a visit to the National Martyrs' Memorial in Savar, Bangladesh, Nov. 30. (CNS/Paul Haring)

Pope Francis spoke directly about the plight of some 600,000 Rohingya Muslims who have fled to Bangladesh after facing persecution in Myanmar for the first time on his six-day tour of both countries Nov. 30, praising "the spirit of generosity and solidarity" with which Bangladesh has taken in the refugees.

In an address to President Abdul Hamid and dozens of other political leaders at Bangladesh's presidential palace, Francis said his nation's care for the Rohingya had been a "at no little sacrifice" and was a "distinguishing mark" on Bangladeshi society.

Francis also called on the international community to "take decisive measures" to care for the refugees by offering "immediate material assistance to Bangladesh in its effort to respond effectively to urgent human needs."

Francis spoke in Bangladesh Nov. 30 shortly after arriving from Myanmar, where he had been visiting since Nov. 27. The pope had come under some international criticism while in Myanmar for not speaking directly about the Rohingya, although he did tell de facto Prime Minister Aung San Suu Kyi Nov. 28 that her country's future must include "respect for each ethnic group and its identity."

While Francis has referred to Myanmar's treatment of the Rohingya as a "persecution" in the past, local church leaders had advised him to refrain while in the country from explicitly naming them for fear of reprisals from the military, which wields significant power in the nation.

Both the U.S. and the U.N. have termed Buddhist-majority Myanmar's treatment of the Rohingya minority an "ethnic cleansing."

Vatican spokesman Greg Burke said during a press conference Nov. 29 the fact that Francis did not specifically mention the Rohingya while in Myanmar "doesn't take away from anything the pope has said in the past, or from anything he says in private."

The spokesman declined to comment on any conversations Francis may have had with Suu Kyi about the Rohingya during a private meeting together Nov. 28. But he added: "Having said that, if you've watched and followed the pope, he's a very free man."

Although Francis did not use the word "Rohingya" in Bangladesh, he appeared much more at ease to talk publicly about the dire humanitarian situation,, speaking to Hamid specifically about a "massive influx of refugees from Rakhine State," the area in Myanmar from which the Rohingya arrived in Bangladesh. 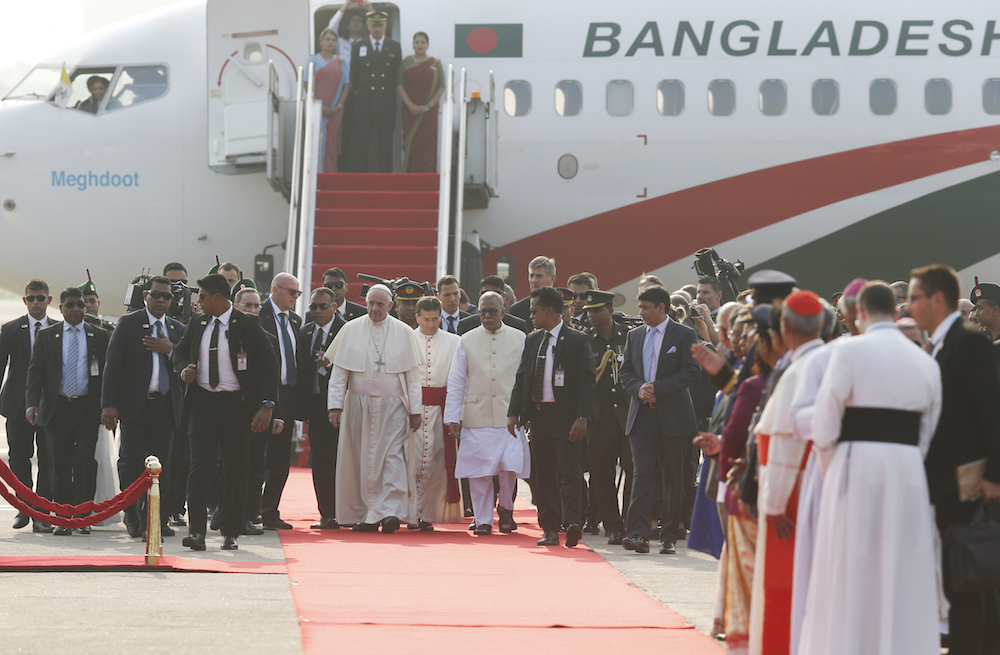 In his address welcoming the pope to the country, Hamid said the Rohingya had been "forcefully displaced from their ancestral home" and some had been "brutally killed" while "others saw their homes burnt into ashes."

"Our people welcomed them with open arms, sharing food, shelter and other basic needs," said the Bangladeshi president. "They accepted the inconvenience of accommodating them in such a densely populated land."

Hamid also said it was the world's "shared responsibility" to grant the Rohingya "a safe, sustainable and dignified return to their own home and integration with the social, economic and political life of Myanmar."

The U.S. ambassador to Bangladesh, Marcia Bernicat, was one of the members of the diplomatic corps present for Francis' address. She praised how the pope put in "explicit terms" the situation of the Rohingya.

"For everyone who bears witness to the suffering that they have been experiencing ... we help amplify their voice," said Bernicat.

While Bangladesh has attracted international praise for accepting some 600,000 Rohingya, it was also the subject of some criticism Nov. 28, after the government announced a plan to relocate some 100,000 of the refugees to a flood-prone island in the Bay of Bengal.

Critics say the plan to develop Bhashan Char Island, two hours by boat from the nearest Bangladeshi settlement, is unrealistic and likely to leave the refugees on the island subject to drastic flooding during the monsoon season.

Francis arrived in Dhaka Nov. 30 to a formal welcome ceremony that featured a loud canon salute and a large delegation of soldiers at attention, but also a group of dancers wearing white and yellow, the colors of the Vatican's flag.

As the papal convoy made its way through the city, people were gathered at intersections, watching the pope pass by in front of corrugated iron-sheeted buildings with little expression on their faces. With the normally heavy traffic stopped for miles, many drivers were standing outside their cars, watching.​ 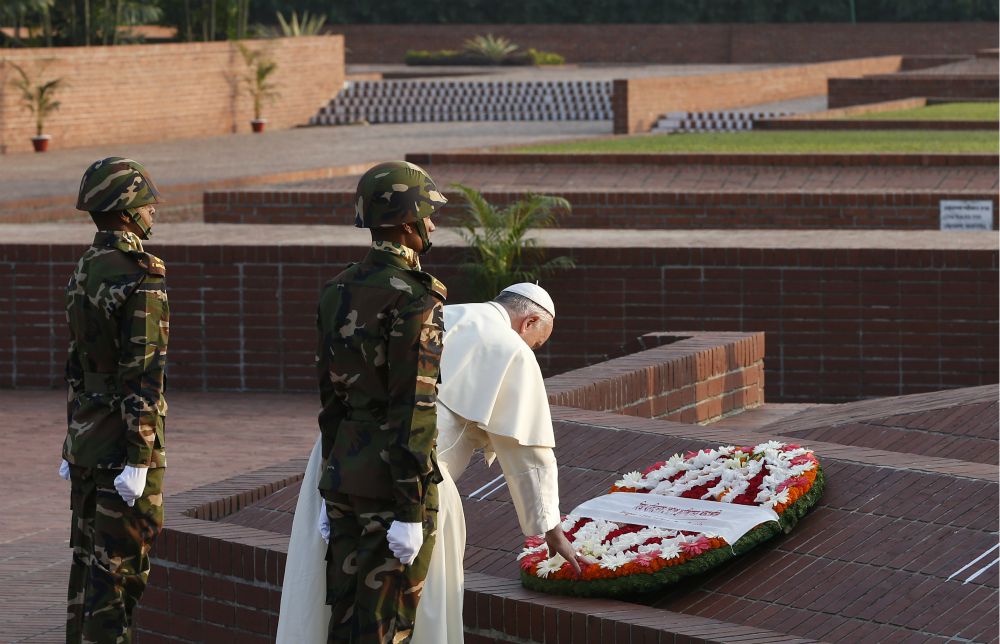 Francis is visiting Bangladesh through Dec. 2. The Vatican says he will greet "a small group" of Rohingya during an inter-religious peace meeting Dec. 1.

Before meeting with Hamid Nov. 30, the pontiff visited two memorials marking different aspects of Bangladesh's war of independence, which led to the country's separation from Pakistan in 1971.

Francis went first to the National Martyrs' Memorial, a towering structure of seven pairs of triangular shaped prisms that represent different chapters in Bangladeshi history. The pope left a wreath of flowers at the base of the monument as buglers played solemnly.​

In the independence memorial's guestbook, the pontiff wrote: "Recalling all those who gave their lives as the nation came to birth, may the people of Bangladesh work truly for justice and the common good."

In the book, under the heading "name," he wrote "Francis." Under "designation," he wrote, "Roman Catholic bishop."

The pope then went to the Bangabandhu Memorial Museum, the former residence of the first president of Bangladesh, Sheikh Mujibur Rahman, who was assassinated in 1975 with most of his family at his home. Francis was met at the former home by five of Sheikh's remaining relatives, and prayed in silence before signing the museum's guestbook.

Francis is to continue his visit to Bangladesh Dec. 1 by celebrating an outdoor Mass, taking part in the inter-religious meeting, giving an address to the country's bishops, and having a meeting with Prime Minister Sheikh Hasina, one of two surviving daughters of the assassinated first president.

Francis is to return to Rome Dec. 2, following meetings with Bangladeshi priests and religious and young people.