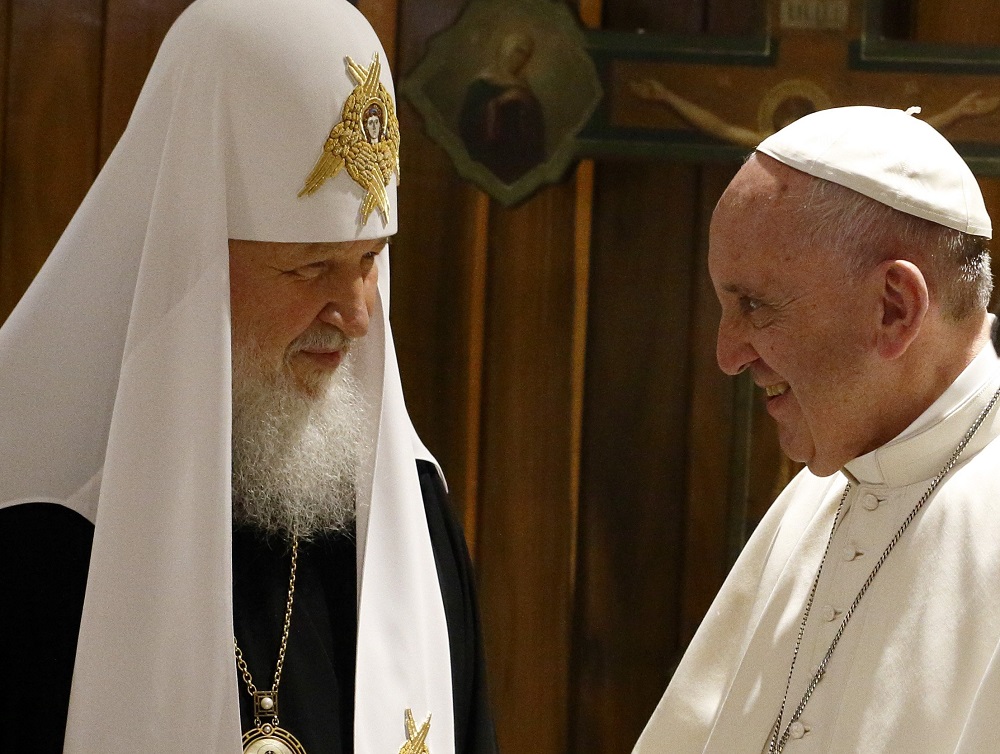 Russian Orthodox Patriarch Kirill of Moscow and Pope Francis smile during a meeting at Jose Marti International Airport in Havana in this Feb. 12, 2016, photo. According to a statement released by the Moscow Patriarchate March 16, Pope Francis spoke via video conference with Patriarch Kirill about the ongoing crisis in Ukraine and the hopes of peaceful solution. (CNS/Paul Haring)

A Vatican communique stated that Francis rejected the justifications for the invasion as a "holy war," saying "today we cannot speak like this."

"Christian awareness of the importance of peace has developed," said Francis. In recent weeks, Kirill has previously used religious language to justify his support for Russia's military aggression.

According to the Vatican statement, the conversation focused "on the war in Ukraine and the role of Christians and their pastors in doing everything possible for peace to prevail."

"We are pastors of the same Holy People who believe in God, in the Holy Trinity, in the Holy Mother of God: for this we must unite in the effort to help peace, to help those who suffer, to seek ways of peace, to stop the fire," Francis told the Russian patriarch, according to the Vatican statement.

“Wars are always unjust. Because the one who pays is the people of God," Francis continued. "Our hearts cannot help but cry in front of the children, the women killed, all the victims of the war. War is never the way. The Spirit that unites us asks us as pastors to help the peoples who suffer from war."

An earlier statement from the Russian Orthodox Church said that the two parties had a "detailed discussion" of the situation in Ukraine.

"Particular attention was paid to the humanitarian aspects of the current crisis and the actions of the Russian Orthodox Church and the Roman Catholic Church to overcome its consequences," it continued. "The parties stressed the exceptional importance of the ongoing negotiation process, expressing their hope for the soonest achievement of a just peace."

Russian Orthodox foreign minister, Metropolitan Hilarion, and an official from the Russian Orthodox's inter-Christian relations, I.A. Nikolaev, joined Kirill for the call in Moscow. At the Vatican, Francis was accompanied by Cardinal Kurt Koch, head of the Pontifical Council for Promoting Christian Unity, and Fr. Jaromir Zadrapa, an official from Koch's office.

During a March 15 discussion at the National Press Club in Washington, D.C., Metropolitan-Archbishop Borys Gudziak of the Ukrainian Catholic Archeparchy of Philadelphia, indicated that Francis' outreach to Kirill since the outbreak of the war had not been reciprocated.

Guziak had hinted this could possibly change soon.

The March 16 video conference between Francis and Kirill marked their first face-to-face reunion since the two men met in Havana, Cuba, in 2016.

That encounter, which was the first ever meeting between a Roman Catholic pontiff and the Russian Orthodox patriarch, seemed to signal a historic breakthrough in Catholic-Russian Orthodox relations and plans were underway for the two to meet in person again this summer.

Kirill's support for Putin's invasion has not only created new ecunenical tensions but led to an unraveling among Russian Orthodox churches around the world.

The Russian patriarch has sought to portray the invasion as an effort to defend against the moral relativism and decadence of the West and argued that Ukraine is part of the "canonical territory" of the Russian Orthodox Church. To date, at least 160 Orthodox parishes in a dozen countries have sought to join other communions since the outbreak of the war.

While Kirill has since expressed his desire for an end to the conflict, he has refused to denounce Putin or Russia's actions against Ukraine, despite pleas from religious leaders from around the globe.

Later in the day on March 16, the Vatican's secretary of state, Cardinal Pietro Parolin, celebrated a Mass for peace in St. Peter's Basilica in the presence of the Vatican's diplomatic corps.

"This is not just a military operation but a war," said Parolin, again offering an explicit rejection from the Vatican of the Russian government's repeated descriptions of their military activities as a "special military operation."

"Don't you think that if we listened more to our Lord's words, weapons would be silent, indeed they would not even be produced and built?" said Parolin during his homily.

"We turn to God with a heart broken for what is happening in Ukraine," he said. "Save this land from destruction and widespread death."