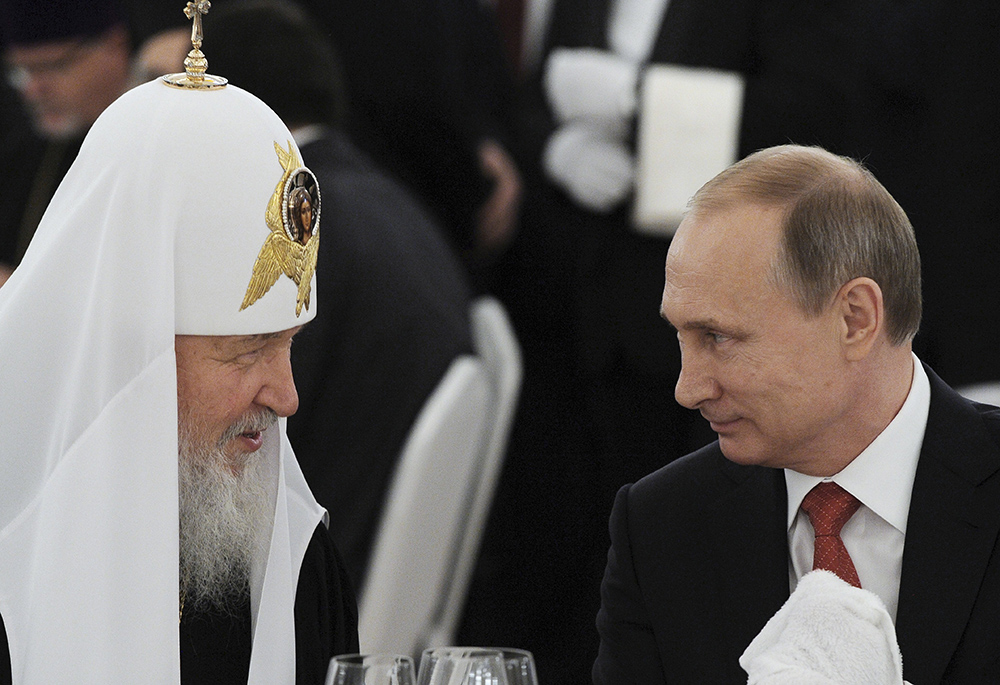 Russian President Vladimir Putin, right, listens to Russian Orthodox Patriarch Kirill of Moscow during a reception commemorating the 1,000th anniversary of the death of Grand Prince Vladimir I, at the Kremlin in Moscow in this July 28, 2015, file photo. Church leaders have appealed to Patriarch Kirill to intervene and ask Putin to stop the bloodshed in Ukraine. (CNS/Kremlin via Reuters/RIA Novosti/Mikhail Klimentyev)

As Russian troops and tanks battled Ukrainian forces during the third week of their bloody invasion, prospects of peace appeared to be fading.

Meanwhile, amid the scenes of wanton destruction, the militant stance of Russian Orthodox Patriarch Kirill also seemed to dash hopes of closer ties between his community and the Catholic Church.

"The vocation of every church is to recall basic Gospel principles — Kirill has not only abandoned this, but is actually sacralizing this cruel aggression," Marcin Przeciszewski, veteran director of Poland's Catholic Information Agency, told NCR.

"The old discourse about Catholic and Orthodox leaders sharing in the defense of traditional Christian values all looks like nonsense now," said Przeciszewski. "The only values Kirill is defending are those of Russian imperialism."

Russian President Vladimir Putin's armies invaded in the early hours of Feb. 24, triggering harsh resistance from Ukraine's 200,000-strong armed forces, as well as a sharp fall in Russia's ruble currency in the face of Western sanctions.

The war followed a low-intensity conflict with pro-Russian separatists in eastern Ukraine's Donbas region after Moscow's February 2014 forced annexation of Crimea, which left over 14,000 dead in eight years.

It also came in the wake of bitter religious disputes in Ukraine, where a new Orthodox church was granted independence in January 2019 by Ecumenical Patriarch Bartholomew, who holds honorary primacy among leaders of the world's 15 main Orthodox churches. 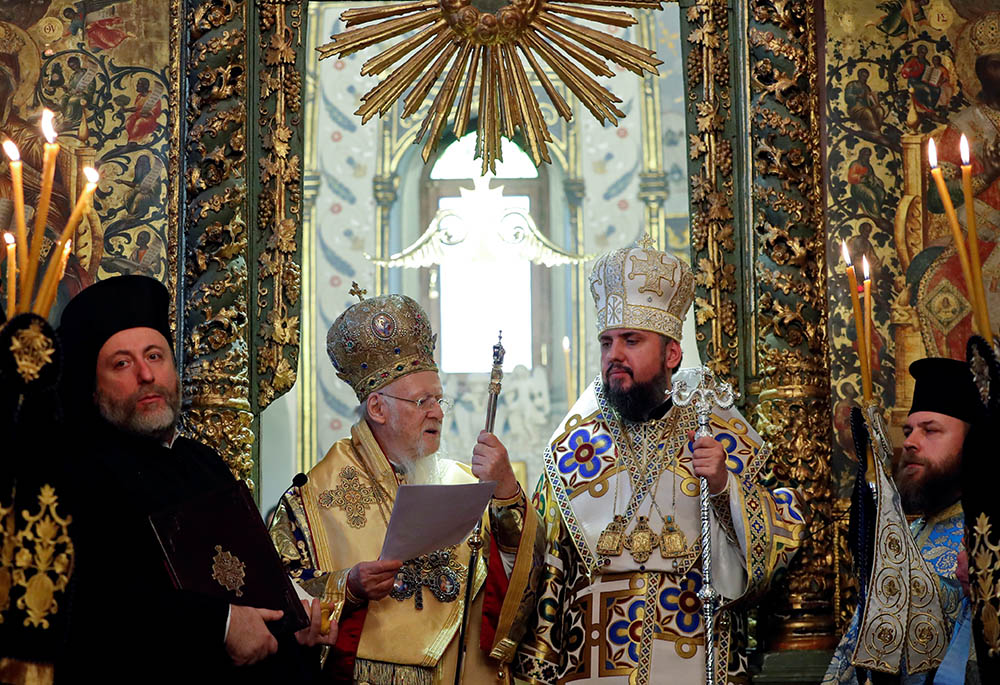 It severed ties with Bartholomew, doing the same later with Orthodox leaders from Greece, Cyprus and Alexandria when they recognized the new church.

In December, Moscow went a step further, and set up two dioceses of its own in Africa, which traditionally comes under the jurisdiction of Alexandria's patriarch, Theodore II, to take in Orthodox priests and parishes unhappy about Theodore's "schismatic behavior."

At least 160 Orthodox parishes in a dozen countries, and some Protestant communities too, have asked to join the new Russian dioceses, lured by promises of material aid and study opportunities, as well as protection by Russian military forces.

And while some Orthodox leaders have accepted the Russian move as a justified response to the Ukrainian church dispute, others have accused the Moscow Patriarchate of using the dispute as pretext for a long-planned expansion.

Whatever its parameters, the bitter church dispute provided a religious backdrop to Russia's invasion. It was referred to in a fateful Feb. 21 TV address by Putin, in which he denied Ukraine's statehood and insisted President Volodymyr Zelenskyy's government was "infringing on believers' rights" and "preparing the destruction" of Ukraine's Moscow-linked church.

Kirill duly responded, lauding the president's "high and responsible service to the people" in a Moscow speech hours before the invasion, and assuring Russia's armed forces they should have "no doubts they have chosen a very correct path."

Although Kirill has since urged peace, he hasn't criticized Russia's missile strikes and artillery barrages, which had leveled whole areas and driven over 2.5 million Ukrainians abroad by March 11, according to the United Nations. 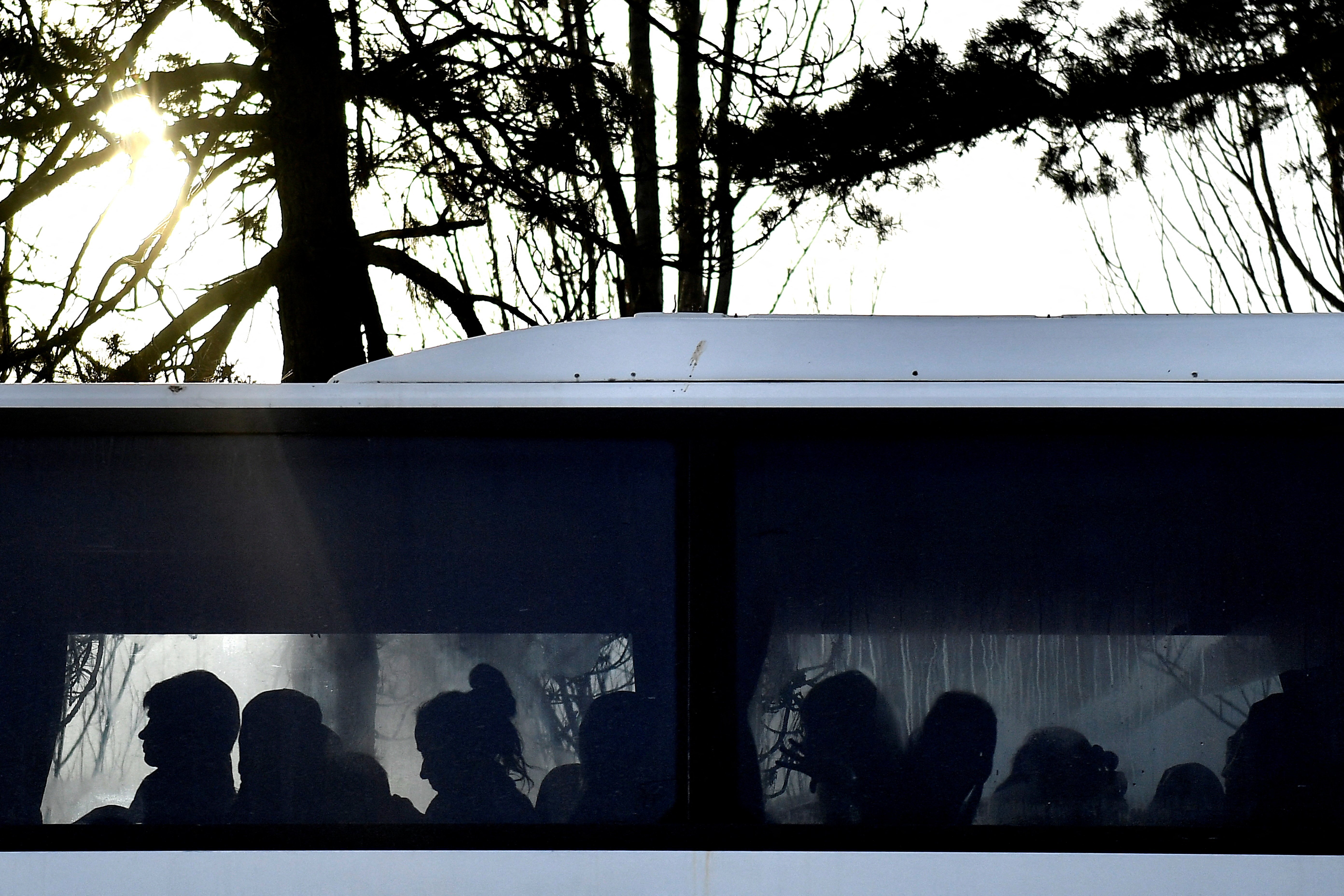 People sit on a bus after fleeing from Ukraine to Romania, following Russia's invasion of Ukraine, at the border crossing March 12 in Siret, Romania. (CNS/Reuters/Clodagh Kilcoyne)

Nor has Kirill questioned the Kremlin's continued demands for Ukraine to surrender unconditionally and accept "demilitarization" and "denazification."

"Alliance with power poses a deadly danger for any church, and Russia's is losing all credibility because of this," said Przeciszewski, whose country has taken in 1.5 million war refugees, on top of 2 million Ukrainians already sheltering there.

"Meanwhile, Ukraine is providing testimony right now that certain values are more important than life itself, something our contemporary world needs reminding of," said the radio director.

Anguished reactions to the war have poured out in Ukraine, where the Council of Churches and Religious Organizations, grouping Christians, Muslims and Jews, denounced Russia's "unjustified cruelty and unrestrained aggression" in a March 8 statement, and urged Western countries to provide military help.

Historic churches had been shelled and bombed, the council added, in cities such as mostly Russian-speaking Kharkiv, where the Orthodox Holy Dormition Cathedral had been damaged, along with the city's Catholic Assumption Cathedral.

The head of Ukraine's independent Orthodox church, Metropolitan Epifaniy Dumenko, confirmed on March 8 that religious sites were coming under fire, despite Russian claims to be "defending the church," and accused invading troops of "trampling on the rules of law" in a repeat of scenes from World War II.

"I understand it makes no practical sense to turn to the Russian occupiers, so I just warn them that each will personally answer to God for the bloodshed, suffering, tears and ruined lives," the 43-year-old metropolitan said in a message after visiting wounded Ukrainian servicemen at Kyiv's National Military Hospital.

"From the thousands of residents of Mariupol, Kharkiv, Chernihiv, Gostomel, Irpen, Bucha and others who are now being killed by Russian troops, I raise my voice and call on states and international institutions to act!" he said. "May the wrath of God and the inevitable retribution promised to these murderers fall upon them!" 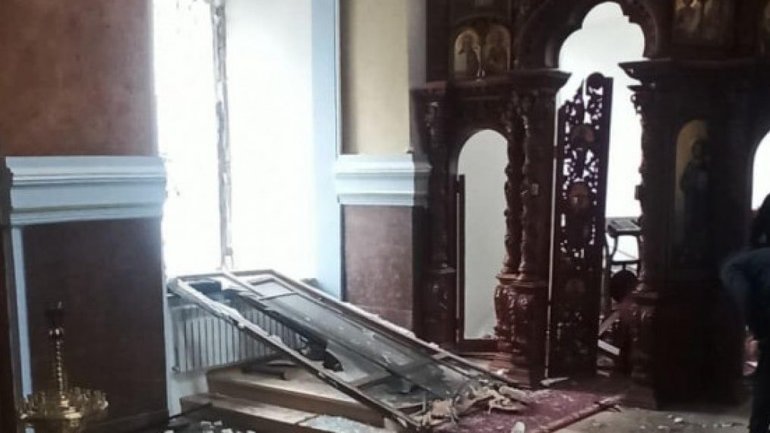 Assumption Orthodox Cathedral is pictured March 3 in Kharkiv, Ukraine, in the aftermath of Russian rocket attacks that hit three churches. (CNS/Courtesy of risu.ua)

So has the head of Ukraine's Moscow-affiliated Orthodox church, Metropolitan Onufriy Berezovsky, as part of efforts to shake of any taint of complicity with the aggressor. In early March, Onufriy approved prayers "for the Ukrainian army, for the power of our state and all its people, for victory and the establishment of peace."

He also appealed to Putin to "do everything to stop the war."

"You can do this, and we believe and want you to do it," the metropolitan told Putin in a statement.

At least 20 Moscow-linked Ukrainian eparchies, or dioceses, have taken the symbolic step of removing Kirill from their prayer lists, citing his failure to condemn the war, while clergy groups are also demanding their church declare independence from the Moscow Patriarchate. A Russian Orthodox church in Amsterdam announced it would split entirely with the patriarchate.

"Though Kirill still claims responsibility for all Orthodox Christians in Ukraine, one can see from his statements that he's really given up being a shepherd to them," one senior Catholic priest in Russia, who requested anonymity for fear of reprisal, told NCR.

"If this war ends with Ukraine remaining free, he'll have united all Ukraine's Christians against him," said the priest. "Even if Ukraine is crushed and becomes one giant prison, it's impossible to imagine him ever visiting the country again."

As more Ukrainian cities are devastated and more civilians killed, more and more appeals for Putin to halt the widening offensive have come from Orthodox leaders abroad. Meanwhile, appeals are also multiplying to Kirill himself.

The Lutheran president of the Geneva-based Conference of European Churches has pleaded with the patriarch to "affirm the value of all human lives, including the lives of Ukrainian citizens who are under attack," and deplored his "daunting silence on the unprovoked war" against a country "home to millions of Christians."

Meanwhile, the president of the Commission of the Bishops' Conferences of the European Union, Cardinal Jean-Claude Hollerich, recalled Kirill's joint call with Pope Francis at their historic Havana meeting in February 2016 "for action aimed at constructing peace and social solidarity," and similarly urged him in a March 8 letter to call on Russia's rulers to "immediately stop the hostilities."

Far from responding, the Russian patriarch's tone has sharpened.

In a March 6 homily for the Orthodox church's Forgiveness Sunday, he offered a moral justification for the invasion, arguing that Orthodox Christians were suffering for "fundamentally rejecting the so-called values offered today by those claiming world power," who were "forcing people to deny God and his truth" and demanding participation in "gay parades" as a "test of loyalty."

Preaching on March 9, the patriarch equated Western countries with "the devil and father of lies," and backed Putin's claim that Ukraine was really part of Russia and needed defending against Western war-mongering.

Writing a day later to Fr. Ioan Sauca, the Romanian Orthodox acting general secretary of the World Council of Churches, Kirill ignored requests from the WCC's 352 member-denominations that he "intervene and mediate" with Russia's rulers for a "peaceful solution." Kirill also blamed the West for stoking church divisions and turning Ukrainians into "enemies of Russia."

"The peoples of Russia and Ukraine, who came from one Kievan baptismal font, are united by common faith, common saints and prayers, and share common historical fate," the patriarch insisted. "This tragic conflict has become a part of a large-scale geopolitical strategy aimed, first and foremost, at weakening Russia and stirring Russophobia."

Although some limited dialogue might still occur with Russian Orthodox leaders, closer cooperation with Kirill's Moscow Patriarchate, along with talk of a follow-up meeting between the patriarch and Francis, is now all but impossible. 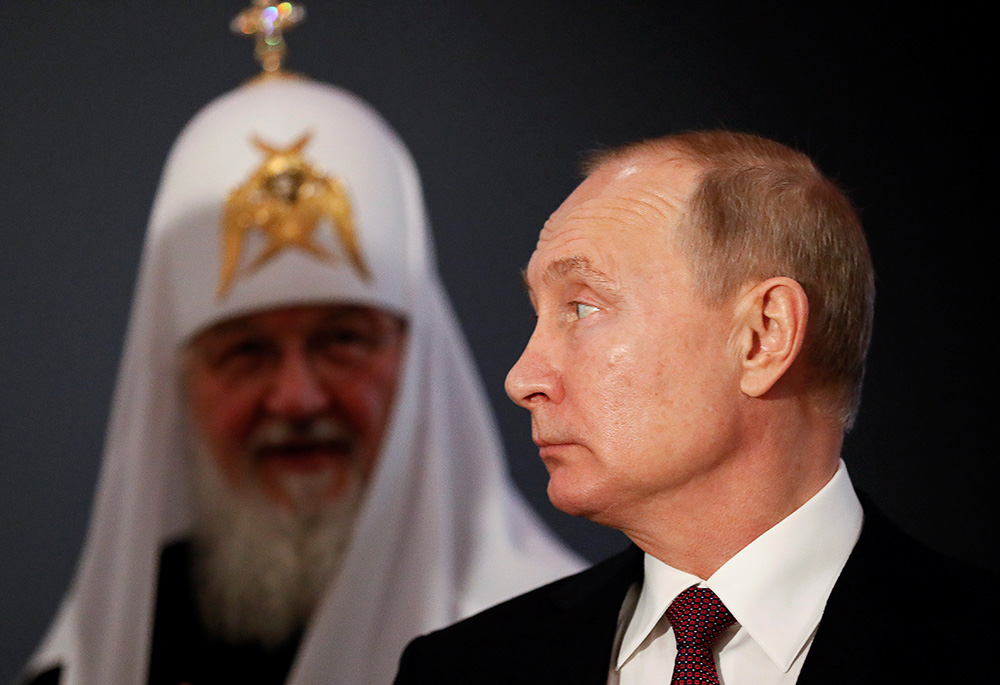 "Of course, you can talk with just about anyone, but unless Patriarch Kirill was prepared to change his line, such a meeting would make no sense," the Polish expert told NCR.

"In the future, when we speak of Orthodoxy in Eastern Europe, we'll have to speak of both Kyiv and Moscow," said Przeciszewski. "Both are equally important — and as Moscow's authority diminishes, the authority of Kyiv will grow."

Rome's attitude may already be hardening.

When Francis lamented the "rivers of blood and tears" now "flowing in Ukraine" in his March 6 Angelus message, describing the offensive as "not merely a military operation, but a war sowing death," his text was not published by the Catholic Church in Russia.

New Criminal Code amendments prescribe heavy fines and jail terms up to 15 years for "public dissemination of falsehoods about Russia's armed forces," and priests and bishops could face arrest and imprisonment if they use the words "war" and "invasion" in homilies.

The Vatican said its secretary of state, Cardinal Pietro Parolin, had urged negotiations in a telephone conversation with Russia's foreign minister, Sergey Lavrov, also repeating the Holy See's readiness "to do everything possible to assist peace."

Parolin also hit out at Kirill's March 6 sermon, saying that his inflammatory words were "of no use and do not promote understanding."

Meanwhile, a Vatican News commentary referred critically to "those who claim to call this dirty war 'a military operation,' " saying that Francis had "refuted the fake news that seeks to present what is happening with verbal subterfuge to mask the cruel reality."

In a sign of the Russian church's growing isolation, theologians from the Czech Republic to Greece have called for its expulsion from the World Council of Churches for "violating the fundamental values of Christianity," while Switzerland's University of Fribourg confirmed on March 8 it had suspended Metropolitan Hilarion Alfeyev, the Moscow Patriarchate's foreign relations director, from his theology faculty professorship.