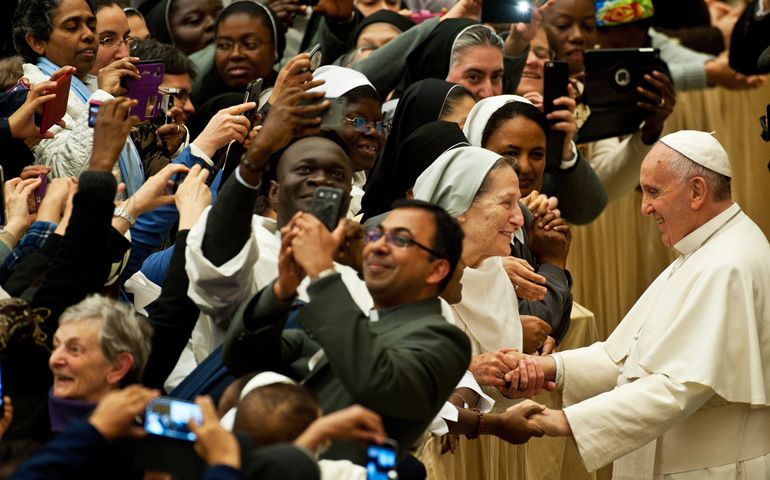 Pope Francis greets nuns and priests Saturday during a meeting with participants in an international congress organized by the Congregation for Institutes of Consecrated Life and Societies of Apostolic Life in Paul VI hall at the Vatican. (CNS/Catholic Press Photo/Massimiliano Migliorato)

Vatican City — Pope Francis has warned against allowing the lower numbers of people entering Catholic religious life to influence decisions about who is healthy and able to take lifelong vows as a priest, brother or sister.

On Saturday, the pope told a meeting of an estimated 1,200 formation directors for religious orders they must be "lovingly attentive" to those they are guiding so that "the eventual crisis of quantity does not result in a much graver crisis of quality."

"There is the discernment: to know to say no," said the pope, referring to formation directors who tell young people that religious life may not be for them.

But Francis also encouraged the directors not to "chase away" such young people.

"Like you accompany the entry, accompany also the exit, so that he or she finds their way in life, with the needed help," he said.

Francis spoke Saturday to the participants of a meeting hosted last week by the Vatican's religious congregation, one of several events the congregation is holding to mark the Year of Consecrated Life.

The conference, which had the theme "Living in Christ according to the way of life of the Gospel," saw almost a dozen presentations on various aspects of religious formation, or preparing and working with people who feel called to enter religious orders or institutes.

The number of people in Catholic orders in many parts of the world has declined in past decades. According to numbers from Georgetown University's Center for Applied Research in the Apostolate, for example, there were nearly 180,000 Catholic women religious in the U.S. in 1965 but less than 50,000 in 2014.

The Vatican has said, however, that the higher numbers of people in religious life in the U.S. in the 1960s was a historical aberration.

"The very large numbers of religious in the 1960s was a relatively short-term phenomenon that was not typical of the experience of religious life through most of the nation's history," the religious congregation wrote in its final report of the apostolic visitation of U.S. women religious in December.

On Saturday, Francis offered thanks to the religious formation directors for their work, calling it a "humble and discrete service" that involves much listening and "time devoted to the accompaniment and taking care of each of your young people."

"God has a virtue -- if you can speak of the virtue of God -- a quality of which is not spoken often: It is patience," the pope said. "He has patience. God knows to wait. You also learn this, this attitude of patience -- that many times, it is a bit of martyrdom."

"In this mission should not be spared neither time nor energy," Francis said. "And do not get discouraged when the results do not correspond to expectations."

Pope Francis said it is sad when a young person who has been considering religious life chooses another path, and "this is hard."

"But it is also your martyrdom," he continued. "And the failures, these failures from the point of view of the formation director, can foster the continuing path of formation in the director."

At the end of the meeting, Francis also asked the religious directors for prayers "so that God may give me also a bit of that virtue that he has: patience."

The pope's remarks to the group came after five days of meetings for the religious directors, at which they also worked in small-group sessions to develop and share ideas.

Speaking to the group at the opening of the meeting April 9, Cardinal João Braz de Aviz told attendees they must live their vocations "inserted" into the world, not closing themselves off to new things but open to changes of modern life.

The cardinal, who heads the Vatican religious congregation, also warned the religious against trying to abandon the changes in the church brought about by the Second Vatican Council.

"Do not distance yourself from the great lines of the Second Vatican Council," he said. "In fact, those that are distancing themselves from the council to make another path are killing themselves -- sooner or later, they will die."

The religious formation directors also released a message toward the end of their meeting on Friday, denouncing persecution of Christians around the world.

"We implore governments to implement concrete interventions to bring peace between peoples and that the spiral of violence in which so many innocent victims find themselves may be broken," reads the message signed by Braz de Aviz on behalf of all attendees at the meeting.

"We feel particularly close to those in the world who are suffering because of their faith in Jesus Christ and we express our communion with all consecrated men and women who in the various peripheries of the world suffer because they are Christian and consecrated," the religious formation directors said in the message.

"We assure them of our prayers whilst thanking them for their witness of fidelity to their vocation/mission as consecrated people and because they remain close to those who suffer," they said.

All members of the church are called to be active