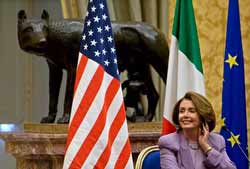 U.S. Speaker of the House Nancy Pelosi smiles during a ceremony at the Italian legislature in Rome Feb. 16. (CNS photo/Max Rossi, Reuters)

Pope Benedict XVI's much-awaited encounter this morning with U.S. Speaker of the House Nancy Pelosi, perhaps the most prominent pro-choice Catholic in America, amounted to a classic Vatican “both/and” exercise, striving to balance the demands of external diplomacy and internal church discipline.

By meeting Pelosi, Benedict signaled that he wants lines of communication to remain open with the new American leadership, even if the Vatican has deep differences with its policies on the “life issues.” The Holy See is a sovereign state with diplomatic relations with 177 states around the world, which, among other things, means the pope can’t always act like the head of a special interest group.

Yet by issuing an unusual public statement after the session with Pelosi -- which insisted that all Catholics, including legislators, are obliged to work for the defense of human life from conception to natural death -- the pope also made clear there will no let-up in the pressure on pro-choice Catholic politicians to change their ways.

While the Vatican typically puts out brief declarations after the pope meets with a head of state, encounters with lower-level officials are generally considered private. Doing so in this case thus suggests that the pope wanted to make a point.

Benedict XVI spoke briefly with Pelosi and members of her entourage at the close of his regular Wednesday General Audience this morning in Rome.

Benedict’s willingness to meet Pelosi had frustrated some pro-life Catholics in the States, who felt it was untoward for the pope to grant a “photo op” to a politician who drew a rare public rebuke from the U.S. bishops last summer after suggesting on “Meet the Press” that the church’s position on abortion has been fluid and ill-defined.

“Over over the centuries, the doctors of the church have not been able to make that definition,” Pelosi said, referring to when life begins. She said the position that life begins at conception had arisen within the last “fifty years, or something like that.”

A late August letter from Cardinal Justin Rigali, chair of the bishops’ Committee on Pro-Life Activities, and Bishop William Lori, chair of the Committee on Doctrine, bluntly asserted that Pelosi had “misrepresented the history and nature of the authentic teaching of the Catholic church against abortion.”

In the run-up to the encounter, Judy Brown, the president of the ardently pro-life American Life League, issued a statement asserting, “The only photo-op I hope to see out of Rep. Pelosi’s meeting with the Holy Father Wednesday is the House Speaker in the confessional line.”

Exacerbating this drumbeat was a rumor circulated on some pro-life web sites that Benedict would be presenting Pelosi with some sort of award – speculation that was quashed early this week by the Vatican spokesperson, Jesuit Fr. Federico Lombardi.

Facing criticism about mixed signals, the Vatican issued its statement immediately after the meeting broke up.

“His Holiness took the opportunity to speak of the requirements of the natural moral law and the church’s consistent teaching on the dignity of human life from conception to natural death,” it read, “which enjoin all Catholics, and especially legislators, jurists and those responsible for the common good of society, to work in cooperation with all men and women of good will in creating a just system of laws capable of protecting human life at all stages of its development.”

Not only was it unusual to issue a statement after a meeting with an official who’s not a head of state, routine Vatican declarations after diplomatic meetings also generally sum up the range of issues discussed rather than concentrating on a particular point.

In that sense, the statement can only be read as a rejection of Pelosi’s statements last summer, and, in general, of her argument that it’s acceptable for Catholics in public life to take a pro-choice position.

Seen through the lens of Vatican diplomacy, this combination of public welcome and after-the-fact rebuke covered all the bases. Whether it will leave activists and partisans in any camp fully satisfied, however, is another question.

Pelosi was in Rome as part of a six-day visit to Italy, meeting with various Italian officials as well as American servicemen and women. Pelosi is also reconnecting with her own roots, as her paternal grandfather was born in the Italian region of Abruzzo and her grandmother in Liguria. On Monday, the Italian Chamber of Deputies presented Pelosi with her grandparents’ birth certificates to commemorate her visit.

Yes, the pope is still Catholic, despite what you heard

The American insider in Francis' lineup