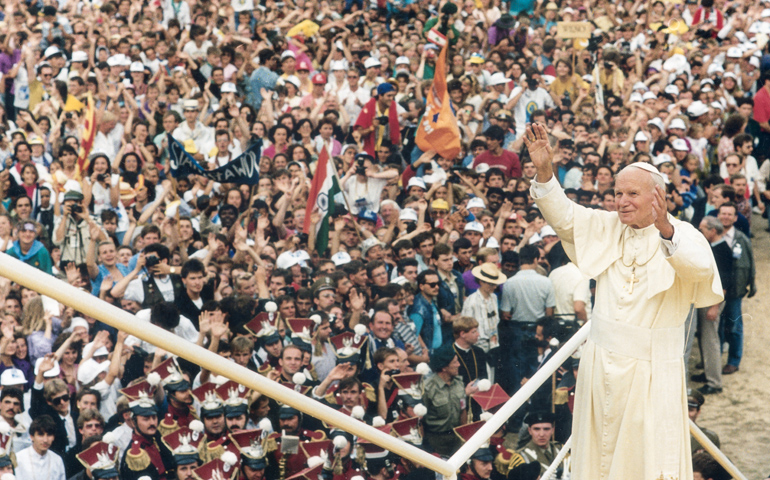 Blessed John Paul II rallied young Catholics, Pope Benedict XVI instructed them and Pope Francis is preparing to send them out on mission.

When he travels to Rio de Janeiro for World Youth Day, Pope Francis -- the former archbishop of Buenos Aires, Argentina -- will be continuing a tradition begun by Blessed John Paul in Buenos Aires in 1987, gathering Catholic youth from around the world together for several intense days of faith-building and celebration.

In cities from South America to Europe, Asia to North America and back again, each World Youth Day with the pope has been different in size and in the culture the youths experienced and shared.

But the contributions of each pope -- because of both personality and personal emphasis -- also have left striking marks on the 11 international gatherings held since 1987. With Pope Francis, that tradition of the evolving World Youth Day is bound to continue July 23-28 in Rio.

World Youth Day gatherings are so much a part of Catholic life now that it is hard to imagine just how innovative Blessed John Paul's idea first seemed. The Polish pope invited young people to his Palm Sunday celebration at the Vatican during the 1985 U.N.-proclaimed Year of Youth, and Vatican officials were shocked when approximately 250,000 young people showed up; they had planned for 60,000 pilgrims.

Blessed John Paul brought Catholic teens and young adults out of the parish religious education and youth ministry programs that parents often had to force their children to attend. For him, the youths were not just the future of the church, but the embodiment of its energy and enthusiasm.

When convoked and affirmed, Blessed John Paul thought, young people could rejuvenate the whole church. Their energy certainly worked on him. One of the iconic photographs from World Youth Day 1995 in Manila shows the pope twirling the cane he relied on after breaking his leg and undergoing hip replacement surgery eight months earlier.

At his last World Youth Day, the 2002 celebration in Toronto, a frail 82-year-old Pope John Paul described himself as "old," but looked and sounded better than he had in months, demonstrating once again his special chemistry with young people. He even read his speeches in their entirety, rather than having an aide read most of the text.

The Toronto event took place less than a year after the Sept. 11, 2001, terrorist attacks in the United States and Pope John Paul refused to ignore it.

"Last year, we saw with dramatic clarity the tragic face of human malice. We saw what happens when hatred, sin and death take command," the pope said. "Too many lives begin and end without joy, without hope. That is one of the principal reasons for World Youth Day. Young people are coming together to commit themselves, in the strength of their faith in Jesus Christ, to the great cause of peace and human solidarity."

"The future," he told them, "is in your hearts and in your hands."

The German Pope Benedict inherited from Blessed John Paul the 2005 celebration of World Youth Day in Cologne and brought to the encounters a sense of the seriousness of the Christian call. His love for the young Catholics translated into trust that they not only could understand the core teachings and traditions of the church, but that they wanted to learn more about them.

Under Pope Benedict, the evening vigil was transformed from a rally into a mass moment of eucharistic adoration, surprisingly silent and devout, given the fact that it involved tens of thousands of young people on their knees in the dirt on a wide open field.

At World Youth Day in Sydney in 2008, Pope Benedict emphasized the importance -- and real possibility -- of living a holy life by following the faith taught by the church and being open to the gifts of the Holy Spirit.

World Youth Day in Madrid in 2011 ended up being dramatic when sweltering heat gave way to a storm -- complete with thunder, wind and rain -- that knocked out the power at the traditional Saturday night vigil. Pope Benedict refused to leave.

"The Lord loves you and calls you his friends," he told the young people at Mass the next morning.

Their response, he said, must be to accept that love and share it with their peers who know, deep down, that "authentic values do exist" and will lead to a life of joy.

Pope Francis inherited WYD Rio from Pope Benedict, who chose the theme: "Go and make disciples of all nations." It's a theme that's right up Pope Francis' alley.

With the young people, he's likely to use the word he's repeated most in his morning homilies and his meetings with Catholic groups; his Italian "Avanti!" is likely to resound in Spanish ("Adelante!"), Portuguese ("Adiante!") and English ("Go forth!").

For Pope Francis, going forth literally requires motion. It's about leaving the comfort of one's group or parish and sharing the Gospel both through serving the poor and wounded and through proclaiming faith in Jesus with words, smiles and embraces.

Meeting with seminarians and novices July 6, the pope said: "Be courageous in prayer and in going out to proclaim the Gospel. I'd like a more missionary church, not one that seeks tranquility" above all; "a beautiful church that goes forth."

Even the eucharistic adoration that Pope Francis practices regularly and will share with the young people in Rio has a deep dimension of outreach.

As he said in June on the feast of the Body and Blood of the Lord, "in adoring Christ who is really present in the Eucharist," Catholics should ask themselves: "Do I let myself be transformed by him? Do I let the Lord who gives himself to me guide me to going out ever more from my little enclosure in order to give, to share, to love him and others?"