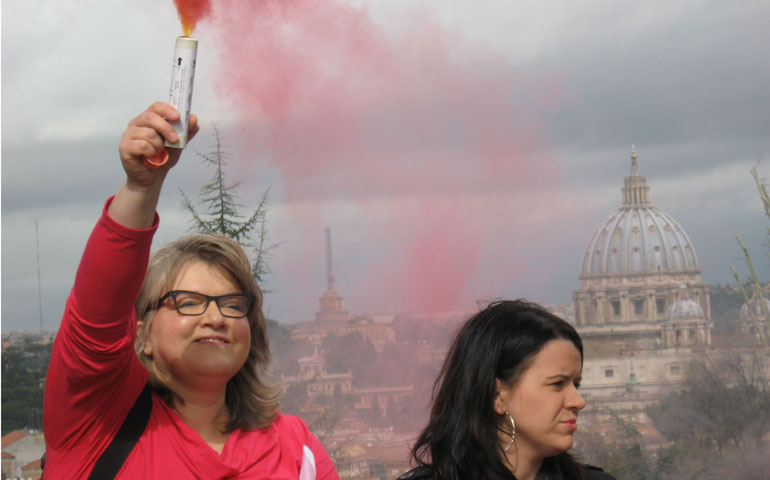 As observers throughout the church wait to see how Pope Francis will handle issues of substance, some are looking particularly at what openness he'll show to the participation of women in church leadership.

Yes, even for women as deacons and priests.

Just five hours before Cardinal Jorge Mario Bergoglio's election to the papacy March 13, women from the U.S., Canada, Australia and Europe gathered in a downtown Roman schoolroom for the celebration of Mass by the Rev. Janice Sevre-Duszynska, an ordained minister of the Association of Roman Catholic Women Priests.

A day earlier, dozens of women had raised flares of pink smoke at a piazza about a 10-minute drive away from the Vatican to promote their case for the ordination of women to the priesthood.

Both demonstrations were small compared to the hundreds of thousands who thronged St. Peter's Square to welcome the newly elected 76-year-old Francis. But the demonstrations drew considerable media attention from a number of international news agencies.

Sevre-Duszynska's Mass was held at the headquarters of the Comunità Cristiana di Base di San Paolo, a spartan facility that has long been the home of a Roman Christian base community first housed at the ornate Basilica of St. Paul Outside the Walls.

The liturgy focused on gender justice in the Catholic church with a theme of "Let Justice Rise Up."

Using a school desk as an altar, Sevre-Duszynska gave voice to her belief that women will be given official sanction to preside at altars worldwide, including those at St. Peter's Basilica in the Vatican.

"Women priests are here," she said, presiding in a white chasuble and multicolored stole.

"Are the men of the Vatican so un-free that they choose to ignore the movement of the spirit of the people of God?" she asked. "How can the church speak about justice when the hierarchy does not practice what it preaches?

"We say to our brothers, 'Open not only the windows ... as in Vatican II, open the doors of the conclave. Let the people of God in.' "

The March 12 vigil at Rome's Piazza Garibaldi was held in pelting rain interspersed with thunder and lightning. Between the rain showers, the women lit large road flares and held them aloft, the color of the emission a light pink instead of the normal red.

Erin Saiz Hanna, executive director of the Women's Ordination Conference, a U.S.-based organization that has been working for the ordination of women since 1975, said she would like an official reopening of the discussion on women's ordination.

"During his papacy, Pope Benedict [XVI] used his power to take significant steps backward for women," Saiz Hanna said. "The current old boys' club has left our church reeling from scandal, abuse, sexism and oppression. The newly elected pope will have a profound opportunity to offer healing to our broken church."

"As the pink smoke rises, so too will the voices of faithful Catholics who call for a justice-seeking pope," she continued. "The people of the church are desperate for a leader who will be open to dialogue and embrace the gifts of women's wisdom in every level of church governance."

[John Cooney, a Dublin-based journalist and historian, was in Rome for the election of Pope Francis.]

A version of this story appeared in the April12-25, 2013 print issue under the headline: Embrace women’s gifts, protesters say.