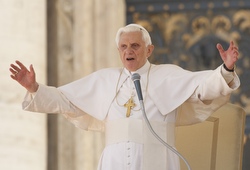 The future Pope Benedict XVI knew more about a sexual abuse case in Germany than previously reported, raising new questions about his involvement in the matter, according to a report in The New York Times.

Cardinal Joseph Ratzinger, the future pope and archbishop in Munich at the time, was copied on a memo that informed him that a priest, whom he had approved sending to therapy in 1980 to overcome pedophilia, would be returned to pastoral work within days of beginning psychiatric treatment. The priest was later convicted of molesting boys in another parish, The Times reported in its March 26th issue.

The Archdiocese of Munich and Freising earlier had placed full responsibility for the decision to allow the priest to resume his duties on the cardinal’s deputy, Fr. Gerhard Gruber. But a memo, whose existence, the Times reported, was confirmed by two church officials, shows that the future pope not only led a meeting on Jan. 15, 1980, approving the transfer of the priest, but was also kept informed about the priest’s reassignment.

What part the future pope played in the decision making, and how much interest he showed in the case of the troubled priest, who had molested multiple boys in his previous job, was not clear from the report. But the personnel chief who handled the matter from the beginning, Fr. Friedrich Fahr, “always remained personally, exceptionally connected” to Cardinal Ratzinger, the church said, according to the report.

The case of the German priest, Fr. Peter Hullermann, has acquired new relevance because it took place at a time when Ratzinger was in a position to refer the priest for prosecution, or at least to stop him from coming into contact with children, the newspaper report stated. The German Archdiocese has acknowledged that “bad mistakes” were made in the handling of Hullermann, though it attributed those mistakes to people reporting to Ratzinger and not the cardinal himself.

Church officials in Munich defended Benedict’s role in the matter, saying the memo was routine and was “unlikely to have landed on the archbishop’s desk,” according to the Fr. Lorenz Wolf, judicial vicar at the Munich Archdiocese, the Times reported. But Wolf said he could not rule out that Ratzinger had read it.

Gruber, who in an interview with the Associated Press last week, took full responsibility for allowing Hullermann to enter parish work has since not been available for any further comments. The Times, however, reported that Wolf spoke with Gruber this week at the newspaper’s request and that Gruber, the former vicar general in Munich, said that he could not remember a detailed conversation with Ratzinger about Hullermann. Gruber told Wolf he refused to rule out that “the name had come up.”

The Times reported it had reviewed “letters, meeting minutes and documents from personnel files” and these show Hullermann “went from disgrace and suspension from his duties in Essen to working without restrictions as a priest in Munich” in a matter of weeks despite the fact that in a letter requesting his transfer he was described as a potential danger.

According to the Times report, a key moment in the transfer of Hullermann came on Tuesday, Jan. 15, 1980. Ratzinger presided that morning over the meeting of the diocesan council. His auxiliary bishops and department heads gathered in a conference room on the top floor of the bishop’s administrative offices in Munich. The Hullermann matter was on the agenda.

The minutes of the meeting include no references to the actual discussion that day, simply stating that a priest from Essen in need of psychiatric treatment required room and board in a Munich congregation. “The request is granted,” read the minutes, the Times reported, stipulating that Hullermann would live at St. John the Baptist Church in the northern part of the city.

Five days later, on Jan. 20, Ratzinger’s office received a copy of the memo from his vicar general, Gruber, returning Hullermann to full duties, a spokesman for the archdiocese confirmed, the Times reported.

Father Hullermann resumed parish work practically on arrival in Munich, on Feb. 1, 1980. He was convicted in 1986 of molesting boys at another Bavarian parish.