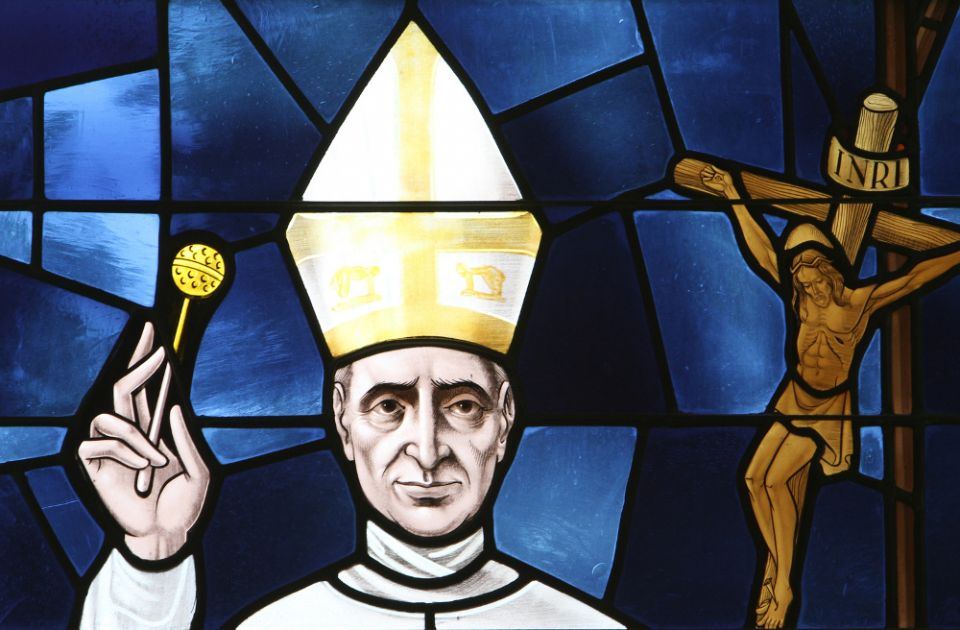 Pope Paul VI is depicted in a stained-glass window at St. Anthony of Padua Church in East Northport, N.Y. (CNS/Gregory A. Shemitz)

Vatican City — Thirteen years before his death, Blessed Paul VI had written to the dean of the College of Cardinals to say that if he were to become seriously ill or impeded from exercising his ministry, the dean and other top cardinals in Rome should accept his resignation.

Commenting on the letter, Pope Francis said, "We must thank God, who alone guides and saves the church, for having allowed Paul VI to continue until the last day of his life to be father, pastor, master, brother and friend."

The text of Blessed Paul's letter and Pope Francis' brief commentary are included in a new Italian book, "The Barque of Paul," by Msgr. Leonardo Sapienza, regent of the Prefecture of the Pontifical Household. The letter and commentary also were published May 15 in the Vatican newspaper, L'Osservatore Romano.

Blessed Paul's letter was long rumored to exist, and in 2017 Cardinal Giovanni Battista Re, the vice dean of the College of Cardinals, confirmed that the pope had written such a letter. But it was not made public until Sapienza's book came out.

The letter was dated May 2, 1965, and was addressed to the dean of the College of Cardinals, at that time French Cardinal Eugene Tisserant. Sapienza also published a note from Paul to Italian Cardinal Amleto Cicognani, then secretary of state, informing him of the letter and giving him permission to read it.

Paul said he was writing "aware of our responsibility before God and with a heart full of reverence and of charity, which unite us to the holy Catholic Church, and not unmindful of our evangelical mission to the world."

"In case of infirmity, which is believed to be incurable or is of long duration and which impedes us from sufficiently exercising the functions of our apostolic ministry; or in the case of another serious and prolonged impediment," Paul wrote, he renounced his office "both as bishop of Rome as well as head of the same holy Catholic Church."

In the letter, Paul formally gave authority to the dean of the College of Cardinals acting together with, at the very least, the cardinals heading offices of the Roman Curia and the cardinal vicar for the Diocese of Rome "to accept and render effective" his resignation for the good of the church.

Commenting on the letter, Pope Francis said it filled him with "awe" for Paul's "humble and prophetic witness of love for Christ and his church."

"In the face of the tremendous mission entrusted to him, in the face of protests and a society undergoing vertiginous change, Paul VI did not withdraw from his responsibilities," Pope Francis wrote. "What was important to him were the needs of the church and the world. And a pope impeded by serious illness could not exercise the apostolic ministry with sufficient effectiveness."

Church law states that a pope can resign, but it stipulates that the papal resignation must be "made freely and properly manifested" — conditions that would be difficult to ascertain if a pope were already incapacitated. Pope Benedict XVI's situation was different.

At a gathering of cardinals in 2013, solemnly and in Latin, Pope Benedict said: "Well aware of the seriousness of this act, with full freedom I declare that I renounce the ministry of bishop of Rome, successor of St. Peter, entrusted to me by the cardinals on 19 April 2005, in such a way, that as from 28 February 2013, at 20:00 hours, the see of Rome, the see of St. Peter, will be vacant and a conclave to elect the new supreme pontiff will have to be convoked by those whose competence it is."

St. John Paul II was long rumored to have written a letter similar to that of Paul's. And in 2010, Msgr. Slawomir Oder, coordinator of the Polish pope's sainthood cause, released a book publishing for the first time letters Pope John Paul prepared in 1989 and in 1994 offering the College of Cardinals his resignation in case of an incurable disease or other condition that would prevent him from fulfilling his ministry.

But even a month before St. John Paul's death in April 2005, canon law experts in Rome and elsewhere were saying the problem with such a letter is that someone else would have to decide when to pull it out of the drawer and apply it.