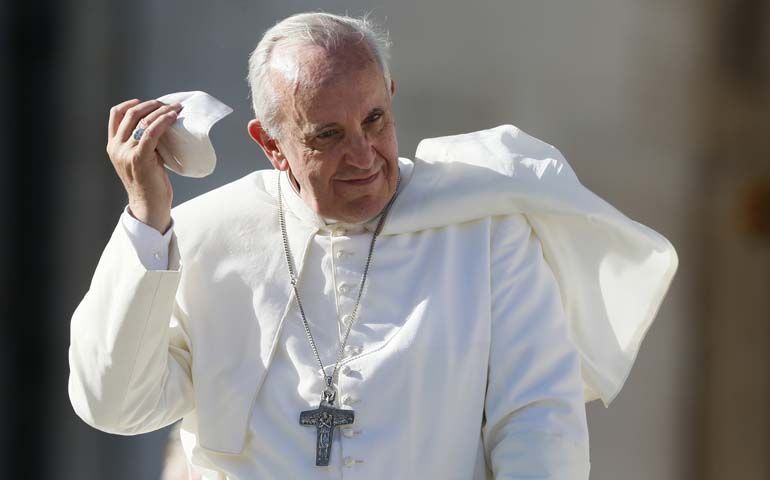 Pope Francis takes off his zucchetto as he leaves his general audience in St. Peter's Square at the Vatican Nov. 6. (CNS/Paul Haring)

Dublin — The retired head of the Vatican's doctrinal congregation said some media portrayals of Pope Francis risk making him appear as a sign of division in the church.

U.S. Cardinal William Levada, who, as head of the Congregation for the Doctrine of the Faith from 2005 to 2012, served as retired Pope Benedict's chief adviser on matters of faith and morals, also said the German pontiff's decision to resign made it easier for future popes to do so.

Speaking to The Irish Catholic newspaper during a visit to Dublin, Levada said, "I think there is a tendency -- maybe it's natural, although, sometimes I think it's either mistaken or malicious or something in between -- but there's a tendency to look at everything he (Pope Francis) does in contrast to Pope Benedict XVI or Pope John Paul II or both, and try to make a story out of that.

"Pope Francis does not meditate on trying to be different -- he is himself," Levada said.

Levada warned that "this, ultimately, makes the pope less a sign of unity and a sign of division, which he is not."

He said he is impressed by Pope Francis' "reminders to the church and the world about the poor, people who are easily forgotten or put aside out of our mind and vision."

On the decision of Pope Benedict to resign, Levada said he believes that was "a giant step in regard to the future of the church and the future of the papacy, so that this particular question can be resolved by any future pope because of what he (Benedict) has done."

As head of the doctrinal congregation, Levada was responsible for dealing with cases of sexual abuse by priests and religious against minors. He described the role of Popes John Paul II and Benedict XVI as "decisive in helping us to meet the challenge."

"We found that, far from a Vatican cover-up, it was the forward-looking and cooperative work of the Vatican that helped the church in Ireland, the United States and other places," the cardinal said.

"We think that the work we do is helpful and useful, but we're always ready to say if we could've done better, we'll learn and do better next time," he said.

The cardinal said he believed many critics of the doctrinal congregation "are essentially critics of the faith, of Jesus, of God. I'm not trying to overstate the case, but I think we represent a challenge to a highly secularized mentality. We do our best to explain things with good reasons and take advantage of opportunities to publicize teachings," he said.

He described ensuring doctrinal orthodoxy as a work of "fraternal correction."

"They have a responsibility, otherwise they use their role to produce confusion, and people may hear them preaching from the pulpit or read what they write about something that's contrary to the faith," the cardinal said.

The California native was in Ireland to address a conference on adult faith formation in the light of the upcoming 20th anniversary of the Catechism of the Catholic Church. He said he has been disappointed that some people have been unwilling to embrace the catechism.

"There are still people in the church who say, 'Don't give that to me, or my people, it's too much for them.' I think they short-change people's educational level, and the hunger they have to be better educated in their faith, as many of them are educated in their work."

He said the new evangelization "depends on well-educated Catholics."

"Adult faith formation is the key to the new evangelization," he said. "People are not going to be able to evangelize confidently if they do not know their faith."

Vatican condemns leak of documents on differences over economic reform