Synod for Africa opens to high hopes, but realism 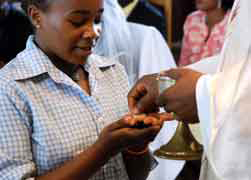 On Sunday morning, Pope Benedict XVI will celebrate the opening Mass of the Synod for Africa, which meets in the Vatican Oct. 4-25. It's one of those events in the life of the church which ought to be enormously important, though whether it will actually live up to its potential remains to be seen.

I'm in Rome to cover the synod. I'll be posting regular reports on the NCR Today blog, and will try to offer a more analytical perspective in this column. This is the second Synod for Africa; the first met in 1994, on the cusp of the Rwandan genocide.

As I typically say when a synod rolls around, there are two views of their value, which we might call the "glass half full" and "glass half empty" perspectives.

The latter is far easier to state: That a synod is an expensive talk shop that typically accomplishes very little. Indeed, they're almost systematically designed to ensure that the most interesting or novel ideas are either ground out by the end, or phrased merely as things to ponder rather than action items. Given the expectation that any actual proposals should enjoy a broad consensus, synods typically end up affirming existing practice and then calling for further study about most everything else.

On the other hand, the "glass half full" view holds that a synod is of greatest value for the ideas and energy it unleashes, quite apart, in some cases, from its formal conclusions. (In fact, those ideas sometimes surface around, rather than directly in, the synod hall.) It's a chance to start conversations and to put ideas on the table, not just in a local setting but for a cross-section of the universal church. It's also a month-long seminar in the diversity of global Catholicism, as participants from various parts of the world have the chance to share experiences, get to know one another, and learn from each other. Even those paying attention from afar can benefit.

In that sense, waiting for the final statements and propositions from a synod is almost exactly the wrong way to follow it. Instead, it's important to watch the conversations in their early stages, before the polishing and refining stage kicks in and the most provocative or original bits are excised.

Do that, and in most cases you'll find plenty to chew on.

The spectacular growth of Catholicism in Africa, coupled with the youthful and dynamic feel of the faith there, have generated much talk that "Africa is the future." High hopes for this month's synod, as well as realism about the challenges it faces, can be glimpsed from the pre-synod reflections circulating in Africa and among Africans.

On Thursday, I attended a workshop on the synod sponsored by Pax Romana, an international Catholic movement for intellectual and cultural affairs, convened in the Casa Ravasco, a residence near the Vatican, in order to make recommendations to the bishops. The workshop studied matters such as alternative models of economic development (trying to encourage Africans to take advantage of competitive local advantages to increase productivity and the market value of their products), as well as possibilities for conflict resolution and peace-building.

Dominican Fr. Emmanuel Ntakarutimana of Burundi made the following sobering observation: In terms of percentages of population, the four most heavily Christian nations in Africa are Burundi, Rwanda, the Democratic Republic of the Congo and Congo-Brazaville. They also, of course, are the four nations which have seen the most appalling carnage in the last decade and a half, including the Rwandan genocide and the vast war in the Great Lakes region centered on Congo -- each of which have left millions dead and generated tens of millions of refugees.

Indeed, Ntakarutimana said that he could testify from personal experience in Burundi that when violence erupted there, the casualties were lowest in Muslim-dominated areas. Put in its most shocking form, here's his conclusion: The more Christian an African nation is, the higher the odds of being slaughtered there.

Obviously, Ntakarutimana said, this raises the troubling question of what kind of evangelization has taken place among Christians in these nations, and what needs to change to ensure that such conflicts don't repeat themselves. Among other things, Ntakarutimana recommended a serious investment in institutes of peace-building which could analyze conflicts and train experts, both clergy and laity, in resolving them. (Ntakarutimana added that models for such institutes exist in the United States and Europe, but too often, he said, these institutes want Africans to study on their campuses rather than investing in building similar facilities in Africa itself, closer to the local realities.)

In general, Ntakarutimana recommended that the Catholic church focus on what he called "social therapy and the healing of memory," rethinking the nature of Christian identity to emphasize being "a family centered on the Eucharist."

The Pax Romana event is not the only forum in which reflections on the synod are making the rounds.

Society of African Missions Fr. Patrick Devine, chair of the Religious Superiors Conference in Kenya, recently issued a statement on the synod, highlighting its theme of reconciliation. While not discounting the importance of large-scale regional wars, Devine also accented smaller inter-ethnic conflicts fueled by matters such as "scarcity of environmental resources, cultural variation, state neglect, contested use of territory and the proliferation of small arms."

Those conflicts, Devine argued, often make the church's catechetical programs, schools, hospitals and other ministries "inoperable." An approach to evangelization in Africa that doesn't include serious training in peace-making, he wrote, would represent "a fundamental flaw in the approach and vision of the church's mission."

Holy Child of Jesus Sr. Teresa Okure, a Nigerian who serves as academic dean of the Catholic Institute of West Africa, has expressed hope that the synod will address the role of women -- both in African societies and in the church itself.

"The marginalization of religious and women generally, or giving them token acknowledgment here and there, is simply a sin, if our equality and oneness in Christ through baptism is anything to go by," Okure wrote. "The practice distorts the image of God in woman, denies woman her baptismal right and new status in Christ, and greatly impoverishes not only the woman but the entire human community be belittling, killing and suppressing the God-given talents of women."

Okure, among the synod experts appointed by the pope, counsels that church leaders must "teach by example rather than by precept." Among other things, she recommends taking up a suggestion from the first African Synod in 1994 to set up a women's commission "to critically study how to integrate women in the church's mission."

Okure also invited African religious to reflect on how they can better model reconciliation within their own communities.

"In some cases, superiors live a different life-style, have a different menu from other members of the community," she wrote. "The initiative of young sisters is often crushed under the guise of enforcing the vow of obedience … At times, people running for office in the congregations bribe members with all kinds of promises, including sending them for further studies if elected."

In effect, Okure suggested, the synod ought to be an occasion for curbing such abuses.

The Association of Member Episcopal Conferences of Eastern Africa (AMECEA) issued a statement ticking off a host of challenges for the synod to tackle, including:

The Eastern African bishops then present four expectations for the synod:

Of course, it's far from a slam-dunk that the synod will actually meet all these expectations. This may be what retired Archbishop Peter Sarpong of Ghana had in mind when he recently said, "The risk is that the second African synod could turn out to be exactly like the previous one: an occasion to repeat big truths about the church, but without suggesting practical applications."

The Ugandan Catholic magazine Leadership recently offered a similarly skeptical view of what the synod might accomplish, saying that "Our problem is not the lack of solutions, but the will to effectively disseminate and implement findings." The African Theological Review recently argued that a second Synod for Africa may be premature, since the results of the first are not yet widely known or effectively implemented.

For all that, some observers nevertheless remain hopeful that the assembly may generate some helpful new energy. Jesuit Fr. Peter Henriot, who directs the Jesuit Centre for Theological Reflection in Zambia, recently argued that the synod's theme of reconciliation is "very relevant," not just for Zambia but for "all African countries."

If nothing else, the table at least appears to be set for three weeks of fascinating conversation. As he has in the past, Pope Benedict XVI is expected to attend many of the synod's daily sessions, and will likely make some remarks of his own at roughly the mid-way point.

One footnote: On Oct. 8, the Pontifical Council for Promoting Christian Unity, together with the German embassy to the Holy See, will co-sponsor a concert marking the 70th anniversary of the Second World War, titled "Youth against War." Pope Benedict XVI will attend the concert, featuring pieces by Mendelssohn and Mahler.

A number of Jewish groups, many based in the United States, have also agreed to co-sponsor the concert and are expected to send representatives.

Cardinal Walter Kasper presented the event in a Vatican news conference on Friday, and I asked him whether he thought it has any relevance to the Synod for Africa.

"We wanted to insert this event in the context of the synod," Kasper said, adding that the pope thought it was "very important." The experience of Europe in overcoming its own history, Kasper said, could offer "a sign, an example," for Africa today.

In its own way, Kasper suggested, World War II was an ethnic and tribal conflict, not entirely dissimilar to many African wars. Noting that he was born in 1933, Kasper said that growing up in German schools, "we were taught that the French were our eternal enemies." Now, he said, any such claim only "makes us laugh."

"Europe today is a sphere of peace, and that can be a sign for Africa that conflicts can be overcome," Kasper said.

Kasper added that the participants in the synod have been invited to attend the concert, and that they eagerly accepted.

"It will be something fun, since a synod tends to be awfully heavy," he said.

Vatican | Synod for Africa opens to high hopes, but realism