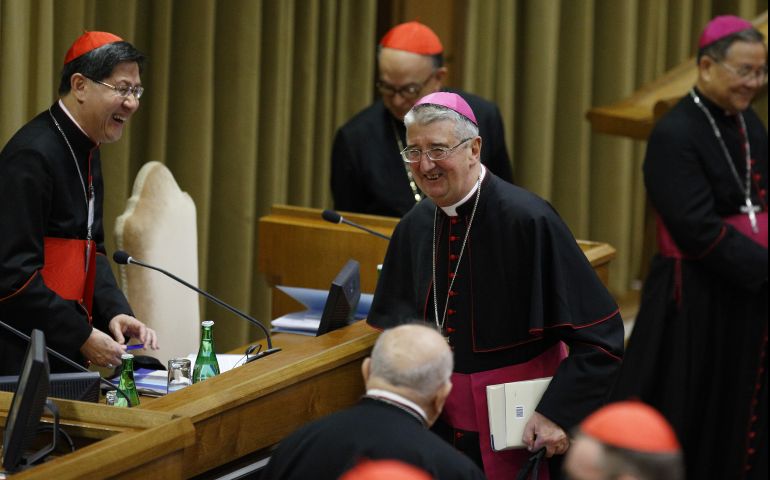 Irish Archbishop Diarmuid Martin of Dublin, center, shares a laugh with Cardinal Luis Antonio Tagle of Manila, Philippines, before the morning session of the extraordinary Synod of Bishops on the family at the Vatican Oct. 9. (CNS/Paul Haring)
This article appears in the Family Synod 2015 feature series. View the full series.

Vatican City — Catholic prelates attending the worldwide meeting of bishops on family have expressed confusion over what is expected from them in their deliberations, writing in their first public reports from the gathering that they do not understand how their discussions will be used by Catholics around the globe.

They also seem to have fairly stark differences of opinion regarding how the church should approach families, particularly over whether Catholic leaders should adopt a stance of criticism towards modern lifestyles or of praise for their positive aspects and even commonalities with certain church teachings.

Participants of the ongoing Synod of Bishops made their observations Friday with a release of reports from 13 different small discussion groups that have been meeting Tuesday through Thursday. The groups are organized by language preference and are split into circles of French, English, Italian, Spanish and German.

Where Martin’s group, for example, speaks of a need to “read the signs of the times” in the church’s outreach to families, Collins’ group obliquely says there is a need to point out sinful behavior of current attitudes and lifestyles.

But each of the groups also expresses particular confusion about not knowing exactly what their work will be used for, and whether they are meant to create a document for public distribution or just to give advice to Pope Francis, who will then write his own document based on their counsel.

“Are we writing to the Holy Father, to families of the Church, or to the world?” asked Collins’ group, in one example.

Philippine Cardinal Luis Antonio Tagle defended the process of the work and the role of confusion shortly after the release of groups’ reports at a press briefing Friday. Tagle said a new method of discussion was being tried at this Synod, and that “definitely it has caused … a bit of confusion.”

“But it's good to be confused once in a while,” said the cardinal, laughing. “If things are always clear, then we might not be in real life anymore.”

The Philippine cardinal also said that it is unknown whether the Synod will create its own final document, or simply provide some sort of advice to Francis. In each of the Synods held since 1974, the bishops at the gathering have only provided advice to the pontiff of the time, who then wrote an official letter known as an apostolic exhortation.

Tagle said that might not be the case this time, and the 2015 Synod may take the direction of the Synod held in 1971, which wrote the landmark document Justice in the World.

"We just want to remind everyone based on history that the first synods called by Pope Paul VI did not end with a papal … apostolic exhortation," said the cardinal.

"I guess it is not mandatory," he said, adding that the practice of a Synod writing its own document "has been tried already in the past -- well, it could happen again."

In that light, the 13 reports released Friday from the Synod's various small groups may indicate what direction such a final document could take. As part of their task, the small groups were reflecting on an initial working document for the Synod, known as an Instrumentum Laboris.

Among the English circles, the most negative take on the working document came from Collins' group. U.S. Archbishop Charles Chaput serves as that group's relator, or secretary.

That group said that in the working document they "found much of the text to be flawed or inadequate, especially in its theology, clarity, trust in the power of grace, its use of Scripture and its tendency to see the world through overwhelmingly Western eyes."

The group also wrote that the Synod might consider adopting a certain style of St. Paul, whom they said "would often write a prologue of praise to people whose sins he would then critique."

"This was a common style in his epistles, and effective," they state.

Making their point clearer, the group states: "Overall, members felt that Pope Francis and the people of the Church deserve a better text, one in which ideas are not lost in the confusion."

Martin's group also took something of a negative tone towards the working document, but focused its critique more on the fact that the document uses too much so-called "churchspeak." Australian Archbishop Mark Coleridge serves as that group's relator.

"We also considered certain phrases which have become commonplace in Church documents, among them 'the Gospel of the family' and 'the domestic Church,' " wrote that group. "These were vivid and illuminating formulations when they first appeared, but in the meantime they have become clichés, which are less clear in their meaning than they are usually assumed to be."

"We felt that it may be a good thing if they were given a rest and if we chose instead to use a language which was more accessible to those unfamiliar with our particular speak," they wrote.

"Like Vatican II, this Synod needs to be a language-event, which is more than cosmetic," they stated. "We need to speak of marriage and the family in new ways, which has implications on both the macro and micro level, as it does on both the local and universal level."

Martin's group also called for "a less negative reading of history, culture and the situation of the family at this time."

"To see and speak positively of things is not to indulge in a kind of denial," they state. "It is rather to see with the eye of God, the God who still looks on all that he has created and still finds it good."

That group also says they were conscious of a "danger of lapsing into an idealized, removed and disembodied sense of family, which may have its own beauty and internal coherence but which can end up inhabiting a somewhat bloodless world rather that the real world of families in all their variety and complexity."

"In considering marriage and the family here and now, we were conscious of the need to address the facts of history and the realities of cultures -- with both the eyes of faith and the heart of God," they state. "That is what it has meant for us to read the signs of the times."

Nichols' group -- where Irish Archbishop Diarmuid Martin serves as relator -- also wrote of the need for "a more simple language, accessible to families" in the Synod's final document.

That group also said that the church "should ... openly recognize the inadequacy of the pastoral support that families receive from the Church on their itinerary of faith."

Pell's group -- where U.S. Archbishop Joseph Kurtz serves as relator -- states that it sought to speak less of "crisis" in family life today and more of "lights and shadows." It called on the Synod to "hold up the strengths and seeds of renewal already present so families might be active agents of the Good News of Jesus."

The Synod continues meeting Friday afternoon and Saturday in open session, where prelates are given three minutes to address the entire gathering. The group will take Sunday off before reconvening in their small circles on Monday and Tuesday.

Kurtz, president of the U.S. bishops' conference, also spoke at the briefing Friday. He said he believed the small group discussions were part of a "healthy process" to allow the bishops to listen to various voices.

Tagle said that one idea he had heard presented in the small groups was that because there might be certain issues the whole Synod cannot agree on, those issues might be handled by local bishops' conferences.

“While there is the unity of the church -- one faith, one doctrine -- the situations differ," said the Philippine cardinal. "And so there was a serious proposal to see what space could be given to the episcopal conferences to address issues, concerns that are somehow peculiar to them, but always in the light of the common faith."

“How that will be worked out at this stage has not been proposed yet," he said.

True defenders of doctrine uphold spirit, not letter of the law

Church and society must learn from families, pope says at audience