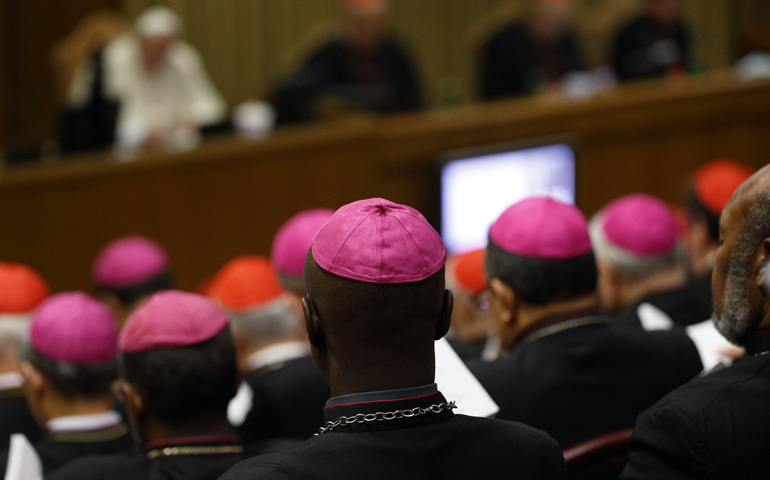 Bishops and cardinals attend the morning session of the extraordinary Synod of Bishops on the family Monday at the Vatican. (CNS/Paul Haring)

A Spanish cardinal has defended the landmark document released Monday by the Synod of Bishops on the family, saying it was an "unbiased summary" of the prelates' discussions to that point.

The document, said Barcelona Cardinal Lluís Martínez Sistach, is a collection of what was said in some 300 talks during the first week of the Oct. 5-19 meeting.

"It is far from being complete, but it is an unbiased summary," Martínez said Wednesday at a Vatican press conference.

The cardinal's comments come as some prelates have begun to criticize the document. On Tuesday, South African Cardinal Wilfrid Napier said its message of openness to modern society has put the prelates in "a position that is virtually irredeemable."

Answering a question Wednesday about how he sees the reaction of some Catholics who disagree with points in the synod document, Martínez said repeatedly that the document was not a final decree but a "working document" that the synod members are still revising.

"It is not a final document, I insist on this," he said. But, he continued: "We must all convert ourselves, and conversion is a painful experience. All the faithful must continue to follow the will of God through conversion."

Monday's document, which calls for the church to listen more and to apply mercy much more widely, was released as a summary of the synod's discussions so far and is known officially as a relatio post disceptationem.

The document was created after the some 190 prelates attending the synod meet last week in general assemblies. This week, the prelates are meeting in small working groups, divided by different languages, to revise Monday's document. Those revisions are to be presented to the whole synod Thursday, in view of drafting a final document for the synod for submission to Pope Francis by Sunday.

Unlike previous synods, the Vatican is not releasing the texts of the speeches made by the prelates in their general assemblies. Instead of releasing texts, the Vatican is providing daily briefings with three spokesmen attending the synod and summarizing events: official Vatican spokesman Jesuit Fr. Federico Lombardi, in Italian; Chicago archdiocesan Fr. Manuel Dorantes, in Spanish; and Basilian Fr. Thomas Rosica, in English.

Kurtz, who is the head of the archdiocese of Louisville, Ky., and is attending the synod as the U.S. bishops' president, said his small group mainly wanted to make three adjustments to Monday's document.

That group, Kurtz said, wants to add passages to "highlight the importance of the witness of sacrificial love"; to "make sure that all of our words are truly welcoming and come truly from the heart"; and "to locate clearly our pastoral avenues ... as being located within the beauty of sacred Scripture and church teaching."

Kurtz also said that he and his group wanted to call attention to what the document called a "missionary conversion."

That conversion, Kurtz said, means to "go to where people are and accompany them, and I think that's what Pope Francis is saying so strongly to us."

But Kurtz also downplayed the importance of Monday's document a bit, saying he was looking to see what the final document, to be voted on by the synod on Saturday, would say.

Asked if certain groups lobbying the synod were having undue influence on the prelates' discussions, Martínez said Wednesday that they "seek to listen to the Lord and not the interests of particular groups."

"It is true we have different opinions, but this diversity may shed light on the needs of the church today," said Martínez, who was one of 26 prelates personally appointed by Francis to participate in the synod.

"I do not believe that we have had a certain influence in particular," he continued.

The synod's final document is expected to be released to the public and to be used as the blueprint of sorts for the next synod, to be held in 2015.