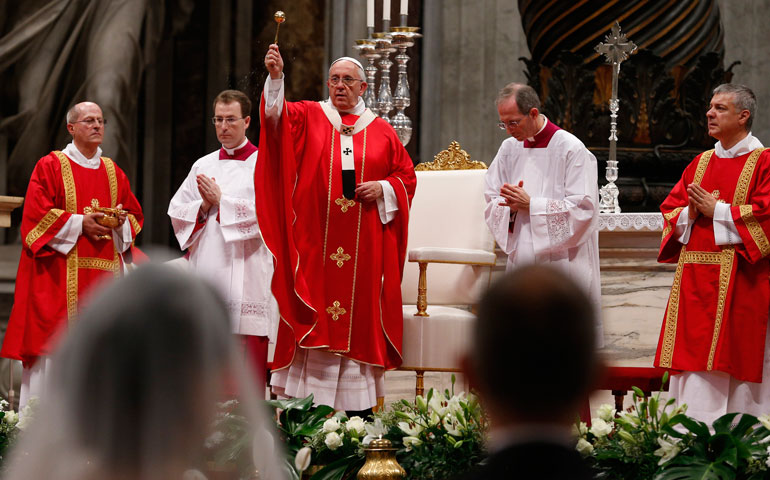 Pope Francis blesses new spouses with holy water while celebrating the marriage rite for 20 couples during a Mass in St. Peter's Basilica at the Vatican Sept. 14.

The first major initiative of Pope Francis' pontificate opens Oct. 5 in Rome, when Francis convenes the Synod of Bishops to discuss family life in contemporary society.

The theme is "the pastoral challenges of the family in the context of evangelization," and synod members will be called upon to find ways to improve the pastoral application of church teachings, ways to explain it, and ways to help Catholics live it. It will run until Oct. 15.

Excitement and anticipation for this synod have been high, partly because of a 39-question survey the Vatican sent to the world's bishops through their national conferences last year.

A letter from the synod secretariat asked the bishops to consult "immediately" and "as widely as possible" in their deaneries and parishes about issues such as contraception, same-sex marriage, divorce and other topics touching on family life.

The intention was to provide substantial consultation at the local level. The uneven implementation of the consultation caused consternation among many lay Catholics, making many wonder if this synod would be a mere episcopal talking shop.

Vatican observers point to three aspects that could make this synod different from past synods.

First, Francis is expected to be actively involved as president of the synod. The topic is very much a Francis initiative. He raised it at his first meeting with the synod secretariat three months after his election and made it a key point in his apostolic exhortation, Evangelii Gaudium ("The Joy of the Gospel") last November. The need for compassionate outreach to families in difficult circumstances is a frequent subject of his homilies, and addresses.

When Pope John Paul II attended synod assemblies, he was known to pray his breviary. Pope Benedict XVI was a quiet observer. Francis, on the other hand, at meetings likes to engage speakers with questions, jokes and comments.

This style of episcopal meeting follows the pattern Francis was used to from his time as a member of the Latin American Episcopal Conference, especially when he chaired a general meeting in Aparecida, Brazil, in 2007.

Lastly, this synod is not expected to draw any conclusions or make any proposals. It is meant to discuss the lived experiences of families today. Instead of an exhortation, this synod is expected to produce a report of the discussions that will be sent to dioceses around the world in preparation for another synod next year. Any changes to church practices on marriage and family life will come not this year, but next.

The Vatican released the list of synod participants Sept. 9. The list names 250 people, including voting members and nonvoting experts and auditors.

The voting members include 114 representatives of national bishops' conferences, 13 heads of Eastern Catholic churches and 25 heads of Vatican congregations and councils. The pope appointed 26 synod fathers; almost all of these are Europeans, 14 are cardinals. Among the nonvoting experts and auditors are 14 married couples, most of whom hold church positions, such as in family life ministry or in canon law and moral theology.

Announcing the list of participants at the Vatican, Cardinal Lorenzo Baldisseri, appointed secretary general of the Synod of Bishops by Francis, reflected that "updating of the institution of the Synod" is part of "the dynamic of the renewal of the Church ordered by Pope Francis."

"This project ... is developing in a new and renewed way, with concrete actions," Baldisseri said.

Given the list of participants, however, some were hard-pressed to find "a new and renewed way."

The lay reform group We Are Church Ireland pronounced themselves "extremely disappointed" with the list of participants.

"It is extraordinary and outrageous that no Irish Catholic married family person will be present to offer their family-lived experiences and advice to the Synod which is specifically charged to offer solutions to the grave challenges facing families in our contemporary world," the group's spokesman, Brendan Butler, said in a release Sept. 16.

Last April, We Are Church Ireland had written Baldisseri's office suggesting Mary McAleese, former president of Ireland, and lay theologian Gina Menzies, "as very suitably qualified Irish representatives to the Synod." Butler said the synod office did not respond to their request.

On the NCR website the day after Baldisseri's announcement, NCR senior analyst Jesuit Fr. Thomas Reese called the list of participants "a disappointment to those hoping for reform of the Curia and for those who hope that the laity will be heard at the synod."

Current church law governing synods states that the "cardinals who head offices of the Roman Curia will also attend," but Reese notes that the law also allows the pope to appoint additional bishops and clerical and lay observers.

"Having curial officials as members of a synod fails to recognize that they should be staff, not policymakers," Reese wrote. "They could attend the synod as staff but should not be voting members. For the most part, they should be observers and not speakers. They have all the other weeks of the year to advise the pope. This is the time for bishops from outside of Rome to make their views known.

"If Francis and the Council of Cardinals are not willing to change the makeup of the Synod of Bishops, it is hard to believe they will really fix the Roman Curia."

Reese also questioned the appointments of the 38 auditors. "Many of the observers are employees of the Catholic church or heads of Catholic organizations. ... It is hard to argue that they are representative of Catholics at large. Certainly any who think natural family planning is the church's great gift to the laity will not. And those who are church employees could fear losing their jobs if they spoke the truth."

While the list of participants is heavy with curial members and others reluctant to stray from traditional church teaching on the family, longtime Vatican observer Robert Mickens points out that Francis has also appointed staunch allies for a fresher approach, most notably Archbishop Victor Emanuel Fernández, rector of the Pontifical Catholic University of Argentina, and German Cardinal Walter Kasper.

Francis appointed theologian Fernández, 52, a bishop in one of his first acts as pope. "It is widely held that [Fernández] was the main ghostwriter of the pope's apostolic exhortation," according to Mickens. That document called for a compassionate approach toward people living in irregular marriage situations, as well as others who are seen as outside the norms of the church's moral teachings.

"The Argentine archbishop should be a key ally for the pope in his effort to re-vision a more compassionate response and praxis for divorced and remarried Catholics," Mickens said.

Kasper, meanwhile, has become known as Francis' theologian. Francis tapped him to give to give the keynote address at last February's consistory, and Kasper used the opportunity to argue for more openness to divorced and remarried Catholics. Since then, Kasper has been effectively on a world tour promoting this view.

Kasper's ideas were welcomed by many bishops. Synod fathers from Germany, Austria and Belgium are likely to aim for a greater openness to families in "irregular" situations. But Kasper has also met stiff resistance.

Just ahead of the synod, five cardinals -- including Gerhard Müller, prefect of the Congregation for the Doctrine of the Faith; and Raymond Burke, prefect of the Apostolic Signatura -- co-authored a book defending church teaching on divorce and remarriage. Remaining in the Truth of Christ: Marriage and Communion in the Catholic Church is to be published in the U.S. by Ignatius Press. These cardinals will be at the synod.

"This should make for a more dynamic gathering," Mickens said.

Whether Francis can manage these discussions is yet to be seen. Mickens hopes people don't rush to judgment. Francis has repeatedly said he wants to develop the Synod of Bishops as one of the major components for the governance of the universal church, but it is very much "a fledgling work in progress," Mickens said.

A version of this story appeared in the Sept 26-Oct 9, 2014 print issue under the headline: Synod begins amid high expectations, doubts about process.