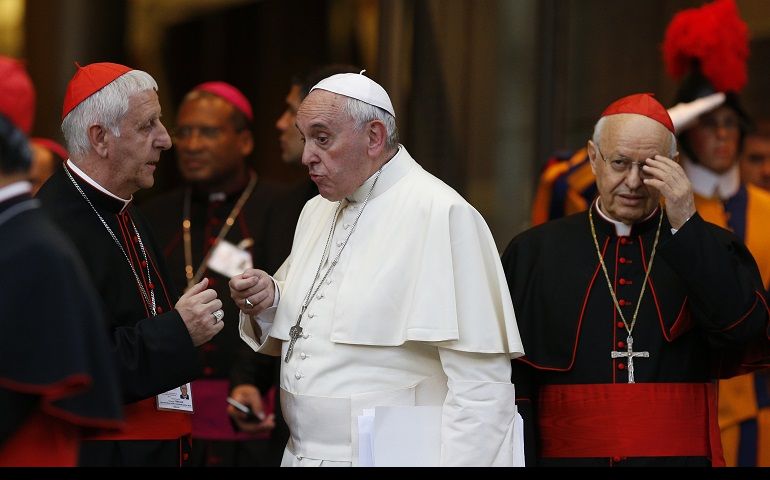 Vatican City — Wrapping up his global meeting of Catholic bishops on family issues -- which has seen both decisive shifts in tone from the Vatican and heated debates over the church's direction -- Pope Francis called on bishops to find a middle path between doctrine and reality.

Emphatically calling on the prelates to "feed the flock" and to search for lost sheep, the pontiff also directed them to avoid the temptation to become either a "hostile rigorist" concerned only with enforcing church doctrine or a "destructive do-gooder" that advocates "false mercy" instead of truth telling.

Saying the some 190 prelates at the meeting faced ''moments of desolation, tension and temptations," the pope also warned against the temptation to "transform bread into stone and throw it against the sinners, the weak, and the sick -- to turn [the bread] into 'unbearable burdens.'"

Francis was speaking Saturday evening at the closing session of the synod of bishops, one of two global meetings of prelates on family issues he has called for 2014 and 2015.

The pontiff spoke following the bishops' vote on their final report from the synod, much anticipated after a preliminary report Oct. 13 made headlines when it took an unusually open tone for the church, calling on it to listen more and to apply mercy much more widely.

The final report, the product of revisions this week of small working groups of bishops, maintains that tone but narrows the original document's openness, particularly when speaking about gay people.

Where the Oct. 13 document, for example, had a section titled "welcoming homosexual persons," Saturday's document has a section on giving "pastoral attention" to persons with "homosexual orientation."

While the bishops Saturday voted on the document paragraph by paragraph, expressing approval or disapproval with each, Francis asked for the whole document to be published, even the three paragraphs that did not garner the needed two-thirds majority for passage by the synod.

The full text was published by the Vatican alongside the tally of bishops who voted approval and disapproval for each paragraph.

The three paragraphs that did not garner the traditional two-thirds majority -- 122 of the 183 prelates who were present during the voting -- concerned gay people and the church's teaching regarding divorced and remarried persons who do not obtain annulments before remarrying.

In his talk Saturday, Francis frankly addressed some of the divisions and discussions the synod has evinced.

"Many commenters, or people that talk, have imagined seeing a church in dispute where one part is against the other, doubting even the Holy Spirit, the true promoter and guarantor of unity an harmony in the church," he said.

Referencing a talk he gave the synod when it began its work Oct. 6, Francis said "it was necessary to live ... with tranquility and also with interior peace because the synod takes place with Peter and under Peter and the presence of the pope is the guarantee for all."

"The task of the pope is to guarantee the unity of the church; to remind pastors that their first duty is to feed the flock -- feed the flock -- that the Lord has entrusted to them and try to search to welcome -- with fatherhood and mercy and without false fears --the lost sheep," he said.

Then, saying, "I made a mistake," Francis corrected himself: "I said welcome. Go find them!"

Vatican spokesman Jesuit Fr. Federico Lombardi said Saturday the pope decided to publish the synod's entire final document, including the three paragraphs without a two-thirds majority, "to ensure maximum transparency on this whole process" and to allow bishops' conferences around the world to use the document in preparation for the 2015 synod.

When addressing gay people, the Oct. 13 document had given its focus to the church itself, asking if the church community was welcoming to gay people and was giving them a "fraternal space."

The final document instead restates norms from the Vatican's Congregation for the Doctrine of the Faith regarding same-sex marriage.

In a paragraph in its section on gay people that 118 bishops voted in approval of and 62 opposed, the final document states that there "is no foundation whatsoever" to compare homosexual marriage to heterosexual marriage but says gay people "should be welcomed with respect and sensitivity."

The following paragraph, approved by the bishops 159-21, states that "it is totally unacceptable" that the church "suffer pressures in this matter and that international bodies condition financial aid to poor countries on the introduction of laws that establish the 'marriage' between persons of the same sex."

The two paragraphs without two-thirds majority regarding church practices towards divorced and remarried persons -- one garnered a 104-74 vote, the other a 112-64 vote -- essentially summarized discussions between the prelates about allowing such persons to take Communion.

The first of the two paragraphs said the prelates had "reflected on the possibility that the divorced and remarried have access to the sacraments of Penance and the Eucharist."

"Any access to the sacraments should be preceded by a penitential journey under the responsibility of the diocesan bishop," stated that paragraph. "The question is still being considered in-depth, taking the distinction between the objective situation of sin, and extenuating circumstances."

Reflecting on the process of the synod, Francis said Saturday it was like a "journey."

"There were moments of profound consolation, listening to the testimony of true pastors that wisely bring in the heart the joys and the cries of the faithful," the pope continued.

But calling it "a journey of men," the pope said "there were also moments of desolation, of tension and of temptations, of which you could mention some possibilities."

Listing those temptations, the pope began with "the temptation of the hostile rigorist."

Such a person, he said, has "the desire to close inside the script (the letter) and not be surprised by God, from the God of surprises (the Spirit); inside the law, inside the certainty of what we know and not of what we still have to learn and reach for."

"From the time of Jesus, it is the temptation of the zealots, of the scrupulous ... considered -- today -- 'traditionalists' and even 'intellectualists,'" he said.

The pope then warned against "the temptation of destructive do-gooding, which in the name of a false mercy bands wounds and cures them without first medicating them; that treats the symptoms and not the causes and roots."

"It is the temptation of 'do-gooders'  ... considered 'progressives' and 'liberals,'" he said.

Three other temptations mentioned by the pope:

Continuing, the pope said the bishops with the pontiff "have the task and the duty to preserve and serve" the church " not like masters but like servants."

"The pope, in this context, is not the supreme lord but the supreme servant -- the servus servorum Dei [the servant of the servants of God]; the guarantor of obedience and conformity of the church to the will of God, the Gospel of Christ, and the tradition of the church," he said.

Concluding, the pope referenced the upcoming 2015 synod and said the bishops "now still have a year to mature, with true spiritual discernment, the proposed ideas and to find concrete solutions to many difficulties and innumerable challenges that families face."

Pope's quotes: The church must be patient