by Heidi Schlumpf
Vatican
This article appears in the Synod on the Youth 2018 feature series. View the full series. 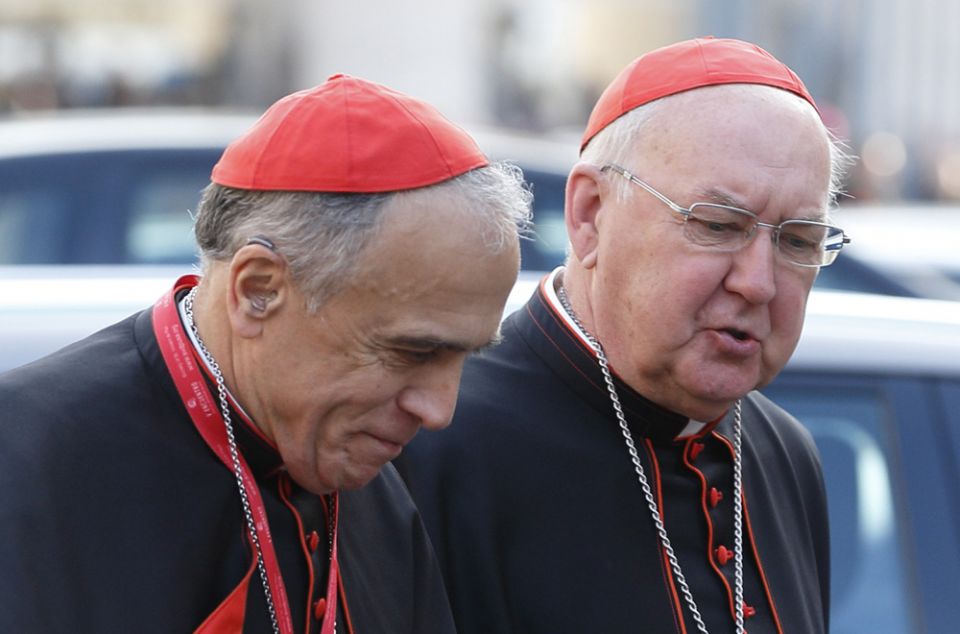 Cardinal Daniel DiNardo of Galveston-Houston, president of the U.S. Conference of Catholic Bishops, and Cardinal Kevin Farrell, head of the Vatican's Dicastery for Laity, the Family and Life, arrive for a session of the Synod of Bishops at the Vatican Oct. 16. (CNS/Paul Haring)

Vatican City — Young people crave spiritual mentorship, but such guides need to be trained to accompany younger Catholics today, according to the second round of reports from the English-speaking working groups at the Synod of Bishops.

"Though any baptized person can be an effective, even powerful, role model in the Christian life, the art of authentic spiritual mentorship requires specific training and the cultivation of real expertise," said the report from a group moderated by Cardinal Daniel DiNardo of Galveston-Houston, Texas.

That group also warned that "spiritual teachers too frequently devolve into gurus and encourage a cult of personality around themselves," according to the report.

The second of three expected written reports from 14 groups, including the four English-speaking ones, were released Oct. 16 after the second week of the Synod of Bishops on young people, the faith and vocational discernment.

During this second week, the 267 prelates and the 72 auditors discussed Part 2 of the working document, called the instrumentum laboris, which focused on "Faith and Vocational Discernment."

DiNardo's group also noted, "with a certain sadness," that "many prospective mentors today, especially in the West, are reluctant to enter into a relationship with a directee for fear that they might be accused of boundary violations."

The group led by Cardinal Blase Cupich of Chicago suggested that accompaniment by family should be given priority, with accompaniment that occurs in spiritual and psychological counseling, as well as that done in the sacrament of reconciliation, following from the family.

"Usually parents are the people who know their child best and are the ones children trust," the report from Cupich's group said, noting that the root of the word "accompany" means "to share bread with."

"It is about sharing daily life," they wrote," and parents, siblings and close friends are in this privileged position. These people need to be supported to accompany effectively and made aware of their important role in accompanying young people."

That group also reported discussing "broadening the sense of vocation," specifically suggesting that a discussion of single people "be presented in the context of them belonging to family."

"For the vast majority of our people, the family, the community and their work is the context of their vocation," the report from Cupich's group wrote. "This is, if you like, the ordinary place where a vocation is discovered."

The office wants to help people understand that "all they do in life should be seen as a sort of calling," he said in response to a question about whether the vocation of priesthood had not been emphasized enough at the synod.

The English-language group led by Indian Cardinal Oswald Gracias of Mumbai thought the section on accompaniment in the working document needed clarification about the difference between general accompaniment of family, friends and schools and the "specialist spiritual accompaniment provided by trained mentors."

That group also suggested more emphasis on the church as "pastor of souls," it said in its report.

The English-speaking group led by Pakistani Cardinal Joseph Coutts of Karachi discussed the importance of "true" accompaniment, as opposed to "pseudo-accompaniment" that is inappropriate, even if well-meaning.

"True accompaniment respects that the discernment being made does not belong to the mentor, but to the person being accompanied," that report said. "Manipulation can never be part of a true accompaniment."

Coutts' group said accompaniment should respect freedom and conscience of the person accompanied, and should be done in a "climate of friendliness, trust and warmth."

"However, it should not be so friendly that objectivity is lost," it said, adding that the Irish notion of "anim cara" or "soul friend" was a helpful image.

"The mentor should also be free to offer 'fraternal correction' when necessary, without losing the respect for freedom and conscience," the report said.

"It is important to emphasize that mentors should pray for those they are accompanying," the Coutts group's report said. "They must carry them in their heart before God."